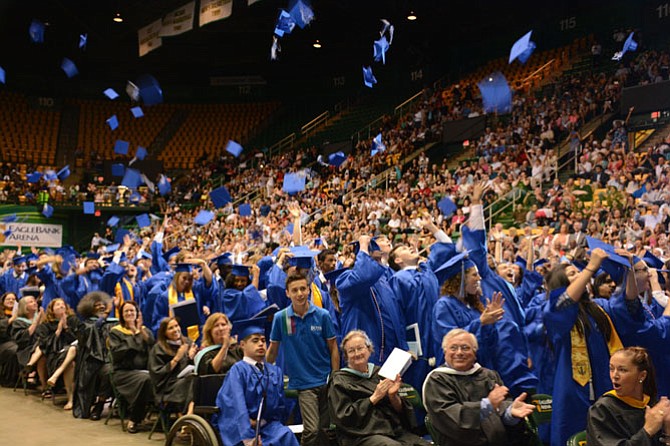 West Potomac High School class of 2016 graduates celebrate the turning of their tassels by hurling their mortarboards in the air. Photo by Tim Peterson.

What is your favorite memory from high school? 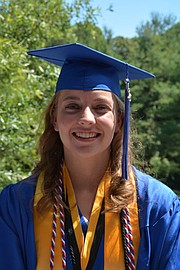 Rowan Berman plans to attend Virginia Tech and study statistics. “We went to New York with the Art Honor Society in 2014. We got to visited galleries and saw sites.” 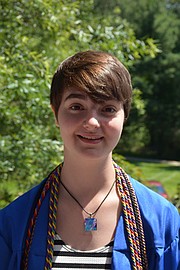 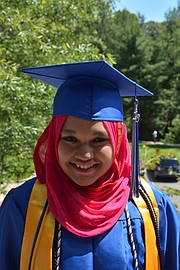 Amana Bhuiyan plans to attend Salem International University and study biology and international affairs. “Hanging with friends and being a student mentor for the Governor’s Youth Development Academy.” 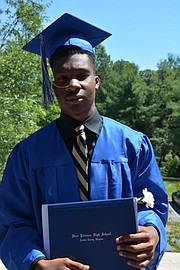 Emmanuel Opoku has been accepted to the U.S. Air Force Academy and plans to complete one year at West Potomac Academy before heading west to study medicine and fly helicopters. “During freshman year I decided I wanted to fly helicopters.”

“La decisión están en tus manos,” West Potomac High School graduating senior Alexandra Susano-Jarjuri said, sharing advice her father has given her over the years. “There will be repercussions, you can’t blame others,” she translated.

On the morning of June 20, more than 400 West Potomac Wolverine seniors sat in the Eagle Bank Arena on the campus of George Mason University experiencing the positive repercussions of their life’s work up to this point in public education.

Three qualities set this particular class apart from others that have come before it, observed Principal Alex Case.

“They stand out as scholars second,” Case summed from his interviews with West Potomac teachers on the Class of 2016, “because they were amazing people first.”

Case highlighted that just in the last two weeks, West Potomac seniors spent more than 9,000 hours participating in community service activities. That brought the total over the last four years to more than 27,000 hours, he said.

In addition to student awards, the students themselves recognize an Outstanding Faculty member. Teacher Robert Rigby said he was completely surprised to receive the honor.

“The word ‘courage’ comes from the Latin for ‘heart,’” he said back to the graduates from the royal blue-trimmed podium. “It is your courage that has brought you here; that courage will take you forth to change the world.”