Hope in the Fight Against Drug Dependency
Votes

Hope in the Fight Against Drug Dependency

Meeting highlights battles in every neighborhood. 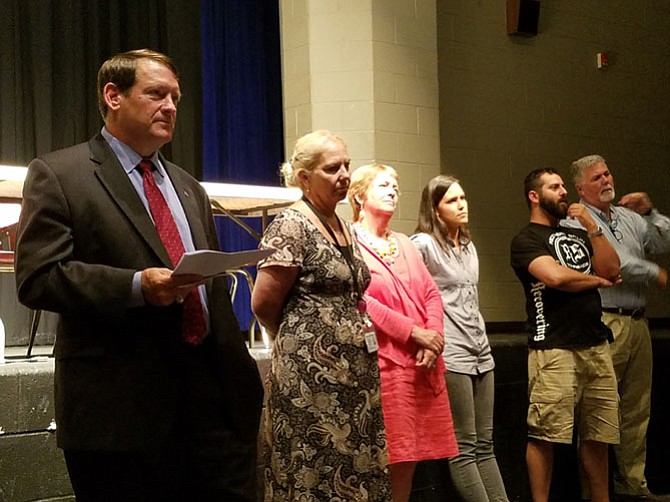 “I first got involved in this issue when there were a couple heroin-related deaths in my district two years ago,” Springfield District Supervisor Pat Herrity said. “It was an underreported problem so the board approved a motion to set up a task force. This is a battle that, frankly, everyone in this country — across our very county, in our neighborhoods, is facing. We are seeing evidence of this epidemic daily in Fairfax County.”

Herrity, along with Sully District Supervisor Kathy Smith and At-Large School Board member Jeanette Hough, hosted the informational forum which attracted an audience of 50 residents.

“The board gets alerted every time there is an incident, and let me tell you: it’s a daily occurrence,” Herrity said. “We are getting several emails a week, and a large percentage of users are between the ages of 18 and 35. Among the high school students affected, there are plenty of kids you wouldn’t suspect.”

The victims of heroin and other opioids don’t fit a profile, so no one can be too confident that a loved isn’t falling into an addiction that comes with these drugs.

Herrity added that a 4.0 GPA and a college application filled with lists of extracurricular activities and award-winning sports performances do not rule out the possibility of drug use.

The town hall meeting featured speakers from the Drug Enforcement Administration, the Fairfax County Police Department, from the school system and from professional drug counselors who presented facts about the use of heroin in Fairfax County.

In his talk, Fairfax County Police Lieutenant James Cox said that during the previous weekend, there were more than four overdoses. Cox added he received a call about an overdose during the two-hour town hall meeting.

Herrity said that those who went to the town hall meeting came away with a message of hope. Among words of encouragement, the presenters let their audience know how to get help here in Northern Virginia.

“This was a meeting to make sure people know there is a problem across all populations of Fairfax County, and on top of that, the depth and breadth of the problem,” Herrity said. “We also let everyone know where to get help, that there is hope, and to let people know what we in the county are doing about it. The town hall structure also gave us the opportunity to hear what members of the community think we should do about it.”

Aside from specialists and county officials, there were also people at the town hall sharing their personal stories.

Rona Powell, mother of a Centreville High School student who lost her life this past March to a prescription drug overdose, was also in attendance and addressed both the audience and the cameras from local Channels 5 and 7.

Despite her daughter’s tragic death, Powell said she came away from the event — in the same place where her beloved daughter went to school every day just months before — with hope.

“I think this shows that there’s hope for this community, for people throughout the country to be able to take hold of these addictions and these drugs and to give these kids education and support. Tonight, it felt like I wasn’t alone,” she said.

Powell added that since her daughter’s loss, she is dedicated to preventing such lethal addictions from affecting other families. She wants to be an advocate for other parents in her position.

Herrity, who has served on the Board of Supervisors since 2009, said that, from what he’s seen, the rise of opioid abuse has been on a steep rise for the last five years. These strong prescription painkillers are highly addictive. On the flip side, Herrity explained, they are commonly prescribed for minor surgeries and when the patient’s pain subsides, the pills remain in medicine cabinets for other household members to find and try one — or more.

“It starts in the medicine cabinet,” he said. “Someone in the family gets a prescription for pain pills like oxycodone. Then, another member tries a tablet. Then, their life quickly becomes ‘chasing the dragon.’ The street value of an oxycodone pill, for example, can be $80.”

This is where the addiction can morph into a heroin dependency. A much cheaper drug, heroin can be snorted or injected, and produces similar side effects and sensations of the prescription drugs that began the addiction in the first place. A heroin addict in recovery for eight years also addressed the crowd, showing firsthand that recover from such a potent substance is possible.

Herrity said that while awareness is step one, he has already put motions before the board that will result in war on what seems to be such easy access to these lethal substances.

“At the town hall, we discussed a motion before the board to get licensed drug counselors back in schools,” Herrity said, explaining that such professionals were removed from the public school system roughly three years ago. “Of course seeing this initiative come to fruition will take time, but the motion to work on the idea was passed. The Community Services Board is seriously looking into making this happen right now.”

Herrity has other ideas too, but he emphasized that it all comes down to first and foremost spreading the word. He said he wished that there had been more attendants at the Centreville High School meeting.

“The biggest public feedback from parents that had children in recovery was that we need to get the word out,” he said. “So many of these parents had no idea what their kids were going through. We are committed to ensure that we have the most educated possible community in order to prevent further tragedy. In addition to getting these counselors back in schools, we need to get these prescriptions out of medicine cabinets.”