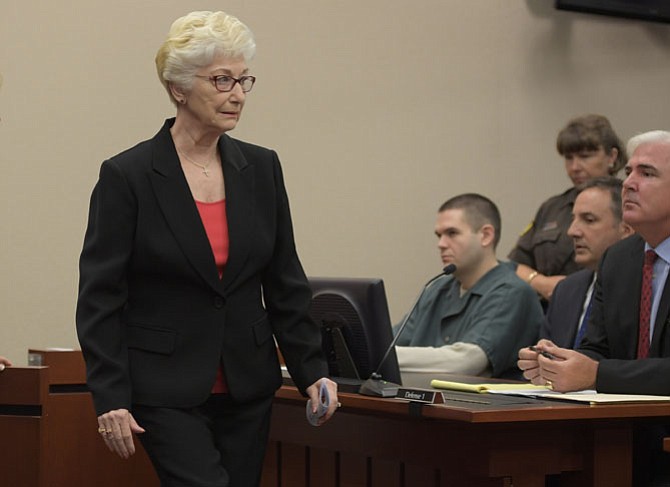 FAIRFAX VA, JUNE 24: Anne Geer, left, walks past Fairfax County police officer Adam D. Torres, 2nd left, after she read a statement to the judge for Torres' shooting of her son, John B. Geer to death as he stood unarmed in the doorway of his Springfield home in August 2013. Torres was sentenced today, he pleaded guilty to involuntary manslaughter in April. Photo made at the Fairfax County Courthouse in Fairfax VA, June 24, 2016. (Photo by John McDonnell/Pool/ The Washington Post) John McDonnell 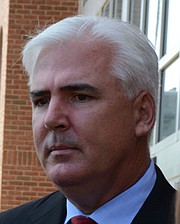 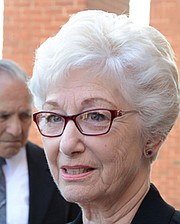 Having already heard and been opposed to the potential punishment for Adam Torres at the plea hearing, confirmation of the 12-month jail sentence was upsetting to John Geer’s mother Anne.

Statement of Thanks from the Geers

In addition to her remarks in court, Anne Geer released a statement thanking the media for their coverage of her family’s saga, and the progressive policy work of the Ad Hoc Police Practices Review Commission:

“The media have made important contributions not only in keeping the public informed of the progress herein but keeping us apprized of the bureaucratic lack of transparency and cooperation, of the stonewalling, politics and secrecy, which have undermined the character of our justice system as it applies to this action. We thank you all for your dedication and especially for your accuracy in this particular case.

“And last but not least, we would like to thank the members of the Ad Hoc Police Practices Review Commission for the hundreds of hours and hard work they contributed to making important guidelines for use of force, accountability and transparency within the Police Department. Full implementation should make drastic improvements in the way the police community interacts with its citizens, thus providing a valuable model for other jurisdictions in our nation. We look forward to that.” 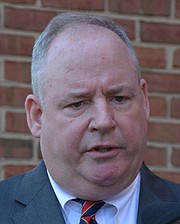 Commonwealth’s Attorney Raymond Morrogh said he felt the 12 months was “appropriate,” though not the ideal outcome in the shooting death of John Geer.

For the first time in its three-quarters of a century in existence, a Fairfax County Police officer has been convicted and sentenced after an officer-involved shooting death.

After pleading guilty to felony involuntary manslaughter in the shooting death of Springfield resident John Geer, former Fairfax County Police Officer Adam Torres could be a free man within a matter of weeks.

Torres was set to go to trial April 18 for murdering Geer, shooting him in the chest with his service weapon in August 2013, when the defense and prosecution announced the surprise agreement.

Smith spoke to a crowded courtroom that he had “reached a solution that may not please everyone.” But he said he hopes it brings “some measure of justice” to Geer’s family, Harrington and their two daughters.

Following his release, Torres will serve a three-year probation period. Since his time already served counts toward the sentence, Commonwealth’s Attorney Raymond F. Morrogh said Torres could be released within days or weeks. Typically in year-long sentences, Morrogh explained, inmates exhibiting good behavior can be released in as few as 10 months.

“It’s insulting to suggest for the crime of murder someone would only spend one year in jail. John will spend forever in his grave. I ask: Where is the justice for John?”

Torres’ attorney John F. Carroll said that Torres has been a “model inmate” in his time in the prison. After the Geer shooting, he was placed on administrative leave before being fired many months later. Torres ran the intern program successfully, Carroll said, and exhibited “no indications of a continuing problem.”

ANNE GEER, John’s mother, spoke at Torres’ sentencing hearing, the final witness in the case. Clad in a black suit, she walked past Torres and his attorneys, keeping her eyes fixed in front of her.

Anne Geer had already heard of the potential punishment for Torres at the plea hearing, and the confirmation of the 12-month jail sentence was upsetting to her.

Anne Geer cited the great length of time she and her family didn’t know any details of her son’s death, including the name of the officer who shot him. She said her John “was executed by a police officer” and that Judge Smith’s sentence “completely negates the intent to kill.”

“If I went out and shot and killed somebody,” she said in interviews following the hearing, “I’d never see the light of day again.”

The police and county released virtually no information about the case for 17 months. After the Geer family filed a $12 million wrongful death lawsuit that also called for the release of incident information, a court order forced release of details and the name of the officer who fired the fatal shot.

“It’s Insulting to suggest for the crime of murder someone would only spend one year in jail,” Anne Geer said. “John will spend forever in his grave. I ask: Where is the justice for John?”

Torres was among several officers who responded to Geer’s residence after his longtime girlfriend and mother of his children Maura Harrington called the police.

Geer was upset over hearing that she was planning to move out. He was throwing her belongings out on to the lawn.

A 40-minute conversation took place between Torres, another officer and Geer, while Geer stood in the doorway of his home with hands resting above his head on the doorframe.

Torres claimed to have seen Geer drop his hands suddenly and reacted quickly and shot Geer. His version wasn’t corroborated by the other officers with him on the scene.

Torres gave an apology at the plea hearing in April, but had no response or statement at sentencing.

In a brief interview following the proceedings on June 24, Torres’ attorney Carroll was asked whether his client truly thought he had done anything wrong.

“He absolutely has remorse,” Carroll said, adding Torres expressed that as part of the plea.

Carroll repeated that “many of the facts” of the case “are not in dispute” and that the agreed upon sentence was “a good resolution for everyone.”

Commonwealth’s Attorney Morrogh, also speaking after the sentencing, said he felt the 12 months was “appropriate,” though not the ideal outcome. “It’s a fact of life you can’t please everyone.”

Morrogh said he would’ve preferred to try the case, but acknowledged it’s “very difficult to convict a police officer … you can’t second guess them.”

By avoiding trial, the family also avoided the possibility of one of Geer’s daughters being forced to testify.

Fairfax County Board of Supervisors Chairman Sharon Bulova and Police Chief Edwin Roessler released individual statements in response to the ruling, mailed together.

“The death of John Geer was a tragic event and a painful chapter in Fairfax County history,” Bulova’s statement reads. “With today’s sentencing, the justice system has done its part. Although Adam Torres’ act cannot be undone, there are many things Fairfax County can do to ensure future tragedies such as this never happen again. The Board of Supervisors and the Fairfax County Police Department have worked together to implement policy changes recommended by the Ad Hoc Police Practices Review Commission. These changes are reengineering the way officers are trained to respond to critical incidents and the way the Police Department and the County communicate information to the public. We are committed to promoting community trust and making our Police Department a national model moving forward.”

In his statement, Roessler said, “My thoughts and prayers remain with the Geer family, the friends and loved ones of Mr. John Geer, the community we proudly serve and the men and women of the Fairfax County Police Department. We support the judicial process and the Office of the Commonwealth's Attorney. The action of one former employee is not reflective of the honorable work performed by the members of our Department, sworn, civilian and volunteer.”

Torres was released at 8am on Wednesday, June 29, five days after the sentencing.