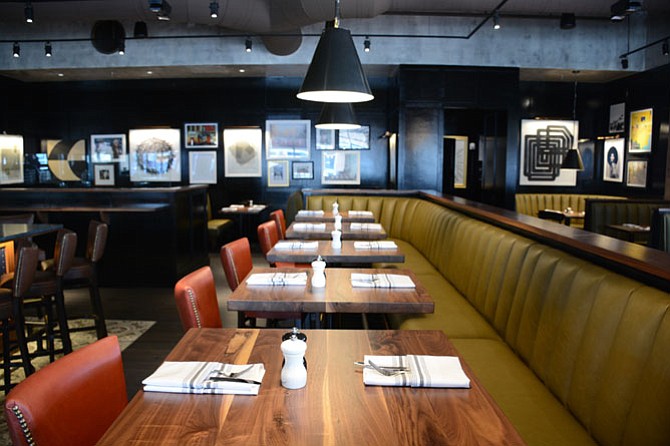 The dining area of Burtons is divided into several different layouts with slightly different feels and ambiance. Photo by Tim Peterson.

From left, Burtons Grill & Bar chef Dylyn Coolidge and his daughter Sofia of Del Ray, and Burtons General Manager John Moszocki of Lorton work in February to prepare the restaurant for its March opening.

The Big 8: milk, eggs, fish, crustacean shellfish, tree nuts, peanuts, wheat and soybeans. These represent the vast majority of all food allergies in the United States. Restaurants are becoming more sensitive to how these restrict the diets of their patrons. For Boston-based Burtons Grill & Bar, making their menu as accommodating as possible for multiple food allergies has become a major part of the business.

“It’s not just tolerated, but embraced,” said chef Dylyn Coolidge, a Del Ray resident who’s been working in restaurants in the Washington, D.C. area for the last decade.

Coolidge explained that the core menu for all Burtons restaurants can accommodate all eight allergies as well as patrons who require gluten-free options. Every dish on the menu has an “escape route,” meaning there’s a pre-planned alternate preparation for specific allergies.

“Thirty-five to 50 percent of our menu is available to anyone,” Coolidge said. Though he admits having the recipe and preparing and serving it safely are two different things.

“No one in the chain, from A to Z,” he said “doesn’t understand the importance of it.”

To ensure everything comes out safely, Coolidge said all staff are trained in the kitchen and undergo online food allergy education to fully understand how the food is being prepared and what the risks of a mistaken order can be.

IN THE KITCHEN, separate colored tongs, aprons and even fryers are used for preparing dishes unique to a certain food allergy. For a finishing touch of confidence, regular dishes are served on circular plates, while food allergy-specific meals come on square plates, placed by a manager who then confirms which food allergy the dish is tailored to.

Burtons founder and CEO Kevin Harron wanted to make providing options to others with dietary restrictions a priority as he and his partners developed the Burtons concept. After growing up with casual dining restaurants including Bennigan’s and Legal Sea Food, they witnessed a segment evolving.

“We saw the Baby Boomers starting to move away from casual dining,” said Harron, a Boston resident. “There were different concerns, people wanted food customized a certain way. Allergies have become a big part of doing business.”

Harron and company thought they could improve the dining experience, while attending to food allergies, without immediately becoming a high-end steakhouse. “We felt there was fertile ground in between,” he said.

Chef Coolidge is depending on actual fertile ground to power his menu, which he’s proud will be filled with largely local produce and meat (“things you should be eating now, like root vegetable cassoulet, a little duck”), change seasonally and be even a little “hip,” following current food trends.

For younger diners, there is a special a la carte menu that pulls no punches in terms of cuts of meat or full entree-level preparation. Coolidge’s fifth-grade daughter Sofia’s line-up of choice ($8) includes steak fillet, cucumber, pasta, apples and frozen yogurt for dessert.

The chef’s menu will change regularly and feature twists on typically more expensive dishes that help keep them in the more modest price point Burtons is striving for. Think stuffed avocado with crab coming in at $8. By using a little less crab, Coolidge moderates the price but beefs up the flavor and structure by adding red quinoa and scallions.

Burtons features a spacious floor plan laid out around a large central bar.

ATTENTION TO DETAIL and creativity, rather than simple cost-cutting, are part of the model. Sauces and salad dressings are prepared from scratch, in-house, rather than purchased from vendors, and they’ll roast their own meat for pulled pork.

Before Burtons had their soft opening on Feb. 29, general manager John Moszocki was making friends as a new member at the Mount Vernon-Lee Chamber of Commerce.

“The thing that most impresses me about Burtons Grill is their accommodation of food allergies,” Chamber Executive Director Holly Dougherty said in an email. “My husband has a severe nut allergy and sometimes restaurants don’t take that into account even after telling the server.”

Dougherty said she was also impressed with the way Burtons has already reached out to its community in Alexandria, Fort Belvoir and Springfield. Coolidge said they’ve been in touch with the athletic boosters at nearby Hayfield Secondary School about hosting teams after sports events, as well as doing joint activities with the Metropolitan School of the Arts.

“We’re excited to be there,” Harron said, “and hopefully we’ll be relevant and embraced by the community, we’re going to do our very best.”