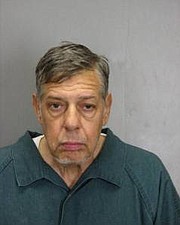 Paul Guida, 68, of Falls Church died while in custody at the Fairfax County Adult Detention Center.

After a determination from the medical examiner that Falls Church resident Paul Guida, 68, died of natural causes while in the Sheriff’s custody at the Fairfax County Detention Center, Commonwealth’s Attorney Raymond F. Morrogh concluded there was no evidence of criminality associated with involved law enforcement or staff at the jail.

Guida died Oct. 17, 2015. He was taken into custody at the beginning of that month after an alleged third offense of violating a protective order, and failing to appear in court, Sept. 30. Guida was scheduled for trial Oct. 19.

Guida was in the jail’s infirmary: He had a medical history of hypertension, congestive heart failure and diabetes mellitus, according to pathologist Dr. Jocelyn Posthmus, who performed Guida’s autopsy.

Morrogh’s report dated Feb. 19, 2016, says Guida and the other inmates receiving medical attention were being checked regularly, every half hour, by prison staff, who changed shifts over the course of the day beginning at 6:40 a.m.

PFC Jahan Brown was on duty in the afternoon until his shift ended at 6:37 p.m. and noted that at dinner, Guida refused to eat and was in pain all over his body.

Master Deputy Sheriff David Kennon, Brown’s relief, first observed Guida on his bunk when he came on post: He was lying down, breathing and apparently sleeping, Morrogh’s report said.

The report doesn't say whether Guida received any additional medical attention after his observed conditions around dinner time. In a follow-up email, Commonwealth’s Attorney Morrogh responded that logs from previous nights showed Guida’s eating habits and pain were regularly discussed during meetings with the nurse on site.

“Everything seemed routine until they went to get Mr. Guida and he wasn’t breathing,” Morrogh said in the email.

Around 10:30 p.m., Kennon began taking inmates to see the nurse for routine medication dispersal. Guida was kept near the end of the line because the dressings on his legs required regular changing. At 10:58 p.m., Kennon returned from taking the inmate next to Guida to the nurse, and saw that he wasn’t breathing.

Kennon called the nurse, Gloria Ephraim, who found that Guida didn’t have a pulse. Additional nurses were called, they performed CPR on Guida and set up the Automated External Defibrillator. The machine advised not to shock Guida, who was then transported to Inova Fairfax Hospital by Fairfax County Fire and Rescue paramedics.

Doctors at Inova pronounced him dead after trying to revive him.

Lt. Steve Elber, a representative from the Sheriff’s Office, said he was unable to answer additional questions about the events of the day Guida died because an administrative investigation is now underway.