Mount Vernon: Raising an Assistance Dog Only To Say Goodbye

For 40 years, the nonprofit Canine Companions for Independence (CCI) has been raising and training service dogs for people with a broad spectrum of disabilities. CCI enlists both volunteers and professionals to raise dogs so that they can improve lives all over America — from wounded veterans to people affected by other physical setbacks, the only exception being blindness. And, when all is said and done, CCI ensures that these prepared, caring dogs go to their new owners at no cost.

Long-time Alexandria resident Renee Priore is a CCI volunteer who has raised two dogs in the last three years. Her most recent canine pupil, Champ II, was recently selected as a breeder for the program. 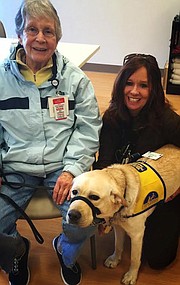 “I raised Champ for 18 months,” Priore said, “and at the end of that 18 months, last November, he was sent to Long Island for advanced training. That’s where all the puppies in the northeast region go when they complete their initial training with volunteers. In most cases, dogs would go to the training center for advanced training to become a service dog. In this case, however, Champ was an intact Labrador and had been designated to become a breeder.”

Lauren Ferraioli, the Puppy Program manager for the CCI’s northeast region, said it is a rare honor to raise a breeder as opposed to a more standard service dog. Where CCI selects the puppies as potential breeders in the first few weeks of their lives, they won’t necessarily become part of the breeding program unless they pass a slew of health and behavioral tests after spending 18 months with their initial volunteer trainers.

Ferraioli said volunteers like Priore play a major role in molding the ideal dog for breeding: Priore was invaluable in maintaining the proper environment so that Champ’s temperament and behavior could blossom.

“The volunteers begin raising the puppies when they are eight weeks of age, and Renee knew when she received Champ that it was possible he would ultimately become a breeder,” Ferraioli said. “Due to the way she raised Champ and by providing such a loving home, she added to his success as a breeder.”

The dogs, Ferraioli added, are all raised, evaluated and housed in humane, loving environments. The female breeders are limited to producing five litters. Both male and female breeders are taken care of in loving homes and treated as pets. After they retire as breeders, they are instantly adopted, and usually by the families that kept them through their breeding days.

In the time that Priore had Champ in her home, she said she accepted the responsibility of teaching him 40 different commands. CCI updates a blog that the volunteers can consult for training tips.

“The commands are particular to CCI,” Priore said. “They aren’t limited to the tricks or guidelines you would set for a normal pet dog. Then, when they get to their advanced training, they have another 40 or so commands that they will learn before CCI gives them to their permanent owner. A lot of the training that I went through with the dogs involved patience and teaching them the ability not to get too excited.”

Priore said she had been eager to get involved with CCI long before she actually signed up to raise a one of the puppies. She and her husband both retired from the U.S. Army, and she first heard of the program in its early years while her family was stationed in California.

“I have been interested for a long time,” Priore said. “I traveled all over with my husband, and retired in 1995. We were living out in California where CCI had been active, and I always knew that one day I would play a role with the organization.”

Priore, who has had her own pet dogs, said that while she is proud of her involvement with CCI, training these puppies can be an emotionally-challenging process.

“It’s a great feeling of accomplishment, but when the dogs go after 18 months, there is a big void, too,” Priore said. “A lot of people can’t do it because they say they wouldn’t be able to get rid of the puppies. It’s hard, but CCI’s motto is ‘Raise a Puppy, Change a Life,’ and that is so true.”

Ferraioli said that there are 169 active puppy raisers in the northeast region alone, which stretches from Virginia up to Maine. She added that that CCI is always looking for more volunteers, though.

“It’s the ultimate in volunteering,” she said. “It’s the best way to work with dogs, play with puppies and really change someone’s life.”