Family opens its home and heart to future assistance dogs. 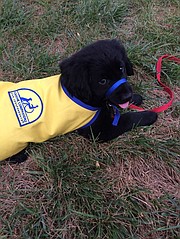 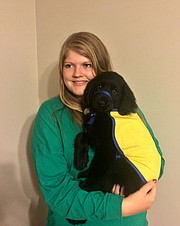 The Deely family of six, longtime Centreville residents, have been puppy raisers with Canine Companions for Independence (CCI) since 2008, when all four children were still living at home and all hands were on deck when it came to training their household’s first future assistance dog.

Recently, the Deelys welcomed their fifth CCI puppy, a golden retriever-labrador mix named Duchess. And, if all goes according to the CCI plan, in approximately two years, Duchess will become one of the many service dogs that the non-profit organization, provides at no charge to people with disabilities.

According to the CCI website, since its 1975 inception, CCI has placed more than 5,000 trained, qualified service dogs into the hands of owners whose limitations make them eligible for full-time canine assistance. Already in 2016, 173 dogs have graduated through the full CCI training program, which all begins with families like the Deelys. These volunteers take on these puppies, nurturing and training them for 18 months, when they relinquish the dogs back in the hands of CCI for the advanced training portion of their preparation.

Cathy Deely, mother of four, said that CCI has been wonderful to work with, and that it has been an honor to be involved with a program that enriches the lives of so many people. What indirectly led her family to CCI about 10 years ago was a set of circumstances that made her own family’s needs not so drastically different from those of the people that CCI serves.

“Maggie is the main trainer in our family,” CathyDeely said. “When she was eight years old, she was diagnosed with a brain tumor and had both surgery and radiation. Before the surgery, which was on her optic nerve, I knew there was a possibility that she could lose her eyesight. Although that wasn’t a likely outcome, there had been some talk about guide dogs. Then, Maggie had an opportunity with Make-A-Wish, and I don’t know if overhearing those discussions was the reason, but Maggie’s wish was to raise a service dog.”

At the time, Maggie’s older siblings encouraged her to consider a vacation, tickets to the Super Bowl, or other experiences more common for kids to yearn for, but the youngest Deely remained firm in her decision.

“Her desire was to raise a service dog,” Cathy Deely said. “Make-A-Wish got us in touch with CCI. And, since raising one of these puppies requires the volunteers to cover all the expenses — getting them neutered, making sure they have their shots, keeping them healthy — Make-A-Wish covered all the costs of our first dog.”

“I was set on getting a dog, but my parents didn’t think we were ready to get a dog, which is a commitment for so many years,” Maggie said. “One of our contacts at Make-A-Wish suggested looking into a service dog program — a shorter commitment — and we fell in love with the idea.”

While it is sad saying goodbye to a puppy you grow to love and respect over the course of the 18-month training cycle, Maggie said that the ability to understand just how much the puppies will ultimately contribute makes it easier to let go.

“When you give the dogs back after a year and a half, CCI organizes it so that the return is at the same time as the graduations of the dogs that made it through the advanced training,” Maggie said. “So, we get to see the ceremony where the dogs who matriculated get paired up with their new families. Seeing the awesome things that our dog could one day be doing makes the ‘goodbye’ process so much easier.”

Cathy Deely said that she learned that roughly 45 percent of the volunteer-raised puppies graduate from the program to become successful service dogs. So far, two of the dogs that the Deelys raised have achieved this goal.

“The first dog we raised became a service dog for an Iraq War veteran who had lost an arm over there,” Deely said. “He came home and spiraled into a deep depression. We’ve talked with him several times over the years. He travels now, giving inspirational talks and helping over veterans get back into active lifestyles. He develops prosthetics for people in similar situations to his. The dog we raised helps him travel and do what he does for these veterans.”

Being part of such a positive domino effect is one of the many reasons that the Deelys have remained steadfast in their dedication to the program.

“My take on it is that the dog was instrumental in his recovery,” Cathy Deely said. “It’s why we wanted to do this again and again.”

The fourth dog the Deelys raised, Louisa, was their second CCI puppy to graduate and went to an 8-year-old with a muscular ailment. In learning more about Louisa’s journey, the Deelys realized that these dogs make a difference in ways one can’t even fathom.

“Louisa really helped her new owner, Emma,” Maggie said. “She had the ability to move her arms and legs, but to do so, Emma had to go to regular therapy. Louisa gave her a real incentive to work hard at her therapy, though. Petting a dog and being able to hold a leash has really helped Emma’s strength and coordination. A dog gave her incentive to give everything she had to stay as strong and she could. I get that, too. Physical therapy might seem silly or boring to a young girl, but being able to play with the dog you love is important.”

The other two dogs, which Cathy Deely said are still incredible animals, have found forever homes within the family — one with her family and the other with her sister’s family.

Generally, the CCI dogs that do not become service dogs often serve Bomb Squads and Fire and Rescue Departments. Others, as in two of the Deelys’ cases, go back to the volunteer raisers as permanent pets.

Deely also clarified that the reason for her now fulltime pet dog, Prue, not matriculating from the program was by no means due to a significant flaw. While endearing for the Deelys, Prue’s harmless yet excited bark that she still can’t always contain made her ineligible for life as a service dog.

“CCI has to be really picky, but that worked out for us,” Cathy Deely said. “Prue is an amazing dog, and adopting her as a pet has been great.”

What started out as Maggie’s childhood dream, the very first CCI dog that the Deelys welcomed into their home, was a family project. After committing 18 months of their lives to this dog and to the program, all six Deelys attended their own training in New York.

“When we started, all four kids were at home and everyone pitched in,” Cathy Deely said. “Back then, everyone had a chance to walk her and feed her. New puppies are a lot of work, and, at this point, three of the kids have gone off to college, and I just have Maggie at home, so now it’s her project.”

More than half of Maggie’s childhood has involved raising CCI service dogs, and she acknowledges that the experience has likely influenced her professional aspirations. At the very least, CCI has confirmed that her calling involves animals.

“I’ve always wanted to work with animals, and now, I do consider one day becoming one of the paid trainers at one of the CCI facilities,” Maggie said. “I plan on pursuing wildlife or environmental conservation in college.”

Cathy Deely has noticed other changes in the way everyone approaches the CCI puppies now.

“With the first dog, we were very ‘by the book,’” she said. “We didn’t bond as much because we were very conscious about keeping the dog on track. Now that we are familiar with what exactly the dogs need to know and by when, the process is a little more relaxed. I feel like I’ve gotten to bond more with our more recent puppies. So, you’d think it would get easier to say goodbye to the dogs when they go back to CCI, but in some ways, it gets harder.”

Bidding farewell to Duchess is far from Cathy Deely and Maggie’s minds though, as they currently find themselves again at the beginning of a CCI puppy-raising adventure.

“Duchess cried all night for the first week we had her, but she’s doing just fine now and is already learning fast,” Cathy Deely said. “It’s great because she’s picking up a lot of what she needs to know from Prue, who of course knows all the same words and commands we use for CCI.”

While the Deelys won’t deny all the hard work that goes into raising a CCI puppy, they said it’s definitely worth it for people who are in the right situation to be fully committed. It takes at least a village to get a CCI puppy ready for service pethood, and Cathy Deely said she appreciates other members of this village just as much as she adores the actual puppies that for a time become a part of her family.

“You absolutely, without question, have to want to do it,” Cathy Deely said. “But, aside from being a part of the great work CCI does, we also keep raising these dogs because of all the people you meet through the process. Part of your responsibility is to take the puppy you raise to classes, which are run by CCI people and are offered all over the area. They are just some of the most wonderful people you could ever meet, including one woman I have learned so much from, who is currently on her 17th CCI dog. Everyone involved with CCI is so amazing and you never feel alone because everyone, especially the repeat volunteers, are incredible resources.”