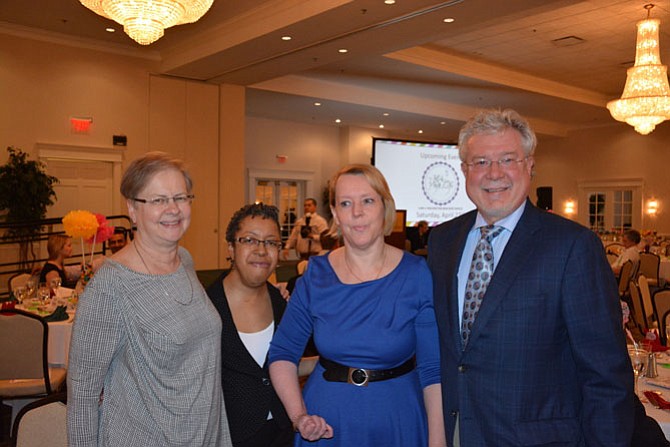 Maya Simbulan of Fairfax is thankful for being normal. The Lake Braddock Secondary School freshman would like to pursue work with computer graphics and plays electric wheelchair soccer.

She owes her recovery from a traumatic brain injury, in large part she said, to Springfield-based Brain Injury Services, a nonprofit organization that helps individuals around Northern Virginia find recovery and rehabilitation resources, to manage the effects of injuries and find a sense of community through others with shared experiences.

“This has helped me to have a normal life,” Simbulan said, “like going to school and playing soccer.”

Simbulan’s positivity and success has landed her as a speaker at BIS events and prominent roles in videos about brain injury.

ON MARCH 9, she and Annessa took the stage together to recognize other community partners of Brain Injury Services at the organization’s 11th annual Volunteer Banquet, held at the Waterford in Springfield.

Macy’s was among the business partners highlighted for giving back to the community through BIS.

“We’ve been able to purchase critical items like prescription glasses and assistive technology,” Simbulan said as she thanked the partners from Macy’s during the banquet ceremony, “and even pay for summer camps for children” who otherwise wouldn’t be able to afford it.

A first-time donor and community partner was Mike Katounas of Centreville and his business HomeWorks Painting, based in Chantilly. This year they decided to donate a portion of sales made during their annual two-week winter promotion sale to a local nonprofit. Their total contribution was $5,000.

“The work that they do, especially with kids,” was part of what drew Katounas and the HomeWorks team to Brain Injury Services. “I’ve worked with Special Olympics children, and we were able to specify the pediatric program, so 100 percent of our donation went to the kids.”

Annessa said the pediatric program at BIS serves about 70 clients, from infants to age 22.

Leaders of BIS also recognized community partners who’ve taken on brain injury survivors as employees, as finding work after a traumatic incident can be difficult, if not impossible.

“Your sense of self,” while out of work, said Christine Heiby, a co-owner of Springfield-based business Auto-Grip. “Your identity gets robbed.”

A group from Macy’s accepted the recognition from Brain Injury Services as an Outstanding Community Champion, along with HomeWorks Painting and Catalyst Media.

Christine and her husband D. David Heiby’s company is the North American distributor of a special type of automatic locking pliers manufactured abroad. They assemble the pliers in-house and then sell them, which requires a lot of repetitive work that’s well-suited to individuals regaining their concentration and organizational skills after a brain injury.

“This gives them purpose and a place to go,” Christine said. The Heibys hired three part-time employees through Brain Injury Services in February 2015 for temporary positions. But the individuals have proven they were too valuable to let go.

“They’re remarkable, the attitude they bring,” D. David said. “They work their heads off.”

“We think this is the future,” D. David continued, saying they hope to hire more employees from BIS in the future, as well as veterans who are struggling to find work.

“It’s important to give back to the community, for many who may not have those opportunities,” he said.

Jennifer Adams of South Riding, keynote speaker at the banquet, wasn’t aware of Brain Injury Services after she went through her traumatic brain injury, 12 years ago as a senior in college.

Adams was on the passenger side of a car that was turning when it was hit by another car going 70 miles per hour. Her head slammed against the window and she went into a coma for five days. It took her a year and extensive physical therapy before she returned to school.

Adams said she and her parents had to figure out resources and services by themselves, “learning as we went.

“A resource organization like this would’ve been great,” she said.

LAST FALL, in 2015, Adams began volunteering with the Pals mentoring and socializing program of Brain Injury Services, finally getting connected to a community of people who’ve had experiences like hers.

Not everyone understands the loss of memory, organization and concentration that individuals who suffer brain injuries struggle with.

Adams encouraged the nearly 200 volunteers, donors and survivors at the banquet to “Go make a difference in someone else’s life. Get out and volunteer.”