Arlington County applies for funding to improve its public transit. 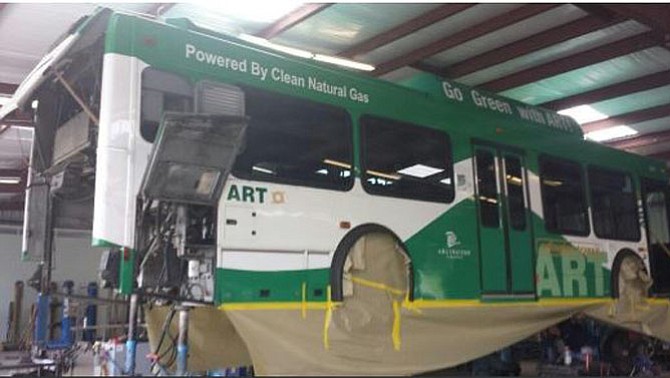 Bus Station improvement on S. Abingdon Street to bring the stop up to ADA compliance.

From better bus stops to shorter waiting times, if a series of grant applications from the regional and state authorities go through, Arlington’s public transit could see some new improvements. As part of Arlington County’s ongoing overhaul of its transportation system, the County Board approved up to $3.5 million in funding requests to the state for a variety of transit improvements.

Sarah Crawford, the Regional Transportation Planning Program Coordinator for Arlington County, said the requests tie in with the state’s plans to transform I-66 inside the beltway. Tolls collected on I-66 will be required to benefit regions affected by the tolling and will be dispensed by the Northern Virginia Transportation Commission (NVTC). For the first year of projects, the Virginia Department of Transportation (VDOT) provided $5 million in funding to meet the implementation goals of the “Transform I-66” project.

The biggest request, up to $1 million, goes to improving bus stop accessibility. All bus stops along Lee Highway and Washington Boulevard will be brought to Americans With Disabilities Act (ADA) compliance, including construction of sidewalks, shelters, benches, and furnishings. Throughout Arlington, Crawford said there are more than 100 bus stops in need of improvement, with 40 listed as deficient.

THE BUS ROUTES themselves are also targeted for major renovations. Arlington County is requesting $960,000 to rehabilitate six ART buses to be used along Lee Highway. According to the staff report, rehabilitation adds four years to the service life of the buses and delays replacement costs. ART 55, which serves Lee Highway between East Falls Church and Rosslyn Metro stations would also receive an additional bus during peak hours at a $377,447 cost. However, this funding is temporary, within five years the County would be forced to absorb the ongoing costs. Similarly, a $200,000 improvement to Metrobus 2A, increasing frequency from 15 minutes to 10 minutes, would have to be absorbed by the County after five years.

One of the flashier projects, if approved for its $250,000 cost, could be the real time information screens displaying available routes and times for buses, rail lines, bikeshare, zipcar, and eventually I-66 tolling.

“Screens provide dynamic traveller information to encourage people to make the best trip choice possible by providing all options in sort of a one stop shop,” said Crawford. “[We’ll have] 50 screens at rail stations, bus stops, offices and residential buildings in Rosslyn-Ballston Corridor.”

Screens like those installed along the Rosslyn-Ballston Corridor are already in place in the Arlington County Government building, the Commuter stores, and the Columbia Pike enhanced bus stop.

The County Board approved the funding requests, the applications for which are due on March 24. On May 5, the NVTC selects projects to recommend to the Commonwealth Transportation Board, which has final approval on June 15. If approved, Crawford said the goal would be implementation of the various projects by Summer of 2017, before the tolls are put into effect.

“We are on a bit of a fast track to get these projects on the ground,” said Crawford.

Some of the improvements were already slated for the FY 2017 Capital Improvement Plan (CIP). The staff report estimates that, fully funded, the grants could free up $2.7 million in the CIP.