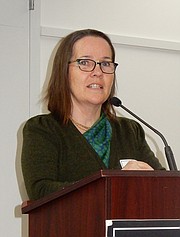 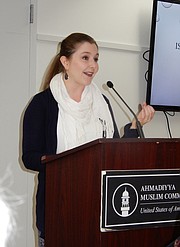 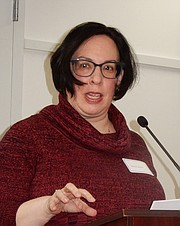 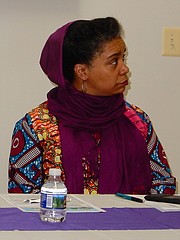 In today’s divisive world, it often seems like the nation’s leaders don’t communicate well with each other. But the women who gathered Saturday, March 9, at the Mubarak Mosque in Chantilly had no such problem.

In honor of Women’s History Month, the Women’s Association of the Ahmadiyya Muslim Community hosted an interfaith dialogue. The topic was “Women in Public Service: How Faith Inspires Nation Building.”

This association, called Lajna Imaillah, raises awareness of the importance of women in society. Said the group’s spokeswoman, Bushra Mirza: “When we come together, we have power in our voices.” On Saturday, the more than 120 attendees heard speakers espousing Hindu, Christian, Jewish and Islamic perspectives, plus the keynote speaker, U.S. Rep. Jennifer Wexton (D-10).

Ananda Vrindavani, temple president of the International Society of Krishna Consciousness in Washington, D.C., spoke first. “In Hinduism, dharma is the essence of something, and the dharma of a living being – of a soul – is service,” she said. “When we get beyond service to ourselves, we begin to grow.”

She also mentioned bhakti, or service with love for the benefit of others. “A mother’s love for her child is without expectation of anything in return – it’s pure,” said Vrindavani. “And when you serve that way, you can have a real impact.”

Born and raised in Ireland, she taught in India for 21 years. Her husband is Jewish, their son was born in India and he’s marrying a girl from London. “So where do I put my loyalty?” she asked. “Nation- and peace-building is dependent on our daily, spiritual practice.”

Similarly, the Rev. Ellen LaCroix-Fillette, a pastor at Centreville United Methodist Church, said, “Our belief in God orders the way we live our individual lives and our lives together in community.” She also noted that “There’s a wide range of beliefs among Christians, and not all denominations believe in women in pastoral service.”

So, she said, “It fills me with so much hope to see women in positions of authority and in public service. Christian living is a balance between personal and social holiness. Our inward transformation leads to our outward expression of faith. Social holiness is where women find their voice and work together in community. “We can boldly claim our place to engage in holy work, in service to our community and world … working with the most vulnerable in our society. Compassion is the inspiration for social, faith-based engagement. Sometimes, it’s one-on-one interaction to fill a need for, for example, food, shelter or companionship. It’s meeting people exactly where they are, loving them and providing assistance to them. Western Fairfax Christian Ministries is an example.”

LaCroix-Fillette said seeking justice is also advocacy “to change cultural norms or societal structures so people no longer feel in that place of social injustice.” According to Confucius, she said, “Give a man a fish, and you feed him for a day. Teach a man to fish, and you feed him for a lifetime.” But, she added, “It doesn’t help if that man has no access to a pond.”

So social justice is providing that access, she said. “We are all equally valuable in the eyes of God,” said LaCroix-Fillette. “So places without women’s voices are incomplete. As a Christian, I’m called to usher in God’s need for social justice. And I truly believe that watching women and others whose voices have been limited, step forward, is a step toward deliverance.”’

Attorney Natalie Roisman specializes in technology law and policy; but she’s also her firm’s director of social responsibility and advocates for children and families. Fighting against family detention at the U.S./Mexico border, she said, “They’re all our children.”

On Saturday, Roisman represented the Jewish perspective. “I believe women are the key to progress in our world,” she said. “They’ll be instrumental in elevating the ways in which we talk to and about each other, so the future generation doesn’t sink as low in discourse as we see today.”

She’s also on the council of a Jewish-Muslim bridge-building group, the Sisterhood of Salaam Shalom. And last year, the members traveled together to Montgomery, Birmingham and Selma, Ala., to learn more about America’s Civil Rights movement.

Much can be accomplished, said Roisman, by “ordinary people doing extraordinary things.” She belongs to two groups encouraging women to run for political office or just become involved in the political process. Quoting Supreme Court Justice Ruth Bader Ginsburg, she said, “Women belong in all places where decisions are being made.”

Roisman said women can engage in the world in many ways. “Just do it – jump in,” she urged. “You don’t have to have experience. If you believe something has to change, just do it.” She also referenced two quotes from the movie, “Black Panther.” They are: “We will work to be an example of how we, as brothers and sisters on this earth, should treat each other;” and “In times of crisis, the wise build bridges while the foolish build barriers.”

Finally, quoting Martin Luther King Jr., she said, “If you can’t fly, then run; if you can’t run, then walk. If you can’t walk, then crawl. But whatever you do, just keep moving forward.”

Presenting the Islamic perspective was Sahar Choudhary, regional president of the Women’s Association of the Ahmadiyya Muslim Community. Born in Pakistan, she has a degree in Conflict Analysis and Resolution from GMU. She said Islam means faith and submission to God and to work for the betterment of humanity.

“The Holy Quran is my code of conduct, telling us, ‘Do not forget to do good for each other,’” said Choudhary. “Service of mankind is the essence of Islam, and an Islamic community that doesn’t believe this way isn’t truly Islamic. So I try to be an agent for good.”

She said women “need to become empowered to become the change agents, and my faith empowers me with the rights to do this.” Stressing that there have been great Muslim women trailblazers throughout history, she mentioned some of them and told how they improved society in areas including math, science and education.

“Muslim women are still involved in leadership and politics, and some are even Nobel Prize winners,” said Choudhary. “But they wouldn’t have gotten where they are if their faith was an obstacle to them.” She also called mothers nation-builders because they raise children who grow up to be leaders and to excel in their fields. “They share the values they received from their mothers,” she said. “So the role women play in nation-building starts at home.”

“When we teach the values of love, sharing and service of mankind – blind to color, religion, culture, etc. – we do a great service to others,” continued Choudhary. “Mothers sharing their skills, volunteering in schools, beautifying their communities and helping the most vulnerable is public service. And despite our minor religious and cultural differences, we’re all here today because we care about service to others.”