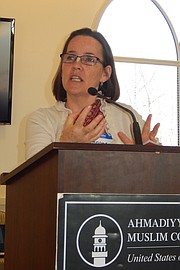 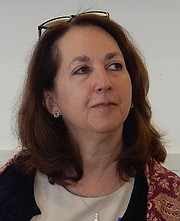 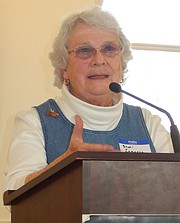 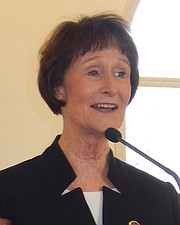 ‘We’re Diverse, but One Human Community’

During the March 18 event at the Mubarak Mosque in Chantilly, women representing a variety of religions explained their beliefs to others. They also illustrated how what women do in their daily lives can impact the future.

Nakasha Ahmad, of the Ahmadiyya Muslim Community, has a master’s in philosophy and is a former college professor. She said Ahmadiyya Muslims view activism as “campaigning for social change, social progress and a most just society to right wrongs and alleviate injustices.”

She said the five pillars of Islam are a declaration of faith, prayer, giving to the poor, fasting during Ramadan and going to Mecca. Also important are connecting with others and being empathetic and sympathetic. For example, said Ahmad, “We fast to empathize with and be compassionate toward people who are hungry.”

She also said criminal justice should be aimed at reformation, rather than punishment, and mercy should be used to get people back on the right path. “Pardon and forgiveness are just as important as punishment,” she said. Regarding racial inequality, said Ahmad, “We believe no one people has superiority over another. We are diverse, but we’re one human community.”

“So what is the role of women?” she asked. “Men and women have equal responsibility to work for social justice.” In addition to the Holy Quran, she said Ahmadiyya Muslims also rely on the hadith — oral traditions from their prophet. “It’s important to speak truth to power,” added Ahmad. “If you see something you disapprove of — and you see injustice — act and speak up against it.”

While noting that Islamic women may go into whatever profession they want to, she said the importance of motherhood is also emphasized. She said it’s seen as a way “to create a more just and peaceful society by raising children who have a conscience and are morally engaged with their communities.”

Citing activist Malala Yousafzai as an advocate for girls’ education, Ahmad said women in general “write letters and op eds to make their voices heard. We also meet with people on Capitol Hill to discuss issues important to us.”

She further noted Ahmadiyya Muslims’ involvement in Humanity First, a non-religious, international nonprofit that runs programs such as Water for Life, which brings clean drinking water to poor areas of Africa. “We also believe that prayer is more effective than fire or water,” said Ahmad. “And we all are able to pray to advocate for social change.”

Next at the podium was county Board of Supervisors Chairman Sharon Bulova. Recalling the vandalism to the Mubarak Mosque shortly after its specially made windows were installed, she stressed what happened afterward.

“The community came out with flowers and wishes of good will, as did the county government,” she said. “And that speaks toward the type of people we have here in the county; activism was when our neighbors spoke up [against the vandalism]. And when, more recently, threatening phone calls were made to Jewish community centers, all religions came out to express their support and concern.”

Bulova said all issues are women’s issues and require “a moral prism through which we look at them. But a key element in activism is also listening and understanding where other parties are coming from.”

A teacher in the audience told Bulova that, over the past few months, she’d been “bombarded with national issues” and wondered how to respond on a local level. “Right now, the Board of Supervisors is considering the FY ’18 budget, so we’re hearing from people concerned that finances won’t be provided for the services important to them,” replied Bulova. “But it’s also about what we don’t hear; and if we don’t hear from people, we assume everything is OK.”

As for the larger issues, she said, “I’m also concerned about what’s happening nationally. I’m glad people in Fairfax County are speaking out against hate speech when others feel liberated to say ugly things they never would have said before. And when they hear it, they need to say, ‘That’s not OK; that’s not the way I feel.’”

Pediatrician Susan Kohn belongs to Temple B’nai Shalom in Fairfax Station and is a member of the Sisterhood of Salaam Shalom – a group of Muslim and Jewish women. She said, “Doing little kindnesses to people you see every day” is also activism.

And April Dalton, of the Church of Jesus Christ of Latter-day Saints, shared that, a year ago, her church was called on to help refugees fleeing to Greece. “I was so upset and wanted to help them,” she said. “I got a list of things to do from Catholic Migration and Refugee Services, and it’s been so empowering to bring an international issue to our, little city. We now need 20 cribs and other baby items for 20 women who just got here from Afghanistan.” Anyone wishing to donate toward this effort may contact her at aprildalton6@gmai....

Dalton said she can also do her part to help the world by going to PTA meetings, writing her congressmen and raising her children to be nice to people who aren’t nice to them. Agreeing, Ananda Vrindavan, temple president of the International Society of Krishna Consciousness in Washington, D.C., said, “Conversation is a powerful thing. And creating opportunities for children to talk to others can help them become independent [thinkers].”

“We tend to hang out with our own groups,” added Kohn. “But we can teach children there are lovely people outside their own group. After 1-1/2 years of existence, the Sisterhood of Salaam Shalom brings people together who wouldn’t normally talk to each other. And in the past few months, our membership has grown because they know this is an organization that watches each other’s backs. So I encourage people to find organizations like this.”

Summing up, Ahmadiyya Muslim Fazeela Wadan said, “We need to feel the pain of others, create compassion in our children and become advocates for them in the world.”

In today’s political climate, women can often feel powerless. But more than 100 women of various faiths came together recently to learn how they can and are making a difference in the world around them.

Hosted by the Women’s Auxiliary of the Ahmadiyya Muslim Community, the event was held March 18 at the Mubarak Mosque in Chantilly. It’s presented each year in commemoration of Women’s History Month, and the theme this time was “Activism Through Faith: How Women Make an Impact.”

Welcoming everyone was Sahar Choudhary, regional president of the Ahmadiyya Muslim Community’s Virginia chapter. She said her religion “categorically rejects terrorism in any form and endorses the separation of church and state. We champion universal human rights, protection of minorities and the empowerment of women through education.”

Ananda Vrindavan, temple president of the International Society of Krishna Consciousness in Washington, D.C., was the first speaker. Born and raised in Ireland, she taught in India for 21 years. “It’s sad that evil happens when good people don’t stand up and say something,” she said. “But you don’t want to lose yourself in the process, so it’s a balance.”

In Krishna Consciousness and the Bhagavad Gita (Hindu scripture), she said, “Sometimes activism may demand that we fight or that we walk away. Ultimately, we’re souls beyond our bodies, and the Gita also teaches compassion — you can’t even kill an ant. So the challenge for us as women is to discern the best impact we can have in any given situation.”

So, said Vrindavan, “My faith is in both stepping back from the world and stepping into the world, from a place of good intention, and seeing where I can best serve. So how do you take the principles of your spiritual practice into the world? To help us decide, we have six Gita values: Equal vision – we’re all equal; choice – we have free will and must live with the results of our choices, affection and humility – deal with each other with [both these things], live life without cruelty, and live by example.”

“When you live in the real world, black and white disappear and there’s a lot of gray,” she added. “So be alive and awake and as active as you can.”

Pediatrician Susan Kohn belongs to Temple B’nai Shalom in Fairfax Station and is a member of the Sisterhood of Salaam Shalom — a group of Muslim and Jewish women. Representing the Jewish viewpoint, she said, “Women must not be silent in the face of discrimination or injustice to others. We believe in caring for the stranger and repairing the world.”

Noting that Emma Lazarus was the Jewish woman who wrote the words inscribed on the base of the Statue of Liberty, Kohn said many other Jewish women, such as [Supreme Court Justice] Ruth Bader Ginsberg, work to better people’s lives every day. “We have to try to make a difference, even when the task is daunting,” said Kohn. “And we have to speak up when our leaders don’t. Salaam Shalom was founded to bring Jewish and Muslim women together and speak out against injustice.”

Next came Shari Zamarra, a Catholic involved with the Fairfax County Communities for Action Youth Task Force. She’s also a member of Virginians Organized in Community Engagement. She’s also marched and protested and does so monthly outside the NRA building.

Matthew 25 is her parish’s mission statement. “God judges us by asking what we’ve done for the poor and the most vulnerable among us,” she said. “Now my work is serving poor pregnant women and supporting education in Guatemala.”

Zamarra said she’s inspired by Dorothy Day, a famous Catholic who helped establish special houses of hospitality to help those in need. Day was also an activist who worked for social causes such as pacifism and women's suffrage. Zamarra also follows the words of Pope Francis, who said, “Each person has a mission of social responsibility.”