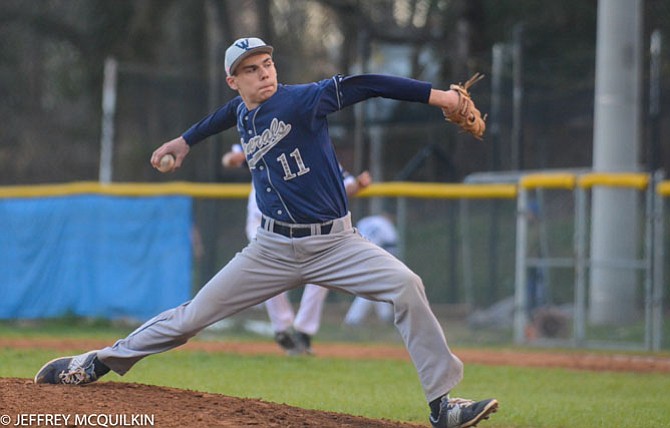 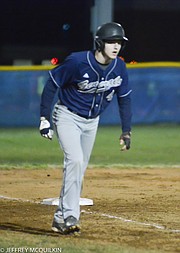 In preparation for its first game in more than a week, the Washington-Lee coaching staff opted to keep staff ace Teddy Herbert off the mound an additional evening so the senior could pitch against Conference 6 rival Yorktown the following night.

Instead, sophomore Ryan Edelstein started on the mound for the Generals on Monday. Facing a West Potomac lineup that includes William & Mary-bound slugger Jamie Sara, W-L’s No. 3 starting pitcher gave his team a chance to win — and the Generals capitalized.

Edelstein held the Wolverines to one run in five innings before running into trouble in the sixth, when West Potomac tied the score at 4 with a three-run frame.

The Generals scored the go-ahead run on a wild pitch in the top of the seventh, and W-L senior Noah Winslow closed out the game with a scoreless inning of relief.

“Ryan Edelstein did a good job, I thought,” said W­-L head coach Doug Grove, who is in his 22nd season with the Generals. “He throws slow, and slower, and then his fastball jumps on them. ... He throws a lot of strikes. He’s about 75 percent strikes ... so far and he can throw three pitches for strikes: his fastball, change and curve ball.”

What was Edelstein’s approach?

“I was just trying to go at them,” he said. “My curve ball was pretty good today and I was able to get it over for strikes. ... I had pretty good fastball command today. I was running a two-seamer on the [corner] and that worked pretty well.”

Edelstein allowed just three hits in the first five innings, one of which was a solo home run by West Potomac pitcher/third baseman Brandon Floyd in the second inning.

The Wolverines produced four hits in the sixth inning, including an RBI single by left fielder Patrick Aitken and a two-run single by Floyd, but it wasn’t enough.

“We’re just not hitting yet,” West Potomac head coach Jim Sullivan said. “Anybody who can throw strikes and throw more than just a fastball for a strike is giving us trouble right now.”

Floyd, who finished 2-for-3 with a home run and three RBIs, said the Wolverines’ approach at the plate was flawed.

“I think a lot of us were too eager to hit [Edelstein’s pitches] because of how slow [they were] — no disrespect to him; he was throwing really good,” Floyd said. “But we were too eager to try to hit the long ball or try to hit it hard somewhere instead of [taking] the [patient] approach and wait on his slow curve ball and his fastball.”

Winslow (Lynchburg) picked up the save for W­L, allowing one hit in a scoreless seventh inning.

Washington-Lee took a 2-0 lead in the top of the second with RBI singles from center fielder Chris Brady and left fielder Foster Gray.

The Generals led 2-1 entering the sixth inning before extending their lead to three runs with RBI doubles by shortstop Andy Collins and third baseman Will Stengle.

Collins and Stengle each had two hits for the Generals.

After dropping its first two games of the season, W-L responded with three straight victories, beating Langley, George Mason and West Potomac to improve to 3-2.

Grove said the Generals have improved at the plate.

“When things break for us,” he said, “we’re pretty good.”

West Potomac fell to 2-4. The Wolverines’ four losses have come by a combined seven runs.

“Right now, we’re just not playing very good, all around,” Sullivan said. “There were some plays in the field that I think we should have made today that we didn’t make [that] cost us runs. We get runners on base and our No. 1 and 2 batters take called third strikes against [Edelstein]. Those guys aren’t going to do that very often, but they did it tonight.”

W-L will host rival Yorktown at 6 p.m. tonight. The Generals will host defending state champion Madison at 6 p.m. on Friday, April 1, and Colonial Forge at noon on Saturday, April 2.