Wolverines win 9 of 11 prior to Tuesday’s loss to Annandale. 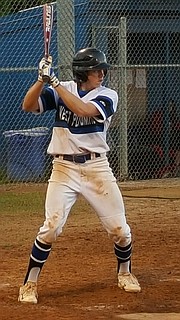 Leading off the bottom of the sixth inning, West Potomac right fielder Rocky Iboleon got the fastball he wanted and drove it to deep left.

With Annandale leading 4-2, a home run would have been a much-needed boost for a West Potomac team looking to extend its win streak. On Tuesday night, however, the Wolverines --- and Iboleon’s fly ball --- fell short.

Iboleon’s deep drive landed near the fence for a double, but the senior would be stranded at third base. Annandale added a pair of unearned runs in the seventh inning and won 6-2 on April 28 at West Potomac High School.

Did Iboleon think his deep fly ball was gone?

It had been one month since the West Potomac baseball team “missed” when it came to the final score. After losing to Paul VI, 12-0, on March 28 during a frigid night in Vienna, the Wolverines won seven straight games prior to Tuesday’s loss to Annandale. During the streak, West Potomac staged seventh-inning comebacks against Marshall and South County, thumped Lake Braddock, 11-4, and surged to the top of the Conference 7 standings.

Jim Sullivan said the 9-2 start was West Potomac’s best during his 10 years as head coach, and the seven-game win streak was the longest since he’s been with the Wolverines.

“I think we’ve just had a lot of confidence and we know each other,” sophomore shortstop/pitcher Luke Belanger said. “We’ve been playing together for a while and we know what we can do and we come out and we play hard.”

Belanger pitched four innings in relief on Tuesday. He allowed three runs --- one earned --- on five hits while walking one and striking out three.

“I thought we got a very good pitching performance from Luke,” Sullivan said. “I thought he did a very nice job. If it hadn’t been for the [seventh-inning] error, he [would] have given up [one run].”

Junior right-hander Brandon Floyd started and suffered the loss. He pitched three innings, allowing three runs on five hits while walking one and striking out two.

West Potomac left the bases loaded in the first, and left four runners in scoring position for the game.

“Courtney’s a good pitcher,” Sullivan said. “… He kept us off balance [and] we didn’t get the hits when we needed them. We’d get guys over to second and third and then they’d die there and that’s not a recipe for success.”

Senior catcher Tom Nicholson went 1-for-3 with an RBI. Senior outfielder Kent Sullivan, senior second baseman Joseph Ranney and Iboleon each had one hit for the Wolverines.

Tuesday’s loss dropped West Potomac’s record to 9-3, but the Wolverines remained atop the Conference 7 standings at 6-1 entering Wednesday’s game at West Springfield.

West Potomac reached the conference tournament final last season, where they lost to West Springfield. The Wolverines have their sights set on returning to the championship game.

“We don’t like to look past too many things, but that winning streak, it has helped with confidence,” Belanger said. “We believe we should easily be there. … I think we can win that championship.”

“They’re anxious to try to get back there and win it this time,” Sullivan said. “That’s the goal. They really want to win that conference championship and I think they’ve got a shot. We’re in first place right now, so obviously we’ve got a shot.”