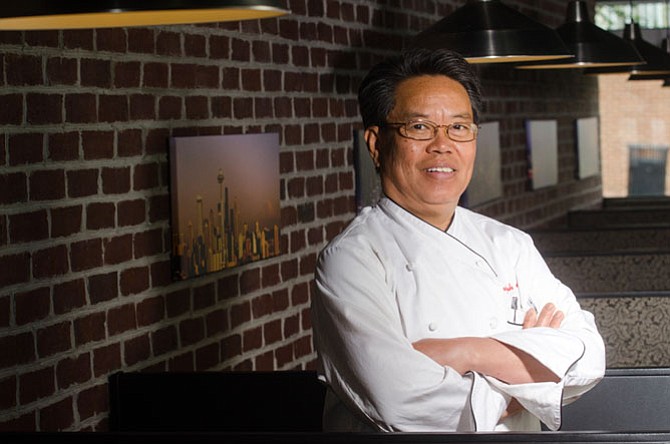 When two talented and energetic friends plan a venture, success is the likely outcome. Such is the case with these two chefs, Joseph Nguyen and Jaime Velazques who, about 10 months ago, opened a classy yet casual eatery in Fairfax called 21 Great American Bistro. What makes this restaurant stand out can be summed in just several words: fabulous food.

One of the offerings that has gained prominence—and it is great American bistro food—is the chefs’ hamburger, formed from natural Black Angus beef, comes as a stack with lettuce, tomato, onion, bacon, and mushrooms, all stacked on an olive oil bun. “We like to watch how people eat this,” said Nguyen. That’s easy for them to do, because the duo have a large kitchen window that looks right onto the dining room.

So how did all this come about. Both men have spent their entire careers working in high-end restaurants for superstar chefs. “I have been in the industry for 24 years,” said Nguyen. “I worked with Jean Louis Paladin at the Watergate and graduated from the American Culinary Federation (ACF),” where he worked for seven years in the kitchen and three years as the pastry chef. “I trained under Jean Louis and the Watergate Hotel program paid for my education,” he said. Nguyen then moved on to work in the kitchens of many different hotels in Washington and in Atlantic City, particularly in a casino hotel that had 14 restaurant outlets.

OWNING his own restaurant had always been his life’s goal. Fortunately, he met Velazquez about 12 years ago. Back then, they both discussed having their own business someday. Then two years ago, Nguyen called Velazquez, and they decided to take on this adventure.

As Velazques explained, the two came from very different backgrounds, and very different situations. “I worked at Le Provencal (a now-closed D.C. restaurant) under Jacques Blanc,” he said. “I then went to Old Town Alexandria to work at Provence with Yannick Cam,” he said. “And I worked with Michel Richard at Citronelle. Michel Richard and Jean Louis Paladin were such good friends. And I attended the French culinary school in Bethesda, which is now L’Academie de Cuisine.”

With such august training, it is no wonder that these two chefs from such differing backgrounds and cultures became such good friends that they decided to become business partners as well. Nguyen had the task of devising a menu. To do that, he said, he studied the Fairfax marketplace to understand the competition. “I needed our concept to focus on fresh ingredients and high quality food,” he said. That way patrons could come to the restaurant to enjoy city food without going into D.C. That way people can have quality food in a casual setting.

AS IT HAS TURNED OUT, the chefs say that 65 percent of their customers are repeats and that the city of Fairfax has been very supportive, with town dignitaries and lawyers often showing up for meals from a menu that blends American, French, Latino, and Mediterranean dishes.

And surely all patrons walk out pleased. After all, Nguyen and Velazques work six days a week, 14 hours a day, and have only one other chef, José Benitez, who has worked under Nguyen for the last 20-plus years learning all aspects of the culinary world. “That is our kitchen staff,” said Nguyen. “I want all the food clean and consistent every day. After all, the best food comes from fresh ingredients, great creativity, and a touch of the arts of culinary.”

And why the name 21 Great American Bistro? Well, he said, there are loads of bistros around.”And since I play golf, I just picked the number ‘21’ out of the air.”

Preheat oven to 350 degrees. Grease a 6-inch cake pan, and set aside.

Meanwhile, prepare the simple syrup by combining the sugar and water, and bringing it to a boil until the mixture thickens slightly. Remove from the heat, and cool. Stir in the rum.

To make the Nutella Mousse, fold the Nutella carefully into the whipped cream until well combined.

To assemble the cake, split the cake in three layers, brush with flavored simple syrup and layer Nutella mousse on first layer and second layers. Leave the third layer plain, and refrigerate the cake overnight.

Before serving, bring the cake to room temperature. To make the glaze, boil the heavy cream, and stir in the semi-sweet dark chocolate. Let cool, and drizzle the ganache glaze over top.