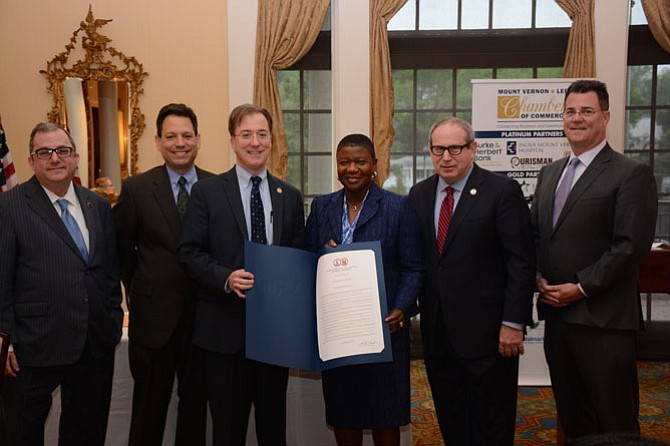 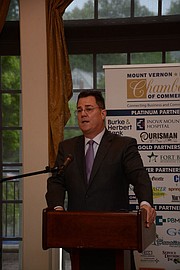 Del. Dave Albo (R-42) believes the hero in diversifying the economy of Fairfax County going forward could be Fairfax and the new Inova translational medicine center scheduled to open on the former Exxon property off Gallows Road.

State Sen. Scott Surovell (D-36) explains how the new proffer law will require projects funded through proffers be related to developments in the same area as the funding source.

Del. Dave Albo (R-42) introduced himself as a rare breed, an elected official in Virginia who happens to also be a Republican.

Albo and four other Virginia senators and delegates agreed on at least one topic during the Mount Vernon-Lee Chamber of Commerce May Business Breakfast, held May 12 at the Belle Haven Country Club: the need to diversify Virginia’s and Fairfax County’s economic base.

Albo referenced pre-recession northern Virginia as a leader in internet and telecommunications, among other industries.

In looking to diversify the new economy, Albo said he thinks “the hero in this could be Fairfax,” with a brand new translational medicine facility scheduled to open on the old Exxon property off Gallows Road.

Albo said Virginia is investing $35 million in the project, and that will require matching.

WITH A NEW HUB of medicine and technology in place, he said, the regional economy can get “back where we were, as a leader.”

Albo had a differing viewpoint from Governor McAuliffe’s blanket restoration of 260,000 convicts’ voting rights by signing a single sheet of paper. Albo said he planned to file a suit calling for more restraint and analysis of cases one by one.

Also, the 42nd District delegate addressed the ongoing debate of voting to expand Medicaid. With the federal government footing 90 percent of the bill, it would offer an Obamacare standard to cover low-income or poor individuals aged 19 through 64.

“How come streets aren’t paved, class sizes aren’t smaller,” Albo recalled from correspondence with constituents. “If we expand Medicaid, none of those things is going to happen. Yes, it’s a wonderful thing to do, no, we can’t afford it.”

State Sen. Scott Surovell (D-36) is among the Democrats who have spoken out strongly in favor of expanding Medicaid, however the Chamber’s question-and-answer format for the breakfast didn’t facilitate a debate on the subject.

Surovell instead spoke about the new proffer law, which he said keeps new projects closer to their funding source. He also briefly explained his hope to expand the Metro Blue Line that has yet to be endorsed by the Fairfax County Board of Supervisors.

Surovell answered another question about changing the Local Composite Index, the tool that helps decide how much money goes back to schools each year.

Though he said the “aging formula has its inequities,” he said it would be nearly impossible to change it, due to the way it supports other smaller jurisdictions in the Commonwealth.

Del. Mark Sickles (D-43) reminded the audience that in this year’s budget the Assembly passed, there is $16.8 million more than expected going back to schools who are “struggling for every dollar.”

One application of the waivers is supporting individuals who were once residents of the Northern Virginia Training Center off Braddock Road in Fairfax.

FOLLOWING THE RESOLUTION of a lawsuit against the Commonwealth of Virginia, the state was forced to close the majority of its regional training centers in favor of placing people into small group homes in the community.

All staff and residents have vacated the Northern Virginia Training Center as of March 2016.

“It has proven to work,” Sickles said regarding group home services. “We’re staying on the path to do that.”