The Few. The Proud.
Votes

The Few. The Proud. 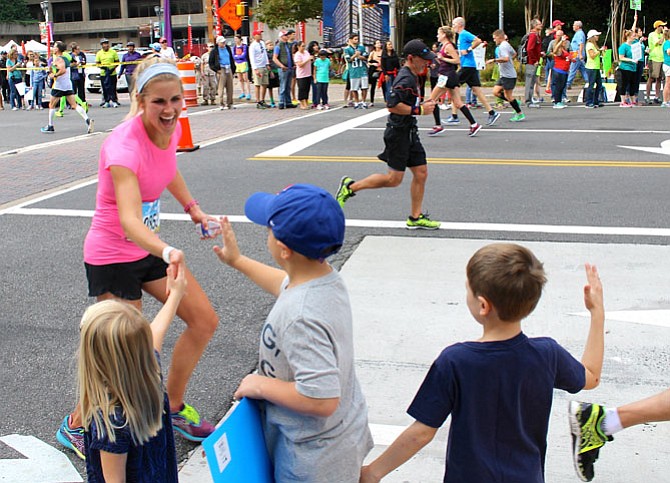 Cara Donley gets high-fives from her niece and nephews as she runs through Crystal City during the Marine Corps Marathon Oct. 30. Donley, 26, completed the 26.2-mile course in 3:26:16, placing 70th among all female runners. Photo by Kristin Donley 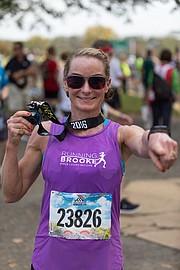 Brooke Curran shows off her medal after finishing the Marine Corps Marathon Oct. 30 in Arlington. The race was the 100th charity marathon for Curran, founder of the RunningBrooke Fund, and was completed in 3:51:05.

Cara Donley gets high-fives from her niece and nephews as she runs through Crystal City during the Marine Corps Marathon Oct. 30. Donley, 26, completed the 26.2-mile course in 3:26:16, placing 70th among all female runners.

Colleen Donley poses for a photo with nephew Jackson Dundon, 9, niece Jillian Dundon, 4, and nephew Mason Dundon, 7, during the Marine Corps Marathon.  The first-time marathoner ran the course in 4:16:06.

Al Richmond, center, is congratulated  by Quantico base commander Col. Joseph M. Murray after completing his 41st consecutive Marine Corps Marathon Oct. 30 in Arlington. The 77-year-old Maywood resident is the only individual to complete every MCM since its inception in 1976. He completed the course in 6:39:47.

U.S. Army Spc. Samuel Kosgei breaks the tape to win his second MCM with an overall time of 2:23:53. Kosgei won the 2014 MCM and became the sixth MCM finisher to be a two-time champion. 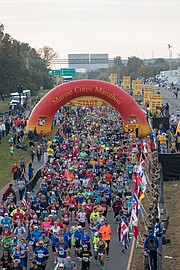 More than 1,000 Alexandrians joined 30,000 runners from 55 countries to participate in the 41st Marine Corps Marathon and 10K race Oct. 30 in Arlington. 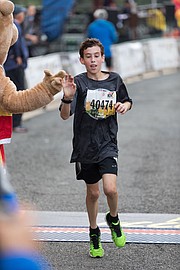 Eleven-year-old Caleb Hymans of Annandale finished fourth overall in the men’s division of the MCM10K with a time of 38:54.

“The Marine Corps Marathon is the one to run. This is a really cool marathon” — Cara Donley, who finished the race in 3:26:16.

“I actually bested my old PR by two seconds,” said Donley of setting a new personal marathon record of 3 hours, 26 minutes and 16 seconds. “This was only my third marathon and it was quite warm — not ideal for runners. But I stayed hydrated and was happy with the results.”

Donley’s time placed her 70th among female finishers and in the top 500 of the more than 30,000 runners that took to the starting line. A relative newcomer to marathons, Donley, 26, credited her success in less than optimal conditions to her training with the Pacers running team.

“I joined the Pacers running team to train this last year,” said Donley, who also coaches crew at T.C. Williams High School. “Even though we run at vastly different paces, the training together and being held accountable every week really helped me.”

Donley and her sister Colleen, who ran the course in 4:16:06, were cheered on by numerous family members throughout the race, including her father, former mayor Kerry Donley.

“Everyone split up into different spots,” Donley said with a laugh.  “It was neat seeing someone every couple of miles to cheer me on. Divide and conquer — that’s the Donley way.”

Donley and Curran were among more than 1,000 Alexandrians who took part in the marathon and 10K races.

Taking top honors was Army Spc. Samuel Kosgei, 32, from Junction City, Kansas, who won his second MCM with an overall time of 2:23:53. Kosgei won the 2014 race and is the sixth MCM finisher to be a two-time champion.

Next up for Curran is the Richmond Marathon on Nov. 12. Donley qualified for the Boston Marathon and will run that race next spring.

“I’m excited to run Boston but I tell everyone that the Marine Corps Marathon is the one to run,” Donley said. “To be running alongside our military, veterans and amputees and to have Marines cheering everyone on the entire way is an incredible feeling. This is a really cool marathon.”