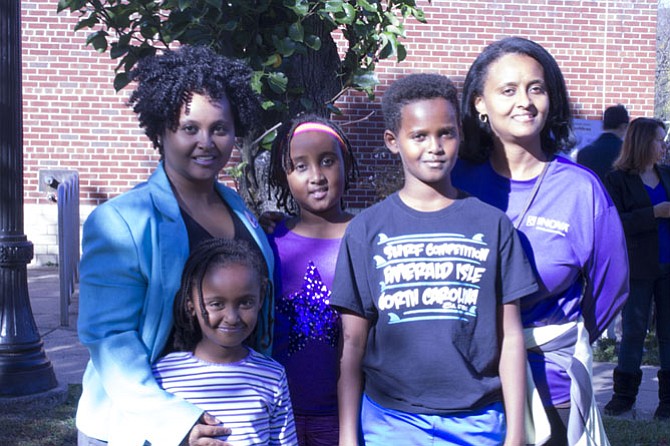 Family Affair: Mother Fegegta Workie (far right) brings her children, (right to left) Abaineh Haile, Naomi Haile and Helina Haile to the poll with her to watch her cast her vote for the first female presidential nominee of the Democratic Party. They ran into their “auntie,” Essey Workie, who was also voting (far left). Photo by Fallon Forbush.

Fegegta Workie, Democrat, Hillary Clinton “I think she has a lot of experience and she thinks through things and Donald does not. He is way too divisive. He cares only about himself. Hillary will unify the country.”

Anita Srivastaka, Democrat, Hillary Clinton “First of all, she’s a woman. Second, I agree with all of her ideas and policies. She’s a strong woman who has a lot of experience, unlike Trump. He has more qualities of a dictator.”

Lou Toohey, Republican, Donald Trump “I was a lifelong Democrat, but I switched to Republican because he stands for us and she stands for herself and her own special interests. She thinks she deserves to be in the White House because she’s a Clinton.”

Roman Voytko Barrosse, Independent Voter, Hillary Clinton “I think that she’s the most qualified candidate. She has the temperament to lead a country. Despite scandals that may have broken, she has the most experience. She knows how to lead. She’s the least crazy. ”

Bill Matz, Republican, Donald Trump “I think he’s the type of leadership we need right now. Even though he’s a little bombastic, he’s not an untrustworthy person. It’s who we need right now. I like his immigration policies and the fact that he is a proponent of our Constitution. He’s anti-establishment and not a politician.”

John Donahue, Democrat, Hillary Clinton “Oh geez, she’s the best candidate. She is very smart and I was glad to see a woman on the ballot. That should have happened years ago. I don’t want to have anything to do with that awful man [Donald Trump].”

The library was the polling location for the Hickory precinct in Great Falls where approximately 400 absentee ballots were cast before voting began, according to Candace Bovee, the poll’s election chief.

There are a total of 3,461 voters registered in the precinct, so the county’s Office of Elections expected nearly 3,000 voters to pass through its doors by the time it closed at 7 p.m.

“I think it’s a little busier today,” says Bovee. “We’ve gone through a lot of ballots and we’ve been pretty steady.”

She has volunteered as the election chief for the polling location for the last three elections and has been an election officer three times before that.

The county had 243 poll locations open to accommodate the 682,990 residents who were registered to vote in time for the election.