Hotly-contested seat targeted as a “flip” for Democrats. 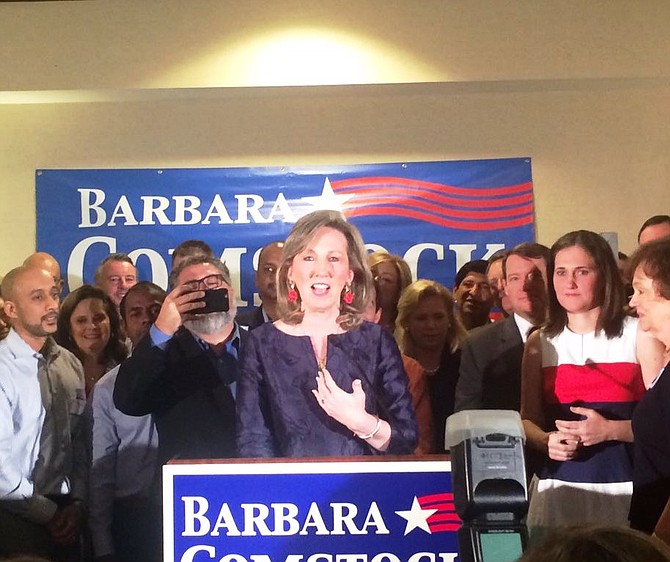 From the outset, the race for Virginia’s 10th Congressional seat attracted national attention as a possible “flip” for Democrats in their bid to gain the 30 seats they needed to win back control of the House. Democrats poured money into the race, which many pollsters considered a bellwether race in a battleground state.

Bolstered by the Presidential election, voter turnout greatly exceeded the roughly 223,000 votes cast when Comstock won the seat in the 2014 midterm elections.

“This win is your win,” Comstock declared at a victory party in Ashburn to a crowd of about 200 supporters.

Ed Gillespie, a longtime Comstock supporter favored to win the GOP nomination for Virginia Governor in 2017, said Comstock won the race because no one could “outwork or outsmart” her. Comstock is known as an unflagging campaigner, who typically attends or hosts a dozen district events and meetings each week.

Fairfax County Supervisor Pat Herrity (R-Springfield), another longtime Comstock supporter who attended Tuesday’s victory party, said Comstock is committed to her constituents in a hands-on way. “They know her, and they know they can count on her,” Herrity said. “She shows up. She even attended my town hall forums on heroin abuse because she knows it matters to her constituents.”

But Democrats also knew that voters in the 10th Congressional District were, by and large, affluent, well-educated and likely to reject Trump. They were counting on polls that showed educated suburban women voting against Trump and, by association, any down-ballot Republicans. In 2008 the district went blue for President Barack Obama, and – four years later – Republican candidate Mitt Romney narrowly carried the 10th.

Although Clinton defeated Trump by more than eight percentage points on Election Day in Virginia, Bennett was not able to ride her coattails to victory, indicating that many in the district split their votes between the major parties — voting for Clinton for President but for the Republican Comstock for Congress.

“I commend LuAnn Bennett and her team for a truly hard-fought race in Virginia’s 10th Congressional District,” said Susan Swecker, the chairman of the Democratic Party of Virginia (DPVA), in a statement after the race was called for Comstock.

“LuAnn brought everything to the table: a penchant for public service, a strong business record, and pragmatic solutions to the problems that face Northern Virginia. I am confident that her role as a community leader won’t stop here, and I know she will continue to fight for working families in whatever she pursues next."

Bennett told supporters in Falls Church that, although the results of the election were “not what we hoped,” she was “so proud of the campaign we’ve run, and vision we’ve put forward for … our country.”