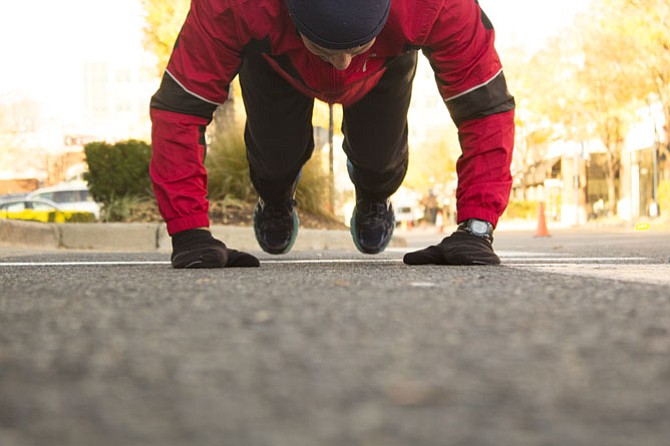 Christopher Scalia, 40, of Fairfax stretches before the race. He ran for his brother who serves in the Army and finished in 20 minutes and 46 seconds. Photo by Fallon Forbush.

Reston — More than 600 people from all over the greater Washington area braved 30-degree weather on Sunday morning to salute veterans and members of the military by running in Dominion Consulting’s Third Annual Veterans Day 5K.

The Reston organization partnered with Potomac River Running to host the race at the Fairfax Corner shopping center.

Keith Freeburn, 42, of Centreville was the first male to finish the 3.1-mile race in 17 minutes and 50 seconds, while Eryn Caton, 34, of Falls Church crossed the finish line in 19 minutes and 12 seconds, according to Commonwealth Race Management.

A smaller crowd also ran or walked in the event’s 1K Fun Run.

Julian Jackson, 6, of Fairfax was the first to finish. He, his mother Maia McCuiston and his brother Daniel Jackson, 9, ran in memory of his grandfather, Frederick McCuiston, Jr., who was a veteran of the Air Force.

“Just by getting vets out who have issues [post-traumatic stress disorder] gets them involved and gives them two hours or so to not think about those things,” says Lynch, who is a veteran of the Air Force.

“We have a few causes that we support, one being veterans,” says Scott Gold, a senior manager for Dominion Consulting, Inc.

His organization regularly supports the Fisher House Foundation, a network of homes where military and veterans’ families can stay at no cost while a loved one is receiving medical treatment, and Our Military Kids, Inc., a nonprofit organization that provides grants to children of service members. The children of parents who were wounded or killed while serving in any branch of the military and children who have parents who are deployed National Guardsman or reservists in the Army Reserve are eligible for the grants, which fund activities that help kids cope with the associated stress and anxiety.

Sunday’s race was all about helping a third organization that also provides distraction therapy. Donations from participants and proceeds from registration fees will benefit Team Red, White & Blue.

Team RWB’s official mission is to enrich the lives of America’s veterans by connecting them to their community through physical and social activity. This is because the national organization’s founders noticed that service members tended to stick to themselves when they returned from deployment, according to Michael Lynch, running coordinator for Team RWB’s D.C. chapter.

Members of Team RWB’s D.C. chapter regularly rock climb, volunteer and plan activities that get its military and civilian members to mingle and be physically active.

“Just by getting vets out who have issues [post-traumatic stress disorder] gets them involved and gives them two hours or so to not think about those things,” says Lynch, who is a veteran of the Air Force.

More than 50 of Team RWB’s D.C. members ran in the race, while more than 30 volunteered to help make the event happen.

“I personally prefer helping small organizations because they need all the help they can get,” says Gold, who worked at a small nonprofit organization in Atlanta, Georgia, before he started working for his technology and management consulting firm. “You really know that you’re really helping.”