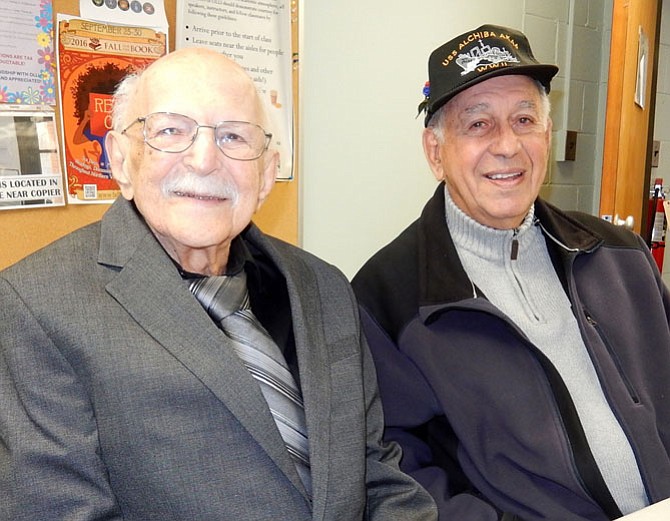 The Fairfax County Police Honor Guard began the event with the presentation of the colors, and then Laura Redman sang the National Anthem. Then retired Army Col. Mike McNamara read a poem he wrote about his time in Vietnam’s Mekong Delta. It ended with the words, “58,000 of our own fell in that country, and it is their service – and that of so many others – we commemorate this day.”

After McNamara’s poem, each branch of the military’s song was played, and the veterans stood when they heard their branch’s anthem. Then the 75 or so OLLI members and their families watched “Arlington: Field of Honor,” a National Geographic documentary about the history of Arlington National Cemetery and the elite Army guards who constantly watch over The Tomb of the Unknowns.

THE MOVIE stated that, “For an American, there is no more honorable place to be buried and no more sobering place to visit. It’s a place where people come to grieve and say goodbye, but also a place where stunning feats of valor are recorded. Americans from every war are buried here. Each and every one of these [grave] stones tells a story about somebody who had an impact on American history.”

Among those at Friday’s event were WWII veterans Chester Myslicki and Adrian Pelzner. Myslicki, 96, was a sergeant in the Air Force Signal Corps; and Pelzner, 90, was a motor machinist in the Navy.

Drafted in 1944, Pelzner was trained as a diesel mechanic and assigned to the USS Alchiba supply ship. “We took supplies from the U.S. to the Mariana, Marshall and Caroline Islands and to the Philippines,” he said. “We brought an unbelievable variety of materials – Quonset hut sections, diesel engines, medical supplies, wood and sheet metal so the airplanes could land and take off. There were different materials at different stages of the war – sometimes food, tents or ammunition.”

Pelzner worked in the engine room and kept the ship going. “The hardest part was working in 100-degree temperatures there,” he said. “At the end of the war, we were off the coast, awaiting orders to invade Japan, But then the atomic bomb was dropped, and we knew the war was going to be over when that happened. We were very happy that we were going to go home.”

He said the USS Alchiba is the only supply ship in the history of the U.S. Navy to receive a Presidential Unit Citation. “Before I was on it, it was torpedoed by the Japanese in November 1942 in Guadalcanal,” explained Pelzner. “But instead of letting the ship sink, the crew drove it into the beach and saved all the supplies on it needed for the Army Air Corps’ further raids on Japan.”

AS FOR MYSLICKI, he enlisted in the Air Force at age 23, after the war began. “I wanted to be in radar,” he said. “I thought it would be interesting, as well as relatively safe, and I trained others, as well. We, too, were supposed to land on Okinawa and direct the planes landing there and hitting Japan. But the war ended before we could do that, so we were happy.”

Myslicki liked his job because, he said, “It required a certain amount of skill. We told the U.S. warplanes what to do in the attacks and where to aim their bombs.” He said the toughest part was learning all the signals, but he was proud that he belonged to “the largest signal unit ever created.”

Pleased to be part of OLLI’s Veterans Day celebration, he said it “reminds people of what has been accomplished by the veterans.”

Agreeing, Pelzner said, “It’s important because they’re honoring veterans. Veterans Day means a tremendous amount of people gave their lives and took time out of their lives to serve their country.”

The Osher Lifelong Learning Institute (OLLI) at George Mason University is at 4210 Roberts Road in Fairfax. It offers intellectual, social and cultural experiences in a welcoming atmosphere to Northern Virginia residents in their retirement years. OLLI’s more than 1,200 members enjoy access to unlimited courses with no homework, no exams, no required college degree and no age threshold. Classes and social events are offered at various locations. For a free catalog and more information, go to http://olli.gmu.edu/ or call (703) 503-3384.