‘War is dirty business, but we better be prepared.’ 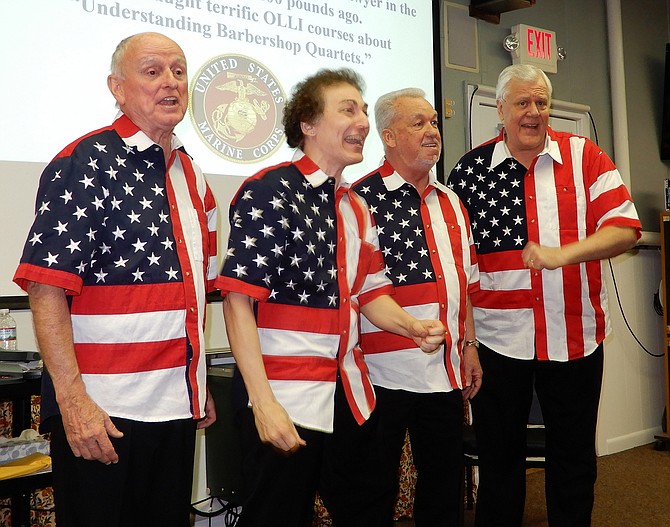 The Osher Lifelong Learning Institute (OLLI) in Fairfax has a special place in its heart for America’s veterans. And last Friday, Nov. 9, it honored them for the fourth year in a row with a special ceremony acknowledging their service to their country.

Following the presentation of the colors by the Fairfax County Police Color Guard and the singing of the national anthem, Army Col. (ret.) Mike McNamara read an original poem he wrote for the occasion. Then songs representing each branch of the service were played, with veterans standing for their particular anthem.

“We are here today to commemorate the 100th anniversary of the armistice ending WWI,” said OLLI’S Jim Dunphy. “On Sunday, Nov. 11, at 11 a.m., Americans across the nation will toll bells in remembrance of those who served and sacrificed.”

Among those at Friday’s event were WWII veterans Chester Myslicki and Adrian Pelzner. Myslicki, 98, was a sergeant in the Air Force Signal Corps; and Pelzner, 92, was a motor machinist in the Navy. And they and the others enjoyed patriotic songs performed by Sympatico, a barbershop quartet that’s part of the Fairfax Jubil-Aires.

Attendees also watched the documentary film, “The Hello Girls,” which premiered in March at the Women in Military Service for America Memorial. Narrated mainly by their granddaughters, it told the story of the 223 uniformed women in the U.S. Army Signal Corps who went to France in WWI to serve as switchboard operators.

THEIR EFFORTS allowed Army personnel to make calls and connect to their party in just 10 seconds. By the end of the war, they’d connected more than 26 million calls. But when they came home, they were told, “You were never soldiers,” and it took 60 years for them to get their proper recognition.

Ultimately, the law turned out to be that, because the Army gave them uniforms and told the women to wear them, they were considered soldiers. In November 1977, they were finally recognized as being in the Army, and President Jimmy Carter signed legislation to that effect. Sadly, though, two of them died overseas, serving their country, and most of the others never received their full, military honors until after their deaths.

Prior to OLLI’s Veterans Day program, McNamara spoke with The Connection about his life in the military. By his side was his wife of 62 years, Julie. He served 30 years in the Army, beginning in 1959. “I was in the ROTC at Rutgers; and since we were getting married, I wanted to enter as an officer, rather than an enlisted man,” he said.

McNamara was an infantry officer, a ranger and a parachutist; he commanded a battalion in Texas, served 15 months in Korea and spent two tours in Vietnam. He was also a member of the Old Guard at Fort Meyer and Fort McNair. When Pres. John F. Kennedy died, Nov. 22, 1963, he was one of six officers in charge of funerals.

“I was in charge of all the ceremonies taking place for him at St. Matthew’s Cathedral,” said McNamara. “We’d rehearsed state funerals for other past presidents and five-star generals, but not for Kennedy, because he was so young. So we had to create one for him, from scratch.”

McNamara was a captain then and had to brief all the joint chiefs of staffs on the plans. “I didn’t sleep for three days,” he said. “Everybody in the Old Guard loved Kennedy and held him in high regard – not just as a president, but as a man. The night before the ceremonies, I had to re-brief Cardinal Cushing. Originally, the family was going to limit the funeral to immediate family and friends, but people wanted to attend from all over the world, so it grew larger.”

One of the most iconic photos from Kennedy’s funeral shows his 3-year-old son, John John, saluting as his father’s casket left the cathedral, en route to Arlington National Cemetery. “I was 10 feet away from him,” said McNamara. “We were all saluting, so he did, too.”

Another career highlight was when McNamara was a senior advisor to a Vietnamese ranger battalion. He later taught ROTC at the University of Hawaii while working on his Master’s in English Literature.

McNamara then returned to the Vietnamese Delta in 1968-69. “I was executive officer of an American Riverine Battalion, which was part of the 9th Infantry Division,” he said. “We were transported by Navy ships to do strike operations in the Mekong Delta, just south of Saigon.”

So, he continued, “I got to experience the war from both sides. But the hardest part was being away from my family – including a son and daughter in grade school – at a time when the war wasn’t too well-thought-of.”

Afterward, McNamara attended Command and Staff College at Fort Leavenworth, Kan., and finished his Master’s at the University of Kansas. He then flew Boeing 707s with the U.S. Air Force in England and was the officer in charge of sending emergency-action messages.

Next, he commanded a battalion at Fort Hood in Texas, under Gen. George Patton’s son, who made McNamara the division’s inspector general. He then attended the Royal College of Defense Studies in London before going to NATO as a staff officer doing logistics and briefing people.

McNamara was then slated to be an Army attache' in London. “But our son had leukemia, so we came back to the U.S. to be with him until he was better, about a year later,” he said. “Then around 1987, I went to work in the Pentagon in the Secretary of Defense’s office, preparing briefing papers for any U.S. negotiations with the British and, later, with Turkey.”

RETIRING IN 1989, he began working for his former boss to try to get continued military aid and equipment for the Turks. After that, he kept tabs on Bosnian equipment and training by the Americans and other governments.

“Then I did the same thing, trying to get money from Congress in support of equipping and training the Afghans,” said McNamara. “But when they asked me to go to Iraq and do it there, too, my wife said she’d shoot me. So I retired and taught Shakespeare, military issues and international poetry at OLLI.”

And each year, he writes and reads an original poem for OLLI’s Veterans Day ceremony, which he called “a means of recognizing good service.” But quoting Plato, he added, “‘Only the dead have seen the last of war.’ War is dirty business, but we always better be prepared.”