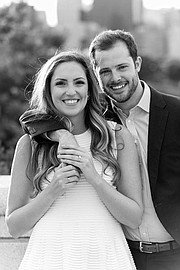 The bride wore a Hayley Paige gown made of floral lace and a full-length tulle ball gown with a chapel train.

The groom’s parents hosted a Rehearsal Dinner at ZED451 Restaurant in Chicago on the eve of the wedding. The weekend included a Welcome Reception hosted by the bride and groom at the Windsor Hotel, a private suite at Wrigley Field for a Chicago Cubs game and a “Chicago-style” Pizza Farewell Luncheon the day after the wedding hosted by parents of the bride and groom.

After a honeymoon in Singapore, Thailand and Bali, the couple plan to reside in Minneapolis, Minn. Parents of the groom are Captain (Ret.) Carl E. “Trey” Carson III and Anita Carson of Alexandria.