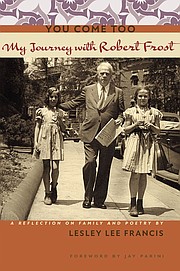 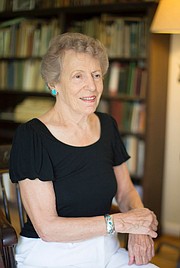 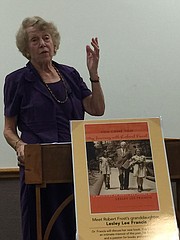 Dr. Lesley Lee Francis, granddaughter of Robert Frost, lecturing to members of the Osher Lifelong Learning Institute at the Fairfax Lord of Life Lutheran Church Oct. 12; poster shows cover of her new book, ‘You Come Too: My Journey with Robert Frost.’

The granddaughter of Robert Frost, probably the favorite American poet of the twentieth century, believes that most biographies ignore an important part of his life, and in her new book, “You Come Too: My Journey with Robert Frost,” Dr. Lesley Lee Francis tries to fill this gap with information about the enormous influence several women had on his work and success.

SPEAKING WEDNESDAY at the Fairfax Lord of Life Lutheran Church to members of the Osher Lifelong Learning Institute (OLLI) at George Mason University, Dr. Francis told of the first big female influence in Frost’s life: his mother, Scottish immigrant mystic and imaginative storyteller Isabelle (Belle) Moodie Frost. Frost always hated school (though ironically, he loved to teach) even though his mother was a professional teacher, so she home-schooled him when they lived in San Francisco. What he picked up from Belle, according to Dr. Francis, was vitally important.

Another important woman in Frost’s life was Susan Hayes Ward, literary editor of the New York Independent newspaper. She featured his poem, “My Butterfly: An Elegy,” on the front page of the paper in 1894. This was the first time any poem of Frost’s was published outside of school, and confirmed in his mind that he was going to be a poet. Ward published other poems of his, and became close with his family. Just before her death, she scolded Frost about his famous poem, “A Swinger of Birches,” because it was about a boy. She thought Birches was a wonderful work, but felt he needed to write a similar poem about a girl. He obliged with a poem called “Wild Grapes.”

Another important influence was his wife, Elinor, who Dr. Francis describes in her book: “…Elinor focused her attention on the goal she and her husband had set for themselves, to enjoy a life of poetry together. Elinor had become her husband’s number one partner, not as a helpmeet for genius but as a perceptive ear for the beautiful music of his poetry. He shared with her each poem as it was written; in a practical sense, as he stated, ‘she had a perfect ear for vowel sounds.’”

Dr. Francis herself has had a distinguished academic career, graduating from Radcliffe with an AB degree and from Duke with a PhD in Romance Languages. She became a professor of Spanish language, literature and history at a number of colleges and universities. She has lectured and published extensively on her grandfather; her biographical study, “Robert Frost: An Adventure in Poetry, 1900 – 1918,” is available in paperback.

When asked what Frost was like as a grandfather, Francis merely said: “That’s a hard question to answer… He was still working when he died at 88. He had a lot of responsibility…He had to support four children, and three of them had physical and mental problems (his wife Elinor died in 1938)…You couldn’t go and just sit on his knee in a nice living room somewhere with a rocking chair.”

OLLI MASON, which sponsored Dr. Francis’s talk, provides first-rate educational, social, and cultural opportunities for active seniors in Northern Virginia. More information about OLLI Mason and its events can be found at olli.gmu.edu