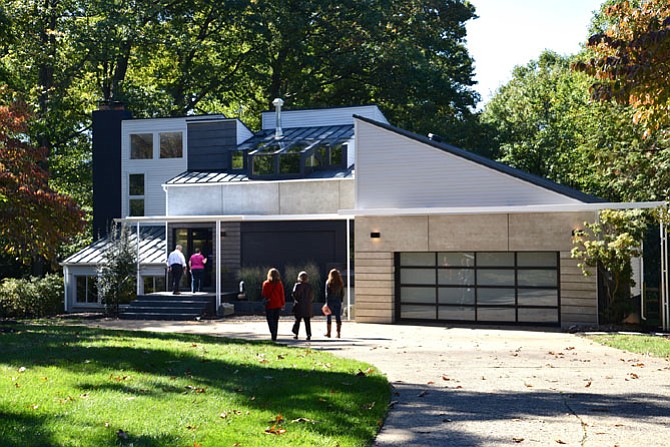 The still-in-progress, renovated-from-top-to-bottom Coleman house on Putter Lane. The theme of the 2016 Reston Home Tour was “Embracing Change.” The Colemans have certainly done that. Photo by Andrea Worker. 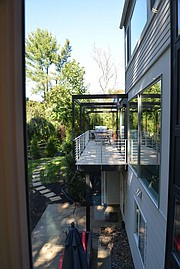 Part of the transformation of the Coleman house included two decks from which to enjoy the view and watch the goldfish doing their thing in the pond.

Carol Kristen didn’t mind the volunteer duty, since she is also good friends with the homeowners Steve Kisner and John Lojpersberger of this well-appointed condo in the Oak Park complex, and could cheerfully speak about the kitchen renovations and what the owners have done to maximize the space and put their many treasures on display.

The steps didn’t keep Liz Bleich and Marilyn Jarvill, both from Reston, from checking out the top floor master suite in the five-story townhouse on Beacon Heights. Luckily for the owners, there is an elevator that services all five floors, but visitors on the tour understandably were directed to the stairs. Bleich has lived in Reston for over thirty years and has attended the tour a few times, while “newbie” Jarvill with “only” fourteen years residency, was making her first appearance at the well attended event.

A mild, sunny autumn day made wandering from one end of Reston to the other a decided pleasure, both for the ticket holders for the annual Reston Home Tour, and for the homeowners who generously put their digs on display. “Really,” said one gentleman volunteer at the stop at the five-story Beacon Heights Derrick/Lashlee townhouse along Lake Audubon. “I don’t even want to imagine hundreds of soggy visitors marching through this gorgeous house.”

Thankfully, the weather cooperated brilliantly and everyone was able to enjoy the self-guided tours of six diverse private homes, and a roam through BLVD, Reston’s newest luxury apartments, towering over the Wiehle-Reston Metro Station.

THIS YEAR’S THEME was “Embracing Change.” In the message that introduced the tour’s program, Chair Bonnie Haukness wrote, “Vibrant communities like Reston are constantly changing. Some of the new is met with apprehension, some enthusiastically welcomed. This year’s owners have all embraced change in their lives and in their homes…we are very happy to share their new spaces and stories with you.”

Haukness wasn’t kidding about the change that some of these properties have undergone, some over the years and some as recently as “still in progress.” Probably the dwelling that has seen the most significant transformation is the home of Kendall and Tiffany Coleman on Putter Lane. It’s a good thing that the project manager, Rich Coyle of Coyle Construction was on hand during the tour, and that there was a looping slide show that detailed the befores and afters of the complete renovation of this property, built in 1968. It might have been difficult otherwise to believe just how many changes were made to update this property, give it more open space, more storage and lots more natural light and some fabulous decks from which to enjoy the signature Reston greenery and the owners’ fish pond.

Malcolm and Kim Gilbreath’s home on Night Star Court shows you what can be done when you put your own heart and soul into your environment. Without benefit of an architect or a designer, they transformed their home, one major step at a time. They started in 2005 by taking the basement down to its concrete foundations, even removing interior walls, to rework the entire space. Digging down to add four full-size windows to the in-ground lower level, they now have a brighter and more functional space with a media area, wet bar, fifth bedroom, full bath, a laundry room, and a den. Their 2015 kitchen renovation, again calling for the removal of walls and turning the back wall into windows with a view of their tranquil backyard, was featured on the website HOUZZ, as well as Luxury Home and Design magazine. It also elicited quite a few sighs and longing looks from many of the tour visitors.

More renovations and additions, both inside and out, were on display at the Richards home off of North Village Rd., the Millar home off of Great Owl Drive, and the Kisner/Lojpersberger condo in the Oak Park complex, where how to downsize and still maintain the space for showcasing your art and collectibles and entertaining your friends and family were well demonstrated. The condo owners, Steve and John, just renovated the kitchen. It may not be the biggest, but it has all of the modern conveniences and an enviable functionality.

ONE OF THE MOST CROWDED STOPS on the tour was the new BLVD apartments at Metro Station, as the curious from Reston and beyond decided to see what the “new stuff” was all about. The ultra-sleek common areas may not be everyone’s cup of tea, but there was agreement that those multiple spaces provided lots of places to gather or hold private parties and events, hang out and people watch, shape up in the state-of-the-art fitness center or the yoga studio, just chill or maybe barbeque in one of the several outdoor areas, or just spend time taking in the incredible 360 degree views from the 21st floor. After checking out the penthouse panorama, visitors were then invited to view three different models, from a studio with a bedroom alcove, to a two-bedroom apartment with gourmet kitchen.

The $30 ticket price for the tour benefits the Reston Historic Trust, which also received 10 percent of tour day purchases made at the Wine Cabinet at North Point Village. In keeping with the “Embracing Change” theme, Chair Bonnie Haukness is turning over the reins to new Tour Chairs after 10 years on the job. With the help of hundreds of volunteers, sponsors, and the homeowners, with the success of the 2016 event, Haukness is certainly ending her tenure on a good note.