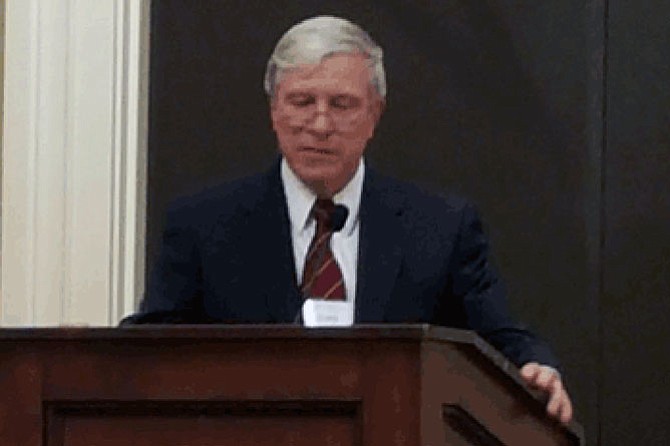 On Oct. 6, the Virginia Association of Community Service Boards (CSB), at its statewide conference in Charlottesville, presented Fairfax County’s Gary Ambrose, chairman of the Fairfax-Falls Church CSB's Board of Directors, with the 2016 Gartlan Award.

The VACSB award honors "heroes who give of their time and energy to steward long-reaching and timeless improvements in the public system and who share the leadership qualities exemplified by Senator Joseph Gartlan." Joseph V. Gartlan, Jr. (1925-2008), served in the Virginia Senate for 28 years, fighting for Virginians who depended on the public system of services for mental illness, intellectual disability, and substance use disorders, and who often had no political voice.

"I’m honored and proud to receive the Gartlan Award," says Gary Ambrose. By 2013, when Ambrose was first appointed to the CSB Board, he had already retired from two illustrious careers: first, as a B52 pilot and brigadier general in the United States Air Force with 27 years of service, and then, 11 years as IBM's Vice President for the Department of Defense.

In retirement, he and his wife, Marcia, became active members of NAMI – the National Alliance for Mental Illness of Northern Virginia – and the local advocacy group, Concerned Fairfax.

"Like many other people, my wife, Marcia, and I became advocates by necessity," Ambrose explains. "We were advocates for our son, who, for 17 years, lived with paranoid schizophrenia, until his illness took him from us in 2014."

After his son's death, Ambrose continued to lead efforts to improve treatment and conditions for mentally ill persons. He continued to serve on the CSB Board and was elected chairman in 2015.

That same year, Ambrose was appointed to the Fairfax County Ad Hoc Police Practices Review Commission. He championed a recommendation of the Commission's Mental Health and Crisis Intervention Subcommittee to launch an ambitious, multi-agency effort, later called "Diversion First," that provides alternatives to incarceration for people with mental illness, co-occurring substance use disorders or developmental disabilities who come into contact with law enforcement for low-level offenses.

With Ambrose as citizen leader, Diversion First is already having a positive effect in the community, as hundreds of people have already been diverted from potential arrest for low-level offenses to mental health treatment.

"Although we can no longer advocate for our son," Ambrose says, "we believe that our advocacy and experience can benefit other parents with family members living with mental illness."

"I hope," he adds, "that this award is an indicator that we are making a difference."