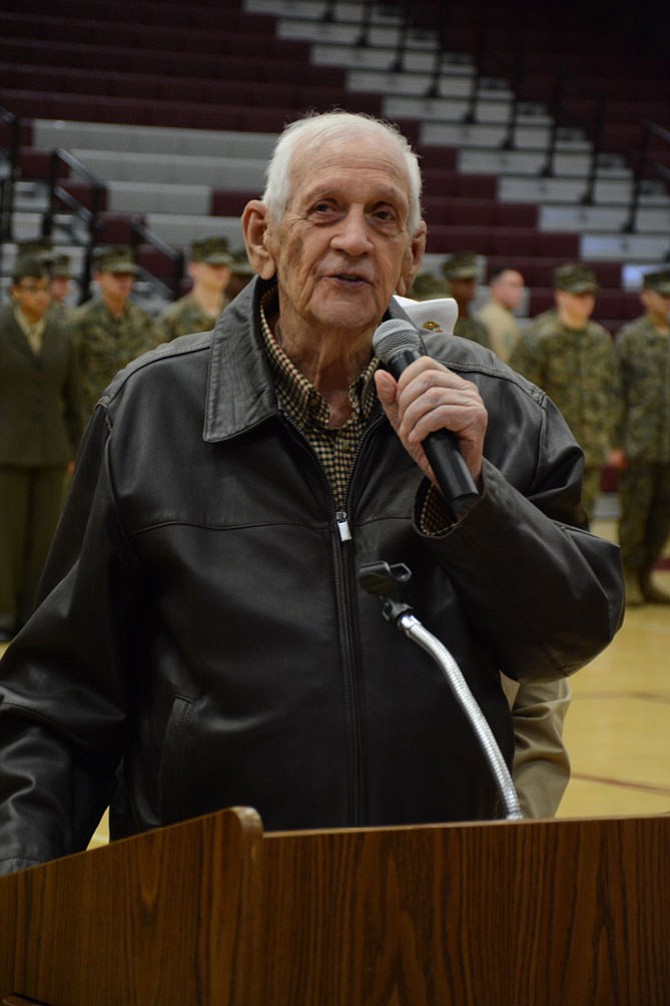 Michael Skinner, a history teacher, basketball coach and sub school principal at Mount Vernon High School between 1955 and 1983, recalls memories of serving in World War II before coming to the school. Photo by Tim Peterson.

Pat Hynes remembers Michael M. Skinner as an administrator was one of those people who “the kids all love, and sort of fear a little.”

Hynes, now representing the Hunter Mill District on the Fairfax County School Board, spent her senior year at Mount Vernon High School in the late 1970s while Skinner was assistant principal.

Skinner, a Shepherdstown, W.Va. native, died Oct. 17 at the age of 91. Between 1955 and 1983, he taught history, coached basketball and was served as subschool principal, all at Mount Vernon.

“As the AP,” Hynes said, “he had to do the enforcement thing sometimes. But he was always warm and kind, he cared deeply about every kid and had such a big heart for the work. Those relationships are the key to successful schools.”

King said Skinner was a tireless advocate for the high school in the Mount Vernon community and at the School Board. He was also a constant supporter of the school’s sports teams, she said, donating Most Valuable Player trophies for each team, every season for two decades, and establishing a golf tournament to raise money for the athletic department.

“He constantly donated things,” King said. “If a student was in need of something, Mr. Skinner would make sure that need was met. People know he was at our games, but he cared about individual students, students he didn’t know. All he had to do was hear their story and he found a way to help.”

Skinner’s wife of 47 years Lucy Peacock Skinner described her husband as one of the most generous and caring people she’s ever known. He was never too busy to help anyone, and sometimes he even helped when you didn’t ask for it.

Lucy Skinner said he was a wonderful husband, a great communicator and a friend forever, keeping in touch with those whom he cared about.

School Board representative for the Mount Vernon District Karen Corbett Sanders said in a statement that Skinner exemplified all that is good in Mount Vernon.

“As a coach and school administrator he was committed to helping each child achieve their potential,” Corbett Sanders said. “He was never prouder than seeing a MVHS student excel on the field, in the classroom and in the community. I have been honored to draw on Mr. Skinner's advice and consult as a community member and on the School Board.”

Skinner was also a World War II U.S. Navy veteran, serving aboard the U.S.S. Washington and manning at 16-inch gun. He graduated from Shepherd University and earned a Master’s degree from George Mason University.

Former School Board member from Mount Vernon and current Supervisor Dan Storck (D-Mount Vernon) remembers, “When it came to his beloved MVHS students, staff and community, Mike was a very hard man to say ‘no’ to.”

“His persistence was too strong and passion too deep,” Storck continued in a statement. “With the tens of thousands of lives he mentored and molded and a community he changed, he will never be forgotten or replaced. Every day at the end of morning announcements, Mr. Skinner would end them by saying ‘May the sun shine in the halls of MV High.’ Now looking over MVHS, Mr. Skinner can indeed ensure that the sun continues to shine over MV High.”

King said she had a conversation with Skinner in the last week and a half before he died. He asked how the football team was doing, how things were going at the school.

“To his dying breath,” King said, “he was concerned about the school. Lucy his wife, and Mount Vernon, those were the two things he loved.”

In lieu of flowers, contributions may be made to the Washington Farm United Methodist Church, 3921 Old Mill Road, Alexandria, VA, 22309; Shepherd University; or the Mt. Vernon High School Athletics Department.