The mayor, the governor, and the CEO of a brewing company walk into a bar … 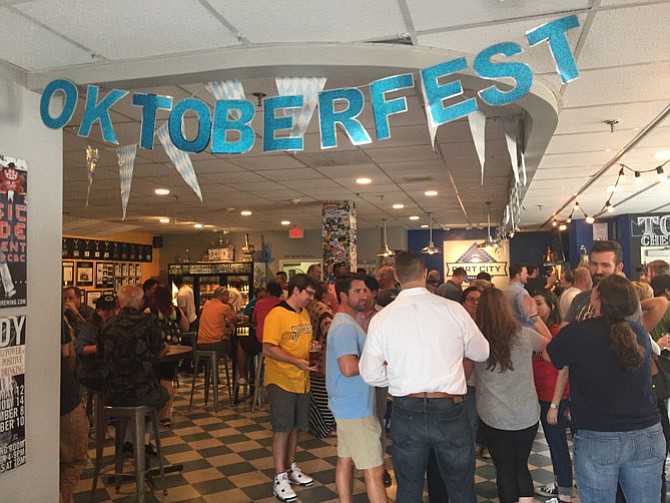 Gov. Terry McAuliffe (left) with a check to the City of Alexandria for $250,000 presented to Mayor Allison Silberberg (right). The money from the state and city both go through the Alexandria Economic Development Partnership to Port City Brewing Company. 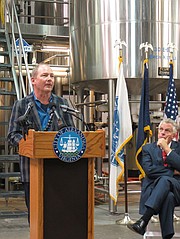 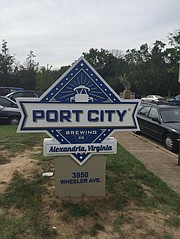 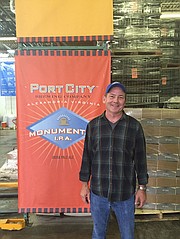 Port City Brewing Company, an Alexandria-based brewery, is making a major step to increase its manufacturing capacity with the help of state and city funds. On Aug. 31, Port City CEO Bill Butcher sat down with Mayor Allison Silberberg and Gov. Terry McAuliffe for a drink. The choice of beer was Port City’s Optimal Wit; the topic of conversation was a $500,000 check from the State of Virginia and the City of Alexandria to help fund the expansion of Alexandria’s Port City Brewing Company.

Half of the funding comes from the state’s Agriculture and Forestry Industries Development Fund, the other half is matching funds from the city required by the state grant. The company, in turn, will buy 75 percent of its agricultural products from Virginia farmers and will pay $300,000 back to the city over the next five years in tax revenue.

The investment will fund an expansion of Port City’s bottling and storage capacities. The funding helps pay for a 6,000-square-foot cold-storage warehouse down the street and added brewing capacity. Part of the city funding is dedicated to building a new bikeshare station at the site and expanding bicycle parking to encourage ridership to the brewery.

“Port City is Alexandria,” said Silberberg. “It gets to our core roots in manufacturing. This is unique to Alexandria and is an investment in our local businesses.”

Currently, Butcher says the company’s main challenge is its limited production facilities. Port City produces 17,000 barrels of beer each year, and the new facilities will allow production to grow to 50,000 barrels each year. The grant will also bring in 26 new jobs over the next three years in brewing, sales, and marketing.

“In 2012, when we created the fund, I was asked by a delegate if the fund would ever go to finance an urban environment project, specifically like one in Alexandria,” said Todd Haymore, former Virginia Secretary of Agriculture. “I told him yes. I’m happy today that Port City has proven me right.”

According to Stephanie Landrum, president and CEO of the Alexandria Economic Development Partnership, the local funding partially comes from bond financing. Landrum says Port City is the second company, after Motley Fool, to receive this kind of incentive grant. Landrum says the city will recover its investment within two years through increased property and retail taxes.

“In the case of Port City Brewing Company, we found a state incentive program that had not been used in the more urban parts of Northern Virginia, and determined that [Port City] qualified for the program,” said Landrum in an email. “The state program required a local match, so we worked with city staff and City Council to evaluate the economic impact of the project and identify the appropriate mix of in-kind and cash to meet the match requirement.”

Frank Shafroth, director of the Center for Regional Analysis at George Mason University, says the city-funded growth of the brewery is likely part of a broader strategy to add amenities to the city to draw in other businesses. Shafroth also noted that the investment in Port City aligns with the city’s goals of trying to lean its tax base more heavily on its commercial and manufacturing sector rather than its residential base.

“Every city and county, and state in the country looks for and competes to bring in businesses that might enhance either a city or county’s tax base or quality of life,” said Shafroth in an email. “Think about Metro and the new Metro station coming, and the near riot of growth along the Route 1 corridor — over time it will not only provide for faster and easier transit for commuters, but will also enhance assessed property values, thereby likely offering the city an option to reduce assessed property taxes on all the rest of us."

The Man Behind the Beer

Bill Butcher has worked in the drink business all his life. Butcher lived in Alexandria, where his family had since the early 20th century, and worked to promote the brand for a California wine company on the East Coast. But from his vantage point inside the world of alcohol branding and sales, he noticed another trend beginning to grow.

“I watched the craft beer business grow and evolve,” said Butcher. “But all of the beer my wife and I liked were coming from the West Coast. We were wondering why there weren’t more local options. At the time, D.C. was the only metro area without a microcraft brewery. We figured if we could make something quality, people would give us a shot.”

Butcher said Alexandria was a prime spot for the brewery, for personal and professional reasons.

“My family has been in Alexandria for a long time and I’ve always lived here, so it made sense,” said Butcher. “It was also important to be inside the beltway, in the heart of the D.C. metro area.”

Port City Brewery opened in early 2011 at their current location on Wheeler Avenue, but the process began around 2008. Butcher said an early challenge was convincing banks and suppliers to be willing to invest in a startup company right as national economy was starting to crash. Butcher started Port City with four fermentation tanks because it was the most the person he was buying them from wanted Butcher to risk.

“We ordered six tanks originally, but the company would only sell us four because they didn’t want us to overextend,” said Butcher. “I wasn’t worried. I had experience in the market. I was there my whole life. This was a strong market with expendable income.”

Butcher said the company also struggled at first to get financing.

“One of the biggest challenges was getting funding,” said Butcher. “It was 2008, 2009 when we got started and the banks weren’t lending to small businesses. We talked to 10 or 11 banks and they all said no.”

Finally, Butcher says he met with Kerry Donley, former mayor and at the time working with the Virginia Commerce Bank. Donley helped Butcher secure a loan and recommended Butcher work with Alexandria’s Small Business Administration. The relationship with the Small Business Administration eventually connected Butcher with the Alexandria Economic Development Partnership, which was largely responsible for the $500,000 state and city investment in the company.

In the beginning, there were just four employees at the company, Butcher included. Since then, that team has grown to 16, but Butcher still says people are surprised by how small the company is.

After opening in 2011, Port City’s Monumental IPA won the bronze prize at the 2012 Great American Beer Festival in Denver, Colo.

“It really started taking off in 2012 with the Great American Beer Fest,” said Butcher. “For a two-year-old brewery to win an award in IPA, that’s significant.”

The next year, their Optimal Wit won the gold award, while their Oktoberfest, Colossal One, and Colossal Two would both win awards. Butcher says the awards helped spread the word about Port City, but they couldn’t carry the brand alone. Butcher says building the brand was helped by years of knowing the right people from his experience in the wine business and hiring the right people to help market his product.

“You need the right people to present it,” said Butcher. “You need people who are beer experts and know how to compare the markets.”

Butcher says another appeal has been having the brewery be open to the public.

“People like authenticity,” said Butcher. “They like coming here and seeing the process. But ultimately, you have to make your sales on quality. Medals help, but that’s still just the direct result of a quality process .… The system won’t change, but we’ll have more tanks and more efficient bottling. It’s more of everything we do now.”

Butcher said his aims are to continue filling out distribution through the mid-Atlantic region.

“We want to grow into Pennsylvania, maybe West Virginia and South Carolina,” said Butcher. “But there’s still tremendous potential that hasn’t been served in D.C. We sell most of our beer around the beltway, but we can go deeper into the city market.”

For their future, though, Butcher reiterated that the company can’t afford to lose sight of continually improving quality as it works to expand its capacity.

“Quality is a process,” said Butcher. “We need to be constantly investing in our labs and in our people. We’ve made a commitment to only increase our capacity as long as we keep increasing our quality. So far, that’s served us well.”