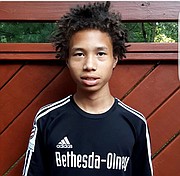 Adrien Cushing, 15, of Great Falls -- who attended Forestville ES, Cooper MS, and is 10th grader at Langley HS -- started playing recreational soccer for Great Falls and then travel soccer for them. He then moved onto McLean Hotspurs, Loudoun 00B Red, and recently joined US Soccer Development Academy at Bethesda SC Academy (DC United has the only other full US Soccer Development Academy here).

Adrien is also a 3-Star Rated Player with TopDrawerSoccer. There are only 162 players in the country (2019 year group) with a 3-Star or higher rating.

Adrien also won three straight "Best XI" honors this summer at the TopDrawerSoccer Showcases for DC/Baltimore, North Carolina, and Tri-State (N.J., Pa., Del.) He was the youngest defender at all of these showcases too.

Adrien is a defender with the Bethesda Academy U15s under U.S. Soccer Development Academy. His teammates include several players from the U.S. National Team as well as from English Premier League and Bundesliga Academy programs. During the Academy's 10-month season, Adrien will be playing other Development Academy teams from the Atlantic and Northeast Regions.