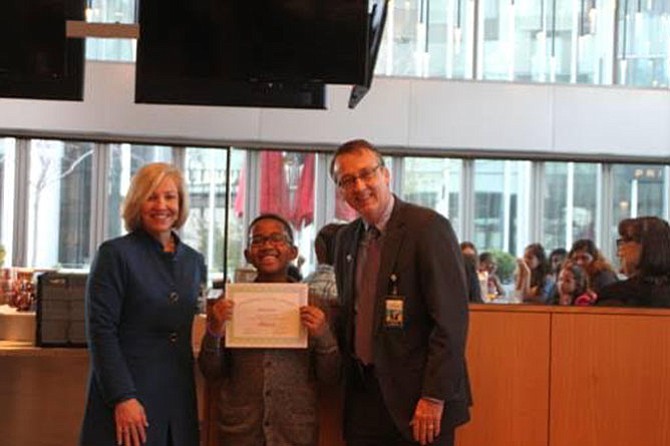 Chamber stars students outside of Earl’s Kitchen and Bar in Tysons Corner.

More than 190 attendees joined the event, including Dr. Scott Brabrand, superintendent of Fairfax County Public Schools, who was the speaker and co-presenter of the awards, and Maureen Loftus, youth and education chair for the Tysons Regional Chamber of Commerce. Each year, the Tysons Regional Chamber partners with area schools to celebrate and honor selected students who deserve recognition for positive potential or significant improvements. The Chamber Stars event celebrates the accomplishment of students who have persevered despite significant obstacles or personal struggles.

The award included the student selection of two books prior to the ceremony: one for their school library, and one for them to keep. Students and guests also enjoyed breakfast at Earls Kitchen and Bar and received individual awards recognizing their accomplishments.

The Chamber Stars program is possible because of sponsorships from Navy Federal Credit Union, LearningRx of Vienna, and Earls Kitchen and Bar of Tysons Corner.

“We’re so thrilled with the continued participation and exceptional students that make the Tysons Chamber Stars Event a success,” said Maureen Loftus, executive director of LearningRx of Reston and Vienna.