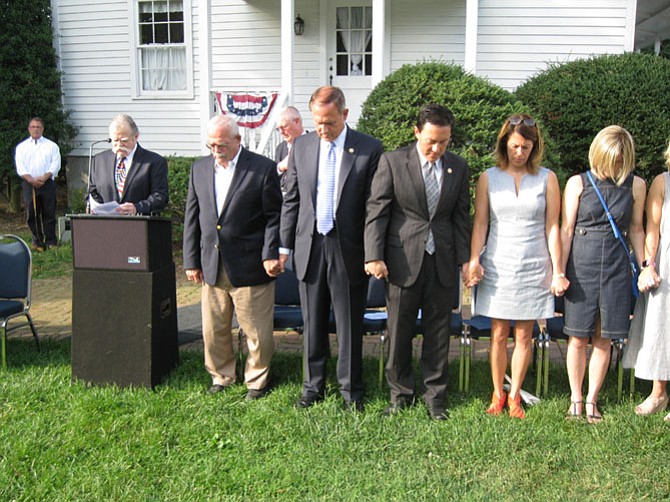 See more A Day to Remember photos on Facebook.

To commemorate the 15th anniversary of the Sept. 11, 2001, the Town of Vienna held A Day to Remember -- Patriot Day Community Commemoration on Sunday, Sept. 11 at the Freeman House Lawn on Church Street in Vienna.

With about 50 people in attendance, the event started out with the 8:46 a.m. ringing of the bells to mark the first terrorist strike on the north tower of the World Trade Center.

After the Presentation of the Colors by the American Legion District 17 Honor Guard, the event featured singer Heather Colbert, and an Invocation by the Rev. John Giunta.

The first to speak was U.S. Rep. Gerry Connolly (D-11). "We saw firefighters, policemen and women going up steps of the tower to try to save lives. We heard and saw heroism on Flight 93 where people were willing to risk their lives to prevent something worse from happening. We weren't going to be destroyed by this tragedy and out of it we would rebuild ourselves," he said.

Next, Town of Vienna Mayor Laurie DiRocco read "A Day to Remember" Proclamation, and then the Keynote Speaker, Del Richard L. Anderson (R-51), addressed the crowd.

"Whenever I am called to speak about this day, I feel wholly inadequate. How can one pay tribute to those immortal souls that were snatched from us on 9-11, 2001...We are talking about a day that will live in infamy because it struck the heart of America. But it did not strike the spirit of America...And so, it is a day of memory," said Anderson.

At the end of the ceremony, Phil Dunn, a long-time Vienna resident, played "Taps" on his bugle.