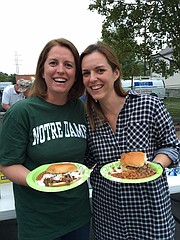 The second seasonal Chillin’ on Church block party drew in hundreds more guests than the debut party in June. Church Street lit up with music, games, food, and neighbors meeting neighbors. The party, spilling over to the Town Green from the Freeman House base, started at 6:30 and ran to 9:30. Families with young kids, teens, and older residents turned out for the mild evening. A Vienna woman even celebrated her 40th birthday there with barbecue from the Sons of the American Legion 180. Post 180 sold beer and three truck vendors sold sweets, wraps, and taters.

“It’s an excellent crowd tonight,” said Vienna Parks and Recreation Chillin’ on Church coordinator Brandy Wyatt. “We definitely have more people than we did in June, a lot more word-of-mouth. We are keeping it as a tradition next year, too.”

Early in the evening, the National Wildlife Federation recognized the Town of Vienna as a certified community wildlife habitat. Sponsored and promoted by the town’s community enhancement commission and resident nature conservation supporters, the certification validated 171 homes with Town of Vienna zip codes as wildlife habitats. A young tree was planted by the town to commemorate the honor. There are only about 100 communities across the nation to be so certified. The Ranger Rick mascot lent his support, as well, and the public helped to shovel symbolic dirt around the symbolic tree.