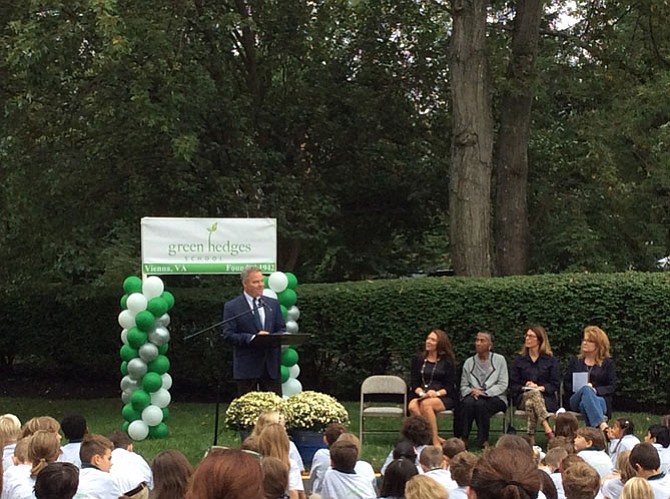 “It was a lovely tribute to our school,” said Head of School, Mr. Robert E. Gregg, III, “and to our ideals, which are alive and present.”

Gregg is Green Hedges’ seventh Head of School; he officially began his tenure in 2009. The 75th Anniversary Celebration commemorated founders Frances and Kenton Kilmer, who opened the school in 1942. 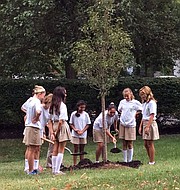 Nine middle-school Green Hedges “lifers,” students who have been attending the school since Montessori School at 3 years old, shovel dirt onto the newly planted pear tree to celebrate the school’s 75th anniversary.

“Two parents seeking the best education for their children were discouraged by what they found, and decided to start their own school in their own house,” Gregg recounted the story of how Green Hedges began in the welcoming speech for the celebration. “[They] understood what our current research has validated that children learn best when all facets of their brains are engaged.”

THE KILMERS “sought to provide a positive learning environment free from prejudice, and enriched curriculum that included the best in all the arts, a global exposure to history, and a commitment to citizenship and character,” according to the school website.

In addition to groundbreaking education, Mr. and Mrs. Kilmer were notably involved in civil rights issues, as well as in the building of the town’s library.

Mayor Laurie DiRocco read the Town of Vienna Proclamation honoring The Kilmer Family’s community contributions and Green Hedges School history during the ceremony, and added at the end, “We are so grateful to have you in our town, you are such a big part of our community.”

“I think 75 years is a huge milestone,” said Supervisor Cathy Hudgins (D-Hunter Mill). “The Kilmers were really trailblazers in how they approached education and the community.” Hudgins also participated in the celebration ceremony by reading the Fairfax County Proclamation.

Board of Trustees Vice Chair, Carolyn Brandon, explained that the celebration included a pear planting ceremony to honor the pear butter that the Kilmers used to make.

The Kilmer family had strong ties in the arts, which transitioned into the school curriculum. Frances Kilmer was the daughter of Impressionist painter, Frederick Frieseke, while Keaton Kilmer, was the son of the renowned poet Joyce Kilmer. The fourth-graders commemorated Mr. Kilmer by reciting his poem, “Trees.”

THE PEAR TREE was then ceremoniously planted by nine Green Hedges “lifers,” or students who began at the Montessori School at 3 years old and continued all the way to eighth grade.

“I thought it was a lovely ceremony and that it captured the heart of the Green Hedges School with a nice mix of students and family,” said Mayor DiRocco.

Noelie Kilmer Angevine of Germantown, Md., one of the Kilmer’s ten children, shared in the school’s celebration although she did not formally participate in the ceremony. Angevine stood up to pose an arithmetic question to the current students of Green Hedges, asking them to calculate her age at the opening of the school in 1942.

Angevine was happy to see that Green Hedges students looked happy and relaxed.

“The school promotes curiosity, the freedom to make mistakes, delight in classes and the love of nature,” said Angevine. “I am so happy to see that, because the poor standards in our country are discouraging that by making everything depend on how [students] test.”

While the campus has grown, Angevine said that the school philosophy has remained the same.

Supervisor Hudgins said that having the school in Vienna gives parents a wealth of choices for their children’s education in the community. The comfort level and closeness of the staff and students at Green Hedges is really special, Hudgins said, “some children really need that, and we don’t always know that.”