Community turns out for birthday party on Feb. 28. 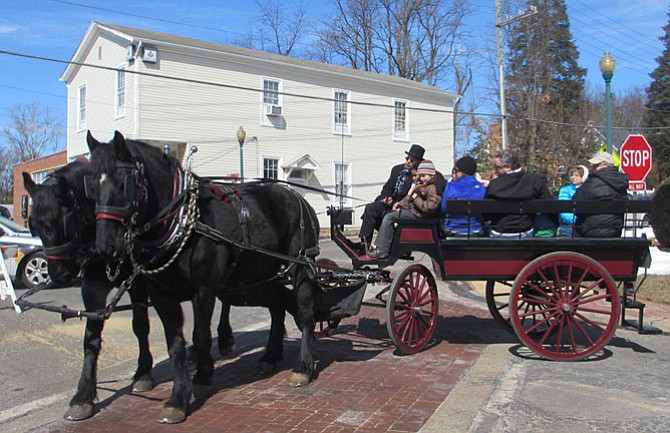 All members of the 1890 Vienna Town Council voted to accept the ordinances of incorporation.

The Town of Vienna, in partnership with Historic Vienna, Inc., celebrated the town’s 125th incorporation anniversary, calling it a “birthday” ceremony, on closed-down Church Street and the grounds of Freeman House on Saturday, Feb. 28. A time-travel play, written by HVI’s Jon Vrana, featured contemporary children learning first-hand about Vienna’s founding by principles of 1890.

As chilly and snow-blanketed as it was on Saturday, hundreds of adults and children watched the short play on the Church Street stage and stayed around for farm animals, horse-drawn carriage rides, and roasting marshmallows over open fire pits. After guests sang “Happy Birthday,” they retreated to a heated tent for food, cupcakes and hot beverages.

The General Assembly of the Commonwealth of Virginia commended Vienna on its 125th anniversary of incorporation with a proclamation signed by the House of Delegates and the state Senate in late January. The Fairfax County Board of Supervisors is recognizing Vienna at its first March meeting.

The time-travel play, a magical opportunity for today’s youngsters to learn about Vienna’s history, anchored the birthday program.

Dignitaries and elected officials participate in the 125th birthday celebration commemorating incorporation in 1890.

Vienna delegate to the General Assembly Mark Keam joked that many of the issues that Vienna addressed in its incorporation ordinances in 1890 – from concealed carry to taxes – are confronted today by the General Assembly. Keam raised his children in Vienna.

Congressman Connolly referred to Vienna as having a “sense of place, belonging, inclusion, and community. “Connolly’s district,” he said, is one that is “responsible for one another.”

Board of Supervisors chair elicited laughter from the stage when she called Vienna the “most-partying place in Fairfax County.” There’s always an event going on in Vienna, she said. The bigness of the County stops in Vienna with its small-town atmosphere. Hudgins reiterated the theme of Vienna’s community spirit. “Vienna serves as a symbol of small-town living.,” she said.

Abram Lydecker explained to the students composing their Vienna history report that Vienna was one of the few precincts in Virginia to vote against secession from the Union. Many people living in Vienna, Lydecker said, had “ a lot of ties” with the North, having come from states north of Virginia to settle in Vienna area. “ … and we love the Union.” After the Civil War, many Union soldiers settled in the Vienna area.

FREEMAN HOUSE AND STORE, the Vienna train station, caboose and Little Library were open to the public. Refreshments were served in a heated tent on the lawn of Freeman House. Caffe Amouri donated hot chocolate and coffee.

Throughout 2015, the Town of Vienna and Historic Vienna, Inc. will continue to celebrate Vienna’s 125 years as an incorporated town. To learn more about Vienna’s 125th birthday events and the town’s history, see http://www.viennava.gov/index.aspx?NID=1178. Anniversary events are posted there.

Church Street, from Lawyers Road to Mill Street will close to vehicular traffic on the last Sunday of each month from May through October. Outdoor special events and activities are planned. A “Dinner in White” is scheduled for September.