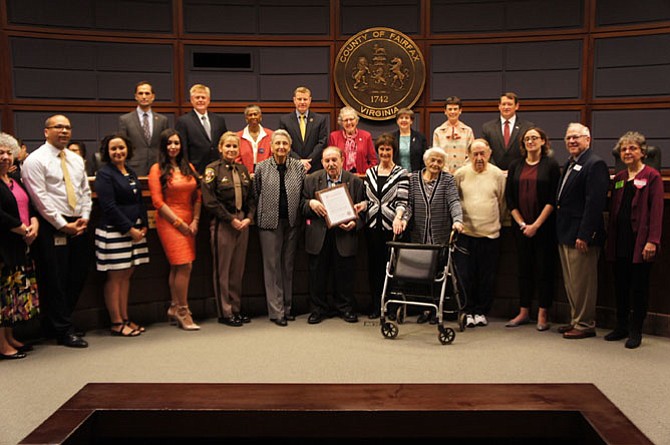 The Board of Supervisors issues a Proclamation that April is Child Abuse Prevention Month and it was a challenge to get all involved in this cause to fit into a photo.

Members of the Herndon-Reston Indivisible group came to the Board of Supervisors meeting to learn what stance the county would officially take on immigration enforcement by county personnel.

The Fairfax County Board of Supervisors usually presents a fairly united front at the open-to-the-public general board meetings. The supervisors may ask for clarification from staff on a particular item under consideration or express a less than enthusiastic response to a motion, but more often than not, “Approved Unanimously,” or “the motion carries without exception” are the words that are entered into the record.

At the meeting on April 4, with a packed agenda and 47 speakers registered to provide testimony on the Advertised FY 2018 Budget, it was the chairman’s resolution on “Diversity and Inclusion” in the county that sparked some polite but pointed debate on the dais.

For Chairman Sharon Bulova, the resolution was something that the residents of the county needed to hear from their leadership.

“Fairfax County is a welcoming and accepting community … we are a safe, diverse and caring community, and if that harmony is threatened, I believe we have a duty to speak out and clearly articulate our values,” the chairman stated before reading her proposed resolution.

BULOVA was alluding, in part, to an incident in February, when agents of the U.S. Immigration and Customs Enforcement (ICE) detained a group of homeless men as they were leaving a church-run hypothermia shelter in Alexandria. This action, and a surge in ICE raids and sweeps, has caused a wave of fear in the immigrant community, an outpouring of concern from social service providers and law enforcement personnel, and anger from social justice organizations like the members of Herndon-Reston Indivisible who attended the meeting, waiting to hear the county’s official line.

“Whereas, Fairfax County Police successfully engage in community policing, which requires the trust of residents who are not afraid to call law enforcement if their safety is at risk, or to report information that may help solve a crime,” reads one segment in the resolution, acknowledging fear and the anxiety that has accompanied the see-saw of Trump administration proposed travel bans, the rise in hate crimes, threats against ethnic groups and religions, and incidents of vandalism, particularly at Jewish cemeteries and Muslim mosques.

Supervisor Pat Herrity (R-Springfield) didn’t disagree with the sentiments of inclusion that framed the resolution, but he said it seems like “a statement done for political reasons.” In Herrity’s view, the resolution fails to address the “real issues in front of us,” citing the impact on the public school system, other services, and the recent increase in gang violence.

Supervisor Jeff McKay (D-Lee District) was quick to respond, saying that he resented the attitude that blame for gang violence should be directed only at the immigrant community, insisting that the resolution was the “antithesis of a political statement … it’s our moral imperative … to tell our community where Fairfax County stands.”

McKay later added that if this resolution was indeed political, then it represents a political stance he was proud to be associated with.

The waters around the resolution were further muddied when Supervisor Cathy Hudgins (D-Hunter Mill) suggested the resolution should be more specific and asked that language be included to clearly oppose any immigrant registry. This request opened another round of exchange among several of the supervisors. Bulova did not see the value in having the county engage in a series of “what if” scenarios and develop hypothetical responses. At one point, Hudgins made the remark that she felt she was “being placated” by the response to her request, one which she sees as showing the real leadership qualities of the county.

Supervisor Dan Storck (D-Mount Vernon) finally summed up the resolution as being a “place to start … a great foundation,” painting the motion as more of a “high-concept” statement than a procedural piece, or a response to deeper issues being raised by other supervisors.

The motion did carry, but not before Supervisor John Cook (R-Braddock District) made it clear and for the record that the resolution was not declaring the county a so-called “sanctuary jurisdiction.” “It does not say that, and people shouldn’t think that it does.”

Nevertheless, the Herndon-Indivisible supporters and others in the crowd applauded the outcome that does make clear that Fairfax County police are “not asked to assume the responsibilities of federal immigration officials … it is the responsibility of our officers to ensure the safety of Fairfax County residents through community policing rather than through immigration enforcement.”

UNANIMOUS APPROVAL was afforded several other matters before the board, including two proclamations offered by Cook; one declaring April as Sexual Assault Awareness Month, and another adding Child Abuse Prevention as a focus for the month. There was also no dissension on the proclamation marking April 24 as Holocaust Remembrance Day in Fairfax County. Holocaust survivor Michele Margosis accepted the document from Bulova.

Later in the session, the board voted to approve a “Sewer Ordinance Amendment” which will raise rates for water consumption by 7 cents per 1,000 gallons, raise the quarterly Base Charges, and other related fees, while reducing the daily flow per unit from 300 gallons to 280 gallons per day. The rate increases were applauded by speaker Reba Elliott, who is the executive director of Faith Alliance for Climate Solutions. Elliott thinks more funds are needed to keep water supplies safe in the area. “Go storm water treatment!” Elliott called out as she left the speaker’s podium.

“Thank you,” replied Bulova. “I honestly think that’s a first for us.”

Fairfax County Board of Supervisors general and committee meetings are streamed live via the county’s website, and can be found after the event in the video archive. Agenda items and materials are also available on the site. See www.fairfaxcounty.gov.