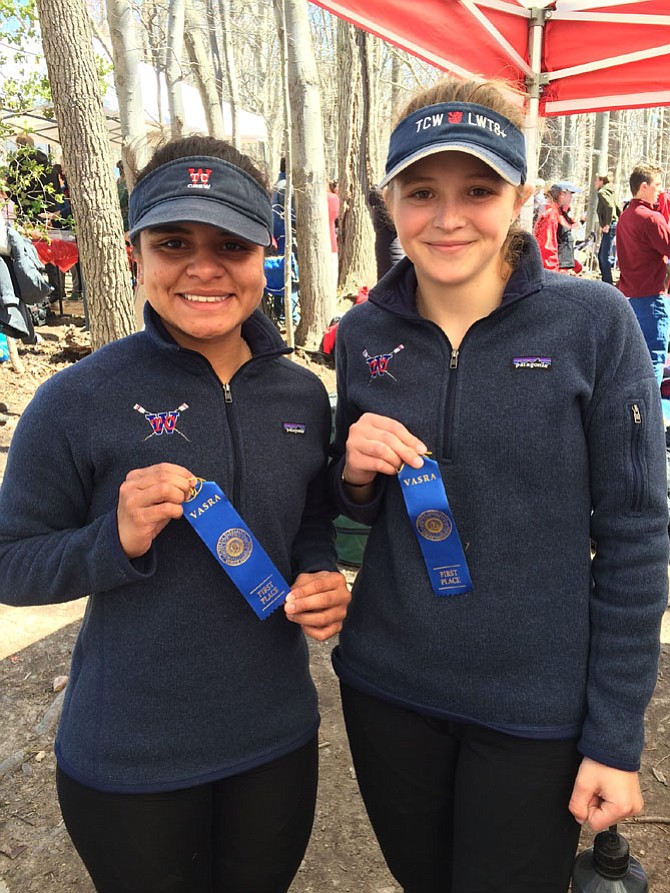 Rowers from T.C. Williams and 26 other high schools faced strong headwinds and whitecaps at an abbreviated Walter Mess Regatta at Occoquan on April 8 before safety concerns caused race officials to cancel the day-long competition at the half-way point. While the shortened contest left some of the Titans’ strong upper boats on dry land, it did not prevent TC from recording more wins and solid finishes in their second regatta of the 2017 spring season.

Leading the Titan charge early in the day and in their inaugural outing in a lightweight double were TC’s Cecelia Fernandez and Lauren Kelly. The Titan duo rowed to victory in a combined First/Lightweight Women’s doubles category with a time of 7:30.6, 5.6 seconds ahead of second place Colgan High School. Compared to rowing with a single oar in 8- and 4-seat boats with a coxswain to steer, in doubles racing rowers pull two oars each and steer without a coxswain, which presents particular obstacles in high wind conditions.

“The moment that we arrived it was constant motion; unstrapping [the boat from the trailer], going to the coxswain meeting (my first), weigh-ins, then warming up,” said TC senior Kelly. “We had anticipated the wind throughout the whole week and I knew that steering would be a challenge. I hoped that our limited water time would at least help me anticipate the race.”

“We got to the start line about 15 minutes before our race,” said senior oarsmate Fernandez. “I could feel a pit in my stomach when they told us to ‘sit ready’ and then ‘go’! Through the first half, we were fighting head-to-head with Colgan. When we reached the half way point, I knew it was time to make our move and pick up the [stroke] rate. Then we hit the sprint and all I could think about was getting that rate up like we had practiced earlier that week.”

“We pushed ahead then dominated the sprint,” said Kelly. “I was in a state of shock and couldn't believe that we were able to do that, but it beats flipping.” Fernandez added that when she “heard the sound of the air horn as we crossed the line I felt like I could collapse with my legs burning. We both turned to the other girls and smiled and said ‘good race.’ As hectic as the steering and the conditions were, I can honestly say that that was one of my best races yet and I am so happy and grateful to have been able to race in a double with my best friend.”

For the second week in a row, the resilient TC Men’s First 4 fought punishing winds and whitecaps to win their race, finishing with a time of 6:32.7 and edging Woodbridge by 5.3 seconds. The Men’s First 4 includes Connor McGivern, Asher Elkins, Julian Depeyrot, Jacob Souza, and coxswain Michaela Gleeson. High winds moved race officials to cancel the remainder of the regatta shortly after this race.

In other races, the TC Women’s Novice 8 boat finished second behind Yorktown, and the TC Men’s Novice 8 A boat placed third in their race behind Oakton and McLean.