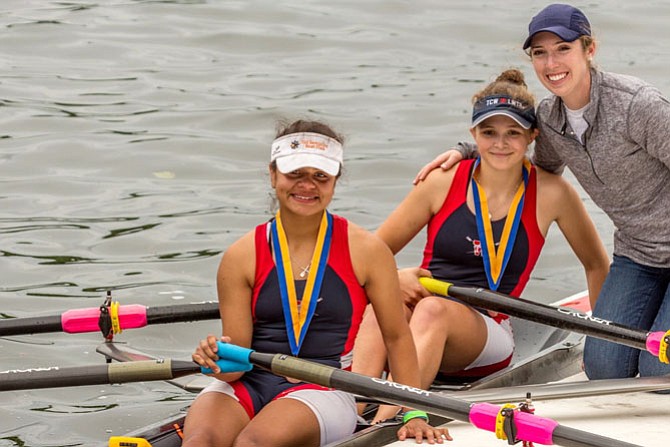 The TC Williams crew team continued their tradition of competing against some of the best boats from the U.S. and Canada and coming home with medals from the prestigious Stotesbury Cup Regatta, held on May 19-20 on the Schuylkill River in Philadelphia.

Rowing to the medals dock to claim bronze medals were the Women’s Lightweight Double, TC seniors Lauren Kelly and Cecelia Fernandez, in just their fourth race as doubles this season. The duo clocked a fast time of 5:39.07, behind silver medal winner Germantown Friends and winner Baldwin, both of which won their semi-final matches.

And in one of the most exciting races in two days of fierce competition, the Titan Women’s Second 8 blazed down the course to finish with a time of 5:10.11 to capture the bronze, a mere .7 of a second behind second place Holy Spirit and first place National Cathedral School, both of which won their semi-final races, and the latter of which the Lady Titans beat at the Charlie Butt Regatta in Georgetown in April. Members of the TC Women’s Second 8 include Ailysh Motsinger, Grace Fluharty, Grace Hogan, Emma Carrol, Rachel Knapp, Ella Benbow, Tori Cook, Blythe Markel, and coxswain Camila Cardwell.

“I am so very proud of our team,” said TC Women’s 2V 8 coach Jaime Rubini, who also coaches the Women’s First 8. “The Second 8 fought very hard in the final, having had to overcome a sideways windy start to win the bronze medal.”

The Titans brought eight boats and 55 athletes to Stotesbury, the largest high school rowing event in the world, to compete against 5,390 athletes in 963 boats in 30 race categories from 193 schools.

High humidity and temperatures in the mid-90s provided a literal component to heat races on May 19, where rowers also faced a stiff headwind in 1500 meter sprints to narrow race categories from as many as 71 boats to 18 or 12 boats for semi-finals on the six-lane course.

While heat races eliminated approximately half of all the rowers competing at Stotesbury, all eight TC boats placed well enough in their heats to advance all 55 Titan athletes to the next round; seven of the eight TC boats finished semis in the top half of boats in their categories.

In exciting head-to-head semi-finals, the Titans experienced the exhilaration of races that propelled them into finals, and the agony of missing the finals by seconds. The TC Women’s Frosh 8, Lightweight Doubles, and Second 8 each placed second in their semi-finals to advance. In a semi with the top three boats advancing, the Men’s Lightweight 8 placed close fourth with a time of 4:33.30, the fifth fastest time of all the Lightweight boats in semi-final racing and seconds behind LaSalle, eventual Lightweight bronze medal winner Gonzaga, and gold medal winner St. Joseph.

The Men’s First 4 faced a similar fate, placing third in a race where the top two advance with a time of 4:54.46, the sixth fastest time of all the First 4 boats in semi-final racing, behind Walter Johnson and eventual First 4 gold medal winner Father Judge. The Women’s First 8 also placed third in another top-two semi behind James Madison and Whitman with a time of 4:57.40, advancing to the Women’s First 8 Petite Finals.

In the nail-biting finals on Saturday afternoon, with overcast skies and weather that felt more like March than May, the Women’s Frosh 8 rowed with strength and heart to finish fourth with a time of 5:12.79, an achingly close .67 of a second behind Whitman, second place Ocean City, and winner Saratoga, all three of which finished first in their semi-final races. The Women’s First 8 finished third with a time of 5:08.23 in the Petite Final, the sixth fastest time of the 12 boats that competed in the Women’s First 8 Finals and Petite Finals, showing the comparative strength of these elite boats and their rowers.

Coach Rubini proudly noted that the “1V rowed their way to the Petite​ final, having their best row of the season and looking to the future at [the Scholastic Rowing Association of America] National Championships this coming weekend.”

The Titans take seven boats to Nationals on May 26-27, set on the Cooper River in Camden, New Jersey for the finale of this season’s domestic regattas.