Celebration of giving back to serve people in need of food, shelter, affordable housing, childcare and other human services. 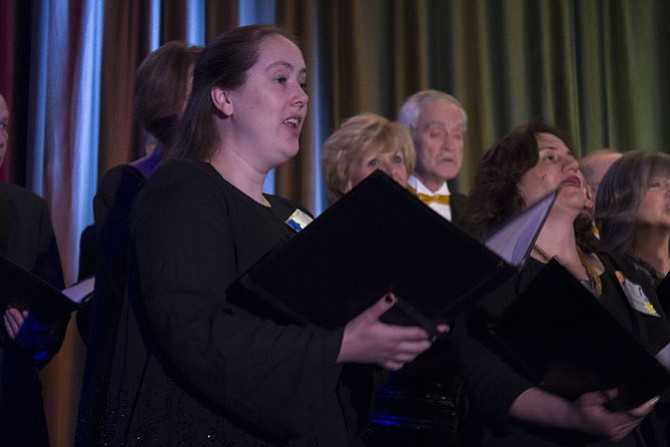 Cheryl Kennedy, a soprano with the Reston Chorale, sings “Feelin’ Groovy” with her fellow Chorale Singers to open the program. Photo by Fallon Forbush.

Reston raised over $515,000 in one night to help those in need in their 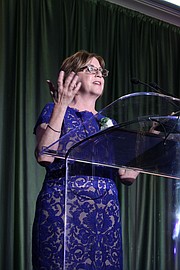 The money was raised at the Hyatt Regency Reston hotel in the Reston Town Center during the 26th Annual Best of Reston Awards Gala on Thursday, April 6. The awards recognize those in the Reston community —people, businesses and organizations— involved in giving back to the greater Reston and Dulles corridor.

“Sometimes they list me in the program as the auctioneer, but I don’t have anything tangible to sell,” Virginia Del. Ken Plum (D-36) said during the gala before leading attendees in an auction to benefit Cornerstones. “Fact of the matter is, I’m not really even an auctioneer. But what I do have to offer for you is what you can do for the people who are in need … Here, we’re going to talk about hope and that’s what I’m going to ask you to join with me to do is to buy some hope for some people.”

The $515,435 raised was presented at the end of the night in a check to Cornerstones, which the nonprofit organization will use to support its mission to serve people in need of food, shelter, affordable housing, childcare and other human services.

Presented in partnership by Cornerstones and the Greater Reston Chamber of Commerce, the gala has raised funds for Cornerstones’ social services while showcasing community and corporate involvement for the past 26 years.

“For the 22 finalists and the incredible honorees that we’ve met tonight, you are making a difference and it is in the spirit of everything that is Reston,” Cornerstones CEO Kerrie Wilson said during the gala. “The work we’re doing now throughout the region, we thank you and we really want to celebrate and honor your work tonight.”

She took some time to remind gala goers of the reason driving their work.

“I think it’s always surprising to everyone that right here around the block is a homeless shelter where —last year— 600 men, women and children stayed there temporarily while we helped to find them homes,” Wilson said.

She was referring to the Embry Rucker Shelter that is supported by Cornerstones that sits in the “shadow of the Reston Town Center” on Bowman Towne Drive, she said.

This shelter was the site where Wilson helped unveil the county’s 2017 Homeless Point In Time Count earlier in the week, which saw a reduction in the homeless population.

“I’m so proud to say … in eight short years, 47 percent reduction in homelessness in Fairfax County,” she said. “There are many of my homeless partners … in this room who are a big part of that and helped us get there.”

While the night was meant to celebrate incredible acts of kindness and the success of Cornerstones’ work, Wilson told the audience that they still “have a lot to do … and it’s important that we keep going because we still need to do more.”

The 26th Annual Best of Reston Awards Gala celebrated the community service being done to support Cornerstones and its overarching goal to end homelessness. Out of 22 award finalists, eight honorees were revealed during the gala: