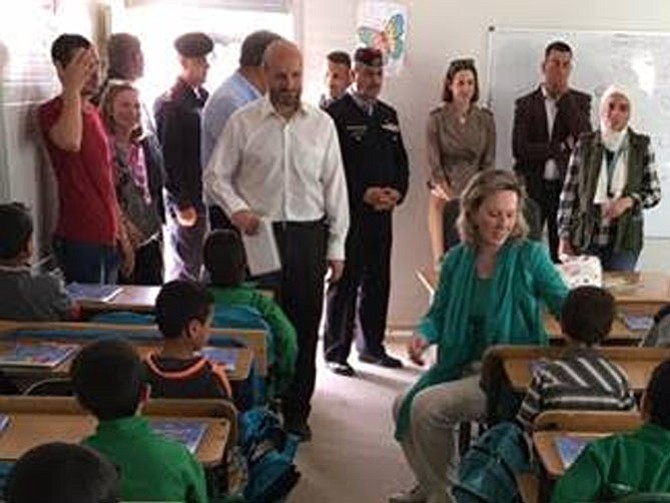 The Indivisible group demonstrated against the Trump administration and Congress for its slow investigation of alleged Russian ties to the president and the presidential election on Friday, April 14.

Members of the Indivisible VA District 10 Facebook group planned daily demonstrations outside of U.S. Rep. Barbara Comstock’s district office in Sterling last week while Congress was in recess for the Easter holiday.

However, Comstock was not in the country.

She was visiting the Middle East with three of her colleagues: U.S. Reps. Darrell Issa (R-Calif.); Juan Vargas (D-Calif.); and Claudia Tenney (R-N.Y.).

"As believers around the world observed Holy Week, I appreciated the opportunity to visit and hear from those who serve our fellow man – our military men and women and national security leaders, our State Department and diplomatic leaders, and our humanitarian partners serving the refugee population. The work they have done is extraordinary and it was instructive to see how they work together to meet the challenges of the refugee population and the region, and to bring more stability to the Mideast. We met with the mothers, fathers, teachers, health care providers, and children at the refugee camps and heard from them about life in these camps and the desire of the refugees to be able to go home, and the vital support they still need. It's clear that Americas' leadership in the region is essential to marshal the international community, and our allies and strategic partners – in order to restore stability and reinvigorate our common goal of eliminating the threat of ISIS and terrorism."

During the trip, the lawmakers met with Egyptian President Al-Sisi, Lebanese Minister of Education and Jordan Prime Minister Hani Al-Mulki.

While Comstock was visiting Egypt, Jordan and Lebanon, the Indivisible group had two shifts of about a dozen people demonstrating outside of her office each weekday, according to Jan Hyland, a member of the group.

“Generally, folks spend some time holding a banner and signs for traffic along Route 7, then go up to the office to share their questions and concerns with staff — always urging a town hall,” Hyland said in an email.

Each day of the groups, Reclaim Recess demonstrations had a focus:

On Friday, April 14, the group delivered a basket full of messages that it collected from the public during the week of protests.