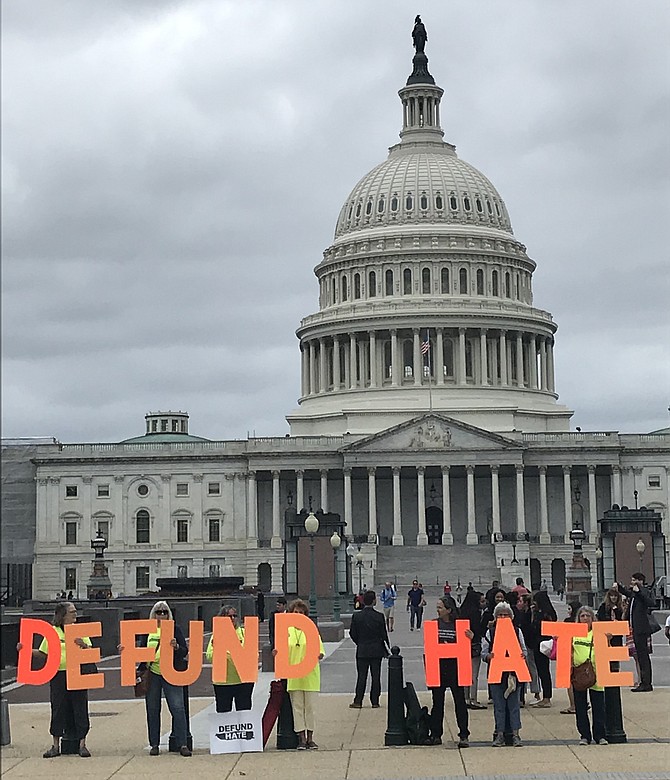 Members of Herndon-Reston Indivisible (HRI) protest in front of the U.S. Capitol, urging Congress to fight detention, raids and family separation by defunding them through the congressional appropriations process. Photo by Mercia Hobson.

Members of Herndon-Reston Indivisible (HRI) prepare to enter the office of Congresswoman Jennifer Wexton (D-10), to deliver a letter urging her to fight detention, raids and family separation by defunding them through the congressional appropriations process.

Del. Kenneth R. "Ken" Plum (D-36) joins Herndon-Reston Indivisible protestors in show of solidarity with immigrants as he holds up a sign saying, "DEFUND HATE" in front of the U.S. Department of Homeland Security U.S. Citizenship and Immigration Services building at 2675 Prosperity Drive in Fairfax.

On Monday, Sept. 9, members of Congress returned from recess. Four days later, on Sept. 13 in a doubleheader near their home turf, members of Herndon-Reston Indivisible (HRI) took to the streets of Virginia and the District of Columbia in a force of activism. HRI members from Reston, Carrie Bruns, Joanne Collins, Diana Smith, Sally Misenick and Leah Findlay; Herndon residents, Sharon Wunder and Sherry Blanton; and Vienna resident Meredith Haines, stood with immigrants in a national day of action, part of the Defund Hate Coalition to fight detention, raids and family separation by defunding them through the congressional appropriations process.

At their first stop, HRI members met in front of the U.S. Department of Homeland Security U.S. Citizenship and Immigration Services building at 2675 Prosperity Drive in Fairfax. There they held their distinctive illuminated letters that spelled out the words, "DEFUND HATE."

Del. Kenneth R. "Ken" Plum (D-36) joined the protestors and held up a sign announcing for himself, "DEFUND HATE.”

HRI member Diane Smith of Reston who took part in the protest explained the meaning of “Defund Hate” as "a nationwide action initiated by Indivisible to demand Congress stop the administration's un-American and inhumane policies against asylum seekers and immigrants, including separation of children from parents, mass incarceration, profiling, and other abuses." Smith added: "The goal is for Congress to ensure the FY20 Department of Homeland Security Appropriations Bill reduces funding for U.S. Customs and Border Protection (CBP) and U.S. Immigration and Customs Enforcement (ICE) and ensures these two agencies cannot misuse funds."

AFTER AN HOUR OF PROTESTING, HRI members traveled to their next site, the U.S. Capitol in Washington D.C. where they stood once again in protest with their letters spelling out, Defund Hate. Car horns sounded in support of the protestors; verbal remarks sounded against the support of the protestors. Through it all, the demonstrators remained firmly planted for their second hour.

Standing in their yellow t-shirts, the phrase, "It's a "Marathon, Not a Sprint," showed when members turned around. “We knew, even in the early days of the Trump administration, that our fight would not be accomplished quickly. We are in for the long haul, to defeat policies against immigration. … This motto reminds us not to become discouraged and to never give up in our efforts,” said Carrie Bruns of Reston.

Shortly after 3 p.m, HRI members lowered their letters, bagged them and walked to the offices of U.S. Rep. Jennifer Wexton (D-10) and U.S. Rep. Gerald Connolly (D-11). HRI members left letters addressed to Wexton and Connolly demanding they and other members of Congress defund hate.

MEREDITH HAINES OF VIENNA is a member of HRI. Haines is also an immigrant and participated in the #DefundHate campaign. Asked why she attended, Haines stated, "The #DefundHate campaign speaks to the cruelty of the administration's actions regarding immigrants and refugees. I am an immigrant, like one-third of Fairfax County residents, so my perspective on the issue is not unique... Indivisible has written a manual, literally, for grassroots progressives on how to be effective, and seeing a campaign move the needle on an issue is invigorating, as is being around like-minded people. It is always a good time to be on-site with the Herndon-Reston Indivisible crew."