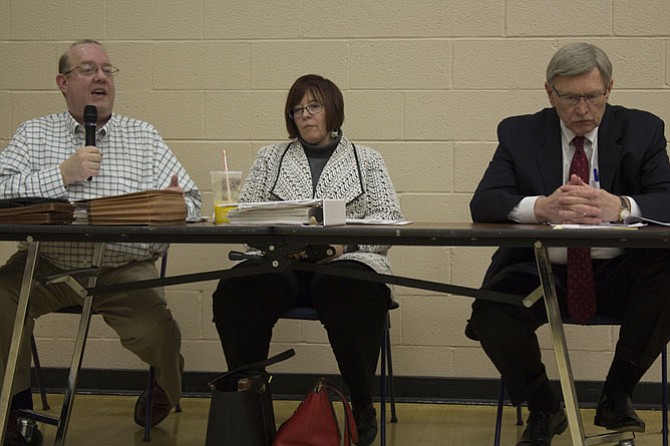 Esther Lee, vice chairman of the Fairfax County Economic Development Authority, told the crowd that one of the biggest attractions that draw businesses to the county is its school system. She expressed her concern for maintaining the quality of FCPS schools and encouraged officials to find new ways to increase revenues for the county.

“There’s a lot of pain in [the budget] for both the county and for the schools,” Foust said during the meeting. “Both are going to have to make some cuts.”

EARLIER THIS MONTH, the Fairfax County Public Schools projected a $57 million shortfall in its budget for next school year. Kristen Michael, assistant superintendent of financial services for the FCPS, had slightly encouraging news for the audience: the gap had shrunk by $8.6 million.

This adjustment is a result of the state finalizing its budget, which includes more support than FCPS anticipated. FCPS also made some new changes that helped to reduce the funding gap.

An additional amount of funding from the FCPS’s 2017 fiscal year budget is being carried over into the new budget and FCPS negotiated new cost savings for its employees’ healthcare.

“We did go out to bid and rebid our pharmacy contract for this year, which resulted in significant savings that helped us keep that cost low,” Michael said during the meeting.

Still, the county must contend with a potential $48.4 million gap between what FCPS is requesting versus what it has available.

The FCPS is scrambling to close the gap.

The FCPS will present its budget to the Board of Supervisors on Tuesday, April 4. Before FCPS adopts its budget, which is planned for May 25, it will hold budget work sessions on Monday, April 24; Monday, May 1; and Thursday, May 18.

These work sessions will include discussion on changes to its Educational Employees’ Supplementary Retirement System of Fairfax County (ERFC) pension system, which is projected to cost an additional $11.4 million in fiscal year 2018. The changes that the FCPS is considering include implementing $4.7 million in reductions to the system by June in time for the fiscal year 2018 budget.

Recommendations include lowering the interest crediting rate on all member accounts of the FCPS pension system from 5 percent to 4 percent. The FCPS is considering more changes for new or nonvested members, including instituting a minimum retirement age of 55; increasing the period for calculating the final average salary from three years to five years; and changing the cost-of-living adjustment to equal 100 percent of the Consumer Price Index with a cap of 4 percent.

More cost-savings measures proposed by the FCPS include adding $3.8 million in athletic fees and delaying the start of music programs from the fourth grade to fifth grade, which would save $2.8 million. Another would save $22.8 million by increasing class sizes for all grade levels by one student.

While the rest of the county’s budget is balanced, sacrifices were made to make it happen.

Some initiatives the county had previously prioritized will go without funding. The priority items that Edward Long Jr., the Fairfax County executive, chose to snub in his advertised fiscal year 2018 budget include:

Also underfunded is the 1.65 percent cost-of-living adjustment for all county employee salaries. This line item would cost $19.8 million.

“Based on the funding that the county executive had available to him and the decisions he was making in terms of the allocation, that [market rate adjustment] is not funded,” Joe Mondoro, CFO for Fairfax County, said during the meeting. “Again, [the county executive] did fund partially the increases to employees, but not fully.”

THE UNCERTAINTY surrounding the federal government and the new Trump administration worried panelists.

“Fairfax County has had significant challenges over the last several years with respect to our budget, with respect to our economy,” Foust said. “Some of the things that are challenging us the most are the fact that for so long we were dependent on the federal government to basically support our economy and federal spending is way down.”

Foust wants to see Fairfax County diversify its revenue sources and turn away from federal government dependence. But he cautioned the shift would take time.

“We’re not going to be able to solve all of these problems at once,” Foust said. “It’s just … they’re too big.”

This year, the county will not raise taxes to solve its predicament.

“Modest tax increases is not something we shy away from, but last year’s was fairly dramatic because we needed to give a big shot to the schools … To follow that along with another tax increase this year would have been unsustainable,” Foust said.

More than 20 million square feet of office space in the county is vacant, according to Mondoro, who also said the local real estate market underperformed in 2016.

“We are very dependent on the commercial office market to subsidize the services and the quality of life that we have and gotten used to in Fairfax County,” Foust said. “With that challenge, our budget this year is once again pretty difficult.”

“Clearly, we are overly or excessively reliant on real estate revenue for the general fund,” Mondoro said. “In the environment that we’ve been in where that growth has been very low, the impact on the general fund is significant.”

Mondoro brought up the November 2016 election where the county tried to diversify its revenue by implementing a meals tax referendum, which residents voted down.

The Washington Metro Area Transit Authority will continue to increase its financial need as the transit system makes repairs and adds new track. The county’s coffers are one source Metro intends to dig into.

The county paid $121.5 million towards WMATA’s operating budget during fiscal year 2017 and is anticipating paying $141.4 million in fiscal year 2018 — an increase of nearly $20 million. Though there is an increase, the county’s general fund contributions will remain flat as state aid and gas taxes cover the increase. It’s WMATA’s capital budget that is troublesome.

“The level of capital support is not sustainable going forward,” Mondoro said.

The county’s general fund was not “dramatically impacted” this year, Mondoro and the other panelists are fearful for the future impact that Metro’s financial challenges will have on the county.

“We’re looking at a potentially really serious hit to our ability to fund other services because of the needs of Metro,” Foust said.