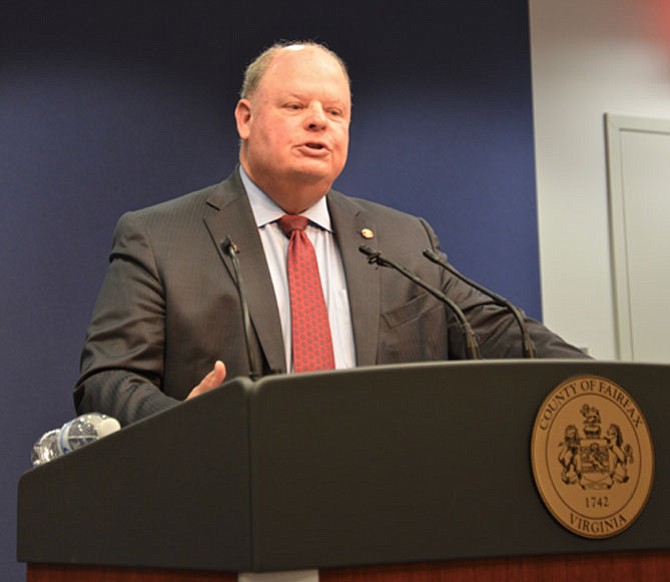 County Executive Ed Long said the proposed budget maintains commitment to the county's financial policies addressing needs for both county and schools, but in the end "the county's needs are much greater than our resources." Photo by Andrea Worker.

Members of "Invest in Fairfax" rally at the Government Center during the presentation of the proposed FY 2018 budget.

An exercise in “triage and trade-offs” was how Mount Vernon District Supervisor Daniel Storck described the FY 2018 budget as proposed by County Executive Ed Long to the Fairfax County Board of Supervisors on Tuesday, Feb. 14.

“There are really no surprises here, but it is still sobering” to see the results in black and white, added Supervisor Jeff McKay (Lee).

Long is proposing a General Fund budget of $4.10 billion.

The highlights of the 60-plus slide presentation include:

The proposed budget is balanced at the current real estate tax level of $1.13 per $100 of assessed property value and the county retains its Triple-A Bond rating.

By creating a budget without increasing the current tax rate, a number of county priorities cannot be funded, according to Long.

The items that have been set aside in the multi-year budget include a Market Rate Adjustment of 1.65 percent for county employees, funding for the second year of the Diversion First program, police span of control positions that were recommended by the Ad-Hoc Commission and a consultant study, public safety staffing plan, additional funding for employment and day support for individuals with developmental disabilities, information technology investments, and funding to replace fire and rescue apparatus. These items together carry costs upwards of $125 million.

The budget falls $61 million short of the amount requested by the School Board. To bridge that gap would mean a real estate tax increase of 2.5 cents, according to Long.

About 40 citizens rallied in the lobby of Government Center — until they were asked to vacate the premises and continue their demonstration and press conference outside the building. Led by Dave Broder, “Invest In Fairfax” made its appearance to “reject the FY 2018 budget proposal.” The group is a coalition of families, teachers, small business owners, county employees and firefighters, mental health workers and others. “It’s unacceptable that in the wealthiest county in the nation, the county executive would balance the budget by cutting mental health funding, cutting programs for people with disabilities and breaking promises to our frontline professionals.” Broder and his group are calling on the public to engage in the budget process and make their voices heard. “We need to remember that these services and our schools are largely what made Fairfax County great and they need to be protected.”

LONG ATTRIBUTES the majority of the county’s fiscal woes to sluggish economic growth. In the 10 years between FY1998 and FY2008 the county’s economy grew annually by about 6.5 percent. Since then, growth has slowed to 2.1 percent — less than a third of the growth posted in the prior decade.

“We have to also add in the effects of sequestration and the decrease in government contracts,” said Long.

The largest portion of the 1.1 percent increase in total employment over the prior year has been in the the leisure, hospitality and retail sectors, lower paying categories. Job growth in the generally higher-paying sectors of information services and cybersecurity have lost ground. According to the county’s data, this slower economic growth and fewer higher-paying jobs have begun depleting the county’s coffers, while demand for services, as exemplified by the 2016 Fairfax County Human Services Needs Assessment, is on the rise.

Fairfax County’s high office vacancy rate is also having a negative impact on the budget. According to Long, of 116.4 million square feet of office space in the county, more than 20 million still sits empty. Even more worrying on this front, studies show that 73 percent of the the region’s office space is obsolete and just can’t meet the technology and work space demands of today’s business marketplace.

Long also produced statistics that show the local housing market still underperforming against the nation’s figures during 2016. With so much of the county’s revenues relying on real estate taxes, it doesn’t help matters when more than half of the 342,000 residences in the area saw no change or a decrease in their property’s assessed value.

Still unknown in the final budget evaluation is what effect the state’s yet-to-be-approved budget will have, as well as uncertainties surrounding the new federal administration.

The board’s next budget committee meeting is on Feb. 21.

SUPERVISOR Pat Herrity (Springfield) said in a statement: “It is again obvious by today’s proposed budget that we desperately need to do something about our unsustainable pension costs. … I believe it’s time we refocus on our priorities like public safety, congestion relieving … teachers’ salaries, and helping those most in need, and not balance the budget on the backs of either our taxpayers or our employees. …The only way to fund our requirements is to set and fund priorities and reduce elsewhere.”

McKay and Supervisor John Cook (Braddock District) both expressed concern about figures showing that those least able to afford it seem to be facing the largest property assessment increases. McKay noted that in his district Habitat for Humanity housing ranked number three for the largest assessment increases in the area and questioned Long on “the math.” Long had no ready answer for this particular example, but promised that staff would look into the matter.

Cook questioned if the county executive had looked at inequalities and potential savings in programs like those that provide after-school care for all children at no cost, “even the children of millionaires who could afford to pay.” As for the lack of economic growth in the area, Cook said, “It’s been 12 years since we had more than 3 percent growth in the county. It’s time for the people across the river to stop this silly stuff and see to growth.”

Public hearings will be held at the Government Center on on April 4, 5 and 6. Those wishing to speak must sign up in advance.

The supervisors will be holding town hall meetings in their districts, and Long has committed to be in attendance to present the budget proposal directly to the public, and hear the public’s response and suggestions.

The Board of Supervisors’ meetings are recorded and available on the Fairfax County government website at www.fairfaxcounty.gov. Information about the meetings in each district is also available there, or call the local supervisor’s office directly for more information. The entire Advertised Budget Proposal presentation is also online. Citizens are also encouraged to participate in an online chat with Long on Feb. 24 from 3 - 4p.m. A link leading to a question submission for the chat can be found at the end of the “5 Things to Know About the FY 2018 Budget” on the county website.