The Little Theatre of Alexandria Presents ‘The Fabulous Lipitones’
Votes

The Little Theatre of Alexandria Presents ‘The Fabulous Lipitones’

Musical comedy about a barbershop quartet tackles racism and other issues. 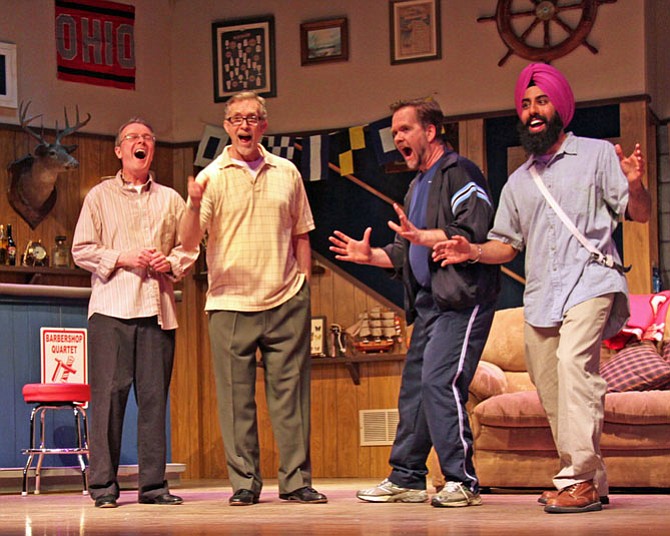 Kneeling in front is Gurpreet Sarin; back row, Jerry Hoffman, Peter Halverson, and John Brown, rehearsing a scene from LTA's production of "The Fabulous Lipitones."

Jerry Brown (left) and Peter Halverson rehearse a scene from "The Fabulous Lipitones."

The Little Theatre of Alexandria (LTA) is presenting "The Fabulous Lipitones" from April 22 to May 13. The musical comedy depicts what happens when a barbershop quartet is forced to take on an unconventional replacement when one of their members suddenly dies. When they meet face to face, the new guy is not what they expected. First-time LTA Director Chuck Leonard said: "When I read the show, I asked to direct it for a number of reasons; first and foremost, I love the comedy, which is family-friendly, yet hilarious. The subject matter is barbershop quartet singing and I have been an a capella fanatic for decades."

He said he loves how the characters are self-aware that their barbershop passions label them as “different," adding: "'The Fabulous Lipitones' celebrates the connection of people who have a passion for something that mainstream society labels as something of an awkward niche. I think there is a building acceptance of nerds in current society and a broadening of the definition of a nerd beyond science and tech types. I love to see my children and my students proudly wave their flags of difference, but barbershop singing shows that there has long been arenas for people with shared passions, to bond. The play also explores male bonding, as well as racism."

He said finding the right tone for a play that is so funny, but deals honestly with racism, was crucial to him. "Finding actors who could play this was a challenge, which was made more difficult by the casting limitations," he said. "Because of the themes of race and age in the play, the casting is quite specific. Furthermore, each character must fit a specific vocal part and the actors have to be able to blend voices in the barbershop style. I was incredibly fortunate to find the foursome we have."

Gurpreet Sarin plays the main role of Baba Mati Singh (aka "Bob"), who hops around the stage full of energy, optimism, humor and passion. "He loves singing and dancing and interacting with people, which makes him an ideal candidate for 'The Fabulous Lipitones' barbershop quartet," he said. "He's a Sikh man in his 20s, who's firm in his faith and excited at the opportunity to share his experiences with others. As the story unfolds, the rest of the characters learn more about Bob's faith and history."

Sarin said he was blessed to be part of the LTA production for a few reasons. "One, because I truly believe in the message this play delivers. Two, because this happens to be my first play. Being my first play, I experienced a unique set of challenges, as I was learning a bunch of things every day — but that's what has made this experience so wonderful. It's truly been an honor working with all of the cast and crew," he said.

He hopes the audience has as much fun watching the play as the cast and crew have had in bringing it to life. "I believe this play is about celebrating the uniqueness we have in America — I'm a firm believer that America is a 'melting pot' and that we shouldn't judge a book by its cover," he said.

Peter Halverson plays the role of Phil Rizzardi, the bass who runs a health club and fancies himself as a ladies' man despite the encroaching effects of middle age. "He's brash, ambitious, and passionate. This is a frequent source of friction between himself and the other members of the quartet, but the bonds they've forged through their shared love of barbershop quartet singing have always been able to overcome the occasional flare-up," he said.

He added: "Perhaps that's why Phil struggles the most to accept the changes following the unexpected death of their lead singer. The group has been his foundation, his emotional lodestone, and he's not sure what he will do now that it's different."

He said the role was larger than others that he's done, both in terms of dialogue to master and the complexity of the character. "My training and background is in vocal performance, so I'm accustomed to using the musical aspects of song — rhythm, harmony, dynamics — as means of expression when telling a story. With drama, however, the only thing you're given are words on a page. It's up to the actor to transform those words into something real, someone the audience cares about. I was a bit intimidated by this when I first started," he said.

"I hope people leave with a better appreciation for the art of barbershop quartet singing. It's a unique style, distinctly American, with gloriously rich harmonics and wickedly delicious contrapuntal lines, all of it infused with a wonderful joy," he said.

The Little Theatre of Alexandria is presenting "The Fabulous Lipitones" from April 22 to May 13. Show times are Wednesdays through Saturdays at 8 p.m.; Sunday matinees at 3 p.m. Tickets are $19 and $22. The venue is located at 600 Wolfe Street, Alexandria. Call the box office at 703-683-0496 or visit www.thelittletheatre.com.