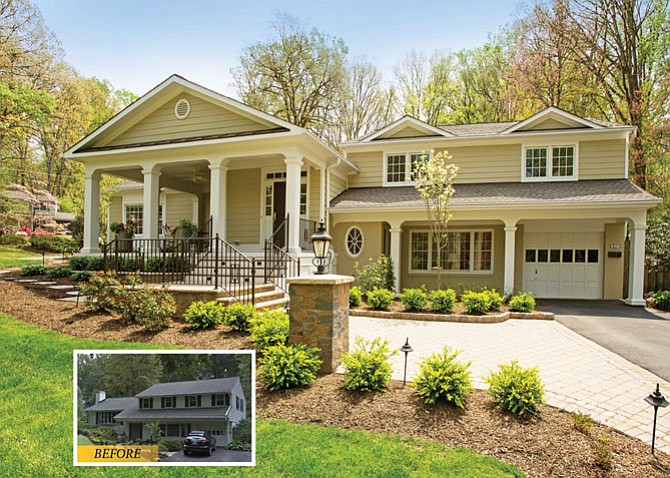 Sun Design Remodeling's conversion of a circa 1960's split-level into a neoclassical-style residence will be open to the public Saturday, April 29 and Sunday, April 30 from 11a.m.-5 p.m. The home, located at 9117 Glenbrook Road in Fairfax, was judged the best entire house remodel ($250,000-$500,000 range) in 11 states by the National Association of the Remodeling Industry (NARI). The remodeler added 300 square feet on the left side of the house, introduced a front veranda and elaborated the exterior in a new architectural language. Photo by Greg Hadley

By By John Byrd

Before: The roof overhang to this circa-1960's split-level was thought to restrict any practical consideration to re-designing the home's front elevation. On two occasions, the family hired architects to develop a solution — but nothing feasible resulted.

Homeowner Marie Torre says the new kitchen provides spaces for all her cooking utensils, even items that used to be stored in the basement. Replacing the roof over the main living area and raising the ceiling from eight to nine feet also makes the room feel substantially larger. The rear elevation “bump-out” with three divided light windows invites abundant natural light.

A remodeled home judged the best-of-category in an 11-state competition will be open to the public Saturday, April 29 and Sunday, April 30 from 11 a.m. to 5 p.m. The house at 9117 Glenbrook Road in the Mantua section of Fairfax is owned by Jack and Marie Torre.

Originally a split-level, Sun Design Remodeling converted the circa 1960s structure into a spacious neo-classical style residence. In March, the National Association of the Remodeling Industry (NARI) named the renovation the “best entire house remodeling” ($250,000- $500,000 range) in the southeastern U.S., a region that ranges from Florida to the District of Columbia.

The award was conferred in conjunction with NARI's annual “Contractor of the Year” (COTY) competition.

The Torres, who had purchased the original brick and siding split level in 1984, had been looking for a larger home when a meeting with a Sun Design consultant persuaded them that the original structure could be expanded despite earlier assessments to the contrary.

“We'd been told we couldn't add-on to the rear because of set-back restrictions,” Jack Torre said. “But the bigger problem was a six-foot roof overhang in front, and the seven steps required to walk from the ground level foyer to the primary living area. Because of this, we thought we were prohibited from enlarging the foyer, or expanding our living space around the kitchen.”

The 3,500-square-foot neo-classical style home now open for viewing showcases the kind of sweeping architectural re-invention that can occur when owners set their sights on longer occupancy.

In fact, as the Torres see it, the former property is no longer merely a house — it's their “long-term residence,” and one that is substantially more functional than they had ever thought possible.

“The prospect of lifelong occupancy invites people to create a more personalized living space” says Bob Gallagher, president of Sun Design Remodeling. “We find this kind of thinking much more common than in decades past.”

The Torres readily acknowledge the importance of Sun Design's vision — especially since they had hired architects on two separate occasions to develop plans that proved impossible to implement.

At the top of the list, the couple wanted a larger, more functional kitchen — and a larger dining room with distinctive formal elements, including a tray ceiling.

“The main structural solution entailed raising the front door to the home's primary living area,” Gallagher said. “This required extending the front foyer eight feet to get past the roof overhang. We also needed to re-design the front elevation to better rationalize the difference between the grade at ground-level and the home's main living area — a distance of about seven feet.”

What evolved was not merely a larger foyer, but a more appropriate architectural context for the whole in the form of a spacious, classically-apportioned front verandah that surrounds and presents the front entrance to the home.

The 44-square-foot foyer situated on a new front porch is aligned with a front door that opens directly into a center hall — setting up entry into the living room, or kitchen just a few feet beyond.

Meanwhile, the 300 square feet added on the home's west side houses a formal dining room and an adjacent rear-of-the house sitting area. The room includes a two-sided fireplace also visible in the living room. The enlarged kitchen accommodates a custom-designed banquette, and multiple storage pantries.