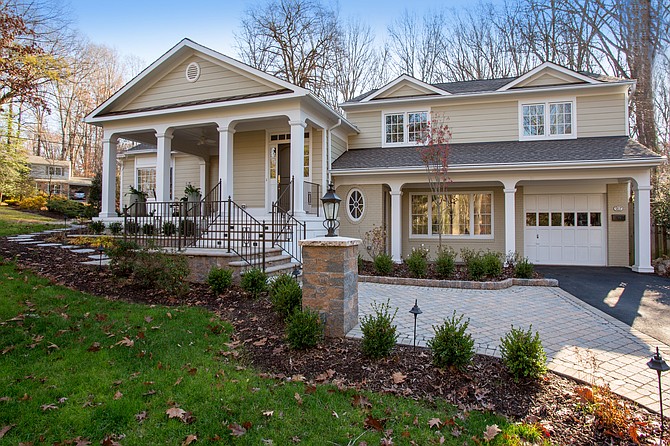 The new front elevation to the Torre home is done in neoclassical themes that respond to an enlarged floor plan incorporating both a 300-square-foot addition and a spacious front veranda. Photos contributed

BEFORE: The roof overhang to this circa-1960s split-level was thought to restrict any practical consideration to redesigning the home's front elevation. On two occasions, the family hired architects to develop a solution but nothing feasible resulted.

A circa 1960s split-level enhanced by a 300-square-foot addition, a reconfigured main level floor plan and a seamlessly remade front elevation will be featured in a “Remodeled Home Tour” sponsored by Sun Design Remodeling on Saturday, Jan. 9.

The house at 9117 Glenbrook Road in Fairfax is owned by Jack and Marie Torre. The residence will open to the public from noon to 4 p.m.

Purchased by the Torres in 1984, the original house was a classic mid-century brick and siding structure with an attached garage and three family living zones on separate half-levels where the Torres raised two children on the site and have lived for 31 years.

While the house holds fond memories, the spaces in a split-level often seemed restrictive to the couple who, on two separate occasions, hired architects to develop ideas for expanding the home's main level. Nothing really worked.

“We couldn't add-on to the rear because of set-back restrictions,” Jack Torre said. “The bigger problem, though, was a six-foot roof overhang in front, and the seven steps required to walk from the ground level foyer to the primary living area. Because of these factors, we thought we were prohibited from enlarging the foyer, or expanding our living space around the kitchen.”

More recently, with their life as empty-nesters imminent, the couple were considering relocation. A chance visit to a remodeled split-level not far from their house, however, convinced Marie Torre to once again consider the remodeling option.

At more than twice the size of its predecessor, the Torre's kitchen also has a substantial increase in natural light.

“I was amazed to see the kinds of creative solutions that are possible in a split-level,” Marie Torre said. “In this case, an existing split-foyer home had been converted into a charming French colonial with a wrap-around porch. There wasn't a trace of the earlier style, and the new interior was generous and open.”

Shortly after the viewing, the Torres contacted Sun Design Remodeling, the firm behind the makeover.

“A split-level presents intriguing challenges,” said Bob Gallagher, a principal at Sun Design Remodeling. “By sequestering key components of the house on separate half-levels, the intention was to give homeowners enhanced privacy zones within a comparatively small envelope.”

The style was cutting edge in the 1950s and 1960s, but, as Gallagher said, “As a preference for a more open plan has taken hold, a split-level can be seen as too compartmentalized. There's a sense that the primary living spaces aren't coherently organized into a working whole.”

At the top of the “wish list,” the couple wanted a larger, more functional kitchen — plus a larger dining room with distinctive formal elements, including a tray ceiling.

There should be a dedicated family room with a view of the tree-lined backyard, and a spacious powder room on the same floor as the kitchen.

The substantially enlarged gourmet kitchen envisioned would require a butler's pantry, and a wine refrigerator.

The split-level's former bow window was converted to a set of French doors which overlook the new veranda. Though the execution makes the addition hard to detect, the dining room beyond the fireplace is actually in the home's new dining room wing.

Still more challenging: the couple wanted to enter their home's primary living area directly from the front door rather than ascending seven steps within a cramped ground-level foyer.

Since new enclosed space couldn't be added on the rear, the east side of the house was designated for the new dining room/sitting room wing.

Still more problematic: under the current floor plan template, one entered the house from a narrow front foyer — ascending to a main level hall that segued to the living room (left), a set of staircases heading in two directions (right), or the kitchen straight ahead.

What was lacking, Gallagher said, was a “procession” in which rooms unfold in an orderly, inviting sequence.

“The structural issue was finding an optimal way raise the front door to the main level of the house,” Gallagher said. “This would require extending the front foyer eight feet to get past the existing roof overhang. We also needed to re-design the front elevation to better rationalize the difference between the grade at ground-level and the home's main living area — a distance of about seven feet.”

What evolved was not merely a larger foyer, but an improved and more appropriate architectural context in the form of a spacious, classical front veranda that surrounds the front entrance to the home.

“We were delighted as the plans for the front elevation began to shape up,” said Marie Torre. “It's a completely new architectural style, yet perfectly accommodates the square footage we needed to reconfigure the interior of the main living area.”

The 44-square-foot foyer now situated on a new front porch is perfectly aligned with a front door that opens directly into a center hall — setting up entry into the living room or the kitchen, just a few feet beyond.

Meanwhile, the 300-square-feet added on the home's west side houses a formal dining room and an adjacent rear-of-the house sitting area.

The room includes a two-sided fireplace also visible in the living room. The enlarged kitchen accommodates a custom-designed banquette, and multiple pantries.

Marie Torre said the gourmet kitchen provides spaces for all her cooking utensils, even items that used to be stored in the basement.

“This is really a completely different house,” said Marie Torre, “But one that is much more satisfying to occupy.”

John Byrd (byrdmatx@comcast.net) has been writing about home improvement topics for 30 years.