From Split-Level to Neoclassical
Votes

From Split-Level to Neoclassical 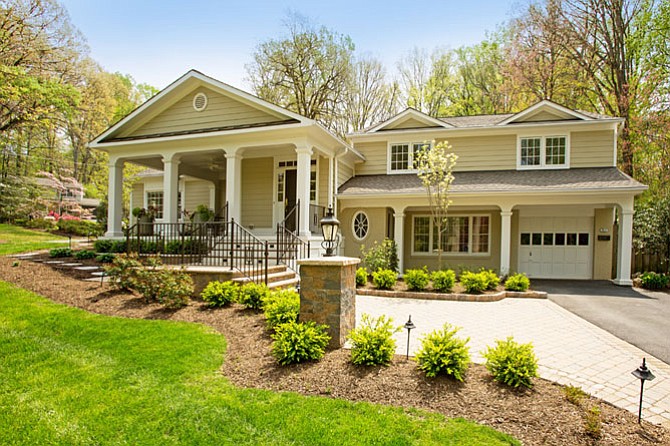 Best Whole House Makeover in 10 states: Sun Design Remodeling's conversion of a circa 1960's split-level into a neoclassical style residence has been named a regional “Contractor of the Year” (COTY) winner by the National Association of the Remodeling Industry. The remodeler added 300 square feet on the left side of the house. Photo by Greg Hadley

BEFORE: While owners Jack and Marie Torre wanted square footage for a larger kitchen and dining room, “set-back” rules prohibited building in the rear, and the front-facing roof overhang limited options for re-designing the facade.

The split-level's former bow window was converted to a set of French doors which overlook the new veranda. Though the execution makes the addition hard to detect, the dining room beyond the fireplace is actually in the home's new wing.

Converting a circa 1960's split-level into a spacious neoclassical-style residence has won Sun Design Remodeling a regional “Contractor of the Year” award from the National Association of the Remodeling Industry. The Fairfax residential makeover was named the best whole house remodeling in the “$250,000 to $500,000” range in a 10-state area that extends from Maryland and Florida to as far west as Tennessee. Owners Jack and Marie Torre have been so pleased with the outcome that they've held an several open houses just to show the changes to curious neighbors. Another open house will be held in the annual Parade of Home, April 22-23.

To accommodate the owner's requirements, Sun Design added a 300-square-foot addition, introduced a front veranda with a foyer, and elaborated the exterior in a wholly new architectural language.

The Torres had purchased the 3,000-square-foot brick and siding structure in 1984, and a found a perfect spot for raising children. As the children moved on, however, the couple recognized that the changes they wanted to make to the house were apparently infeasible.

“We couldn't add on to the rear because of set-back restrictions,” Jack Torre said. “The bigger problem, though, was a six-foot roof overhang in front, and the seven steps required to walk from the ground level foyer to the primary living area.”

The couple were actively looking at relocating when a chance visit to a Sun Design remodeled split-level nearby convinced Marie Torre to make an appointment with Bob Gallagher, the company's president.

In the first meeting, a “wish list” emerged that included a larger kitchen, a formal dining room with a tray ceiling, a family room with a view of the tree-lined back yard, and a spacious first-level powder room.

With these goals in mind, the design team focused on how best to configure the essential components within a well-integrated whole.

Since new space couldn't be added on the rear, the east side of the house was designated for the new dining room/sitting room wing.

Still more problematic: under the existing plan, one entered the house from a narrow front foyer — ascending to a main level hall that segued in three directions.

What was missing, Gallagher observed, was a “procession” in which rooms unfold in an inviting orderly sequence.

“The structural challenge was finding an optimal way to raise the front door to the main level of the house,” Gallagher said.

“This would require extending the front foyer eight feet to get past the existing roof overhang. We also needed to redesign the front elevation to better rationalize the difference between the grade at ground-level and the home's main living area — a distance of about seven feet.”

What evolved was not merely a larger foyer, but an improved and more appropriate architectural context that allows for a front verandah that surrounds and presents the front entrance to the home.

The new addition includes a two-sided fireplace visible in the living room. The enlarged kitchen now accommodates a custom-designed banquette, and storage pantries.

The gourmet kitchen, according to Marie Torre, provides spaces for all cooking utensils, even items formerly stored in the basement.

Replacing the roof over and raising the ceiling from eight feet to nine feet has made the living room feel substantially larger.

“This is a completely different house,” said Marie Torre, “One much more satisfying to occupy.”