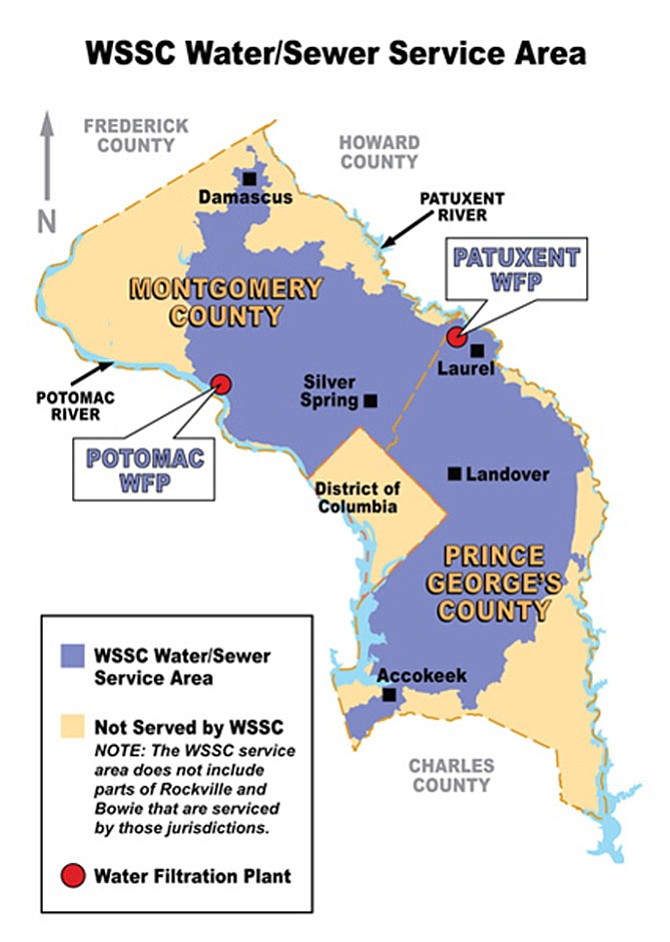 WSSC, whose service area is pictured here, is considering modifying its existing rate structures, which have been in place for 25 years. Image Courtesy of WSSC

“We talk a lot about affordability, but truly what kind of percentage are we talking about? Not to say that it’s not important, but again, are we now going to expend a tremendous amount of time and resources to address six people’s concerns because they’re very vocal or something?” — Ann Bui, Black & Veatch

“The reality is, in WSSC’s own case, they implemented a rate structure that was designed to promote conservation and they got conservation.” — Jay Sakai, 4 Tenets Consulting

After 25 years, the Washington Suburban Sanitary Commission (WSSC) is considering changing its rate structures. This entails a more-than-one-year review process on WSSC’s part that has been going on since June of 2016, WSSC Chief Financial Officer Joseph Beach said at a June 30 meeting on the matter.

WSSC is in the middle of holding multiple workshops to consider alternative rate structures for Fiscal Year 2019, according to WSSC Deputy General Manager for Administration Thomas J. Street. WSSC plans to send their rate structure recommendations to the Montgomery and Prince George’s County Councils by the end of September with a goal of determining the finalized rate structures by June of next year, he added.

WSSC takes into account numerous policy considerations when determining rate structures including the rate based on cost of service, according to Beach. This includes customer service costs and the earnings received from customers, he added.

“Then you want to consider other policy such as conservation, affordability for customers, the impact on fixed-income and low-income customers, the ease of understanding, the ability to implement [and] possibly more,” Beach said.

Beach described the June 30 meeting as a “Rate 101” for WSSC commissioners. This meeting provided the commissioners with information for future discussions on rate structures, what policies they would consider and the effect of rate structures on how much customers pay, he said.

“It was clear that the commissioners are concerned about affordability, conservation, and other policies,” Beach said.

WSSC convened its next meeting on rate structures on Thursday, Aug. 3. WSSC Chair Thomasina V. Rogers said that meeting was held to look beyond cost-of-service analogies and methodologies in deciding on rate structures and for commissioners to decide which policy considerations were of most significance to them in establishing these structures.

“What we expect to get out of this meeting today is a discussion and yes, education, if you will, of the policy issues that are consistent with the vision and values of the WSSC and how to achieve them,” Rogers said at Thursday’s meeting. “Chief among them are affordability and conservation.”

Raftelis Financial Consultants’ Chris Woodcock, Bill Stannard and Harold Smith presented information to the commissioners on pricing policy considerations. Rogers commented that WSSC would like information about how other areas of the country are tackling this issue.

The team from Raftelis Financial Consultants then presented information about affordability more specifically. WSSC Director of Customer Service Crystal Knight-Lee discussed the importance of examining affordability in the long-term context. Black & Veatch’s Ann Bui added that her company had determined that cost of service had taken priority over affordability in previous studies on rate structures.

“We talk a lot about affordability, but truly what kind of percentage are we talking about?” Bui asked. “Not to say that it’s not important, but again, are we now going to expend a tremendous amount of time and resources to address six people’s concerns because they’re very vocal or something?”

Afterwards, Lee presented information on WSSC’s affordability programs. WSSC Commissioner Howard Denis raised his concern that while helping those with less money is important, it is also important to have a readily available water supply, especially given the effects of climate change. Woodcock acknowledged Denis’ point, recalling the 1960s drought and the Boston area’s response given it has had a large water authority.

No one in the audience had comments to offer and, after a recess, Jay Sakai of 4 Tenets Consulting discussed Maryland conservation law and policy. Denis asked about whether incentivizing is essential to achieving good water quality and conservation.

“There’s a lot of evidence that pricing and water usage are linked,” Sakai said. “The reality is, in WSSC’s own case, they implemented a rate structure that was designed to promote conservation and they got conservation.”

Bui concluded by presenting information on cost basis. Black & Veatch aims to connect the cost with those who create the cost burden and allow for adequate recovery among different customer groups, Bui said.

“People ask ‘Why do a cost of service? Why do we care?’” Bui said. “You can’t determine then unless you do a study of that nature to make sure that the level of service that you are providing to your different customer classes, you’re actually recovering the appropriate money back from these classes to pay for that level of service, and that provides a benchmark.”

The six WSSC commissioners then ranked the different policies in terms of which were most important to them. Smith announced that the top three policy considerations in the order of which received the most votes were revenue stability, conservation/demand management and rate stability, the following three were affordability, ease of understanding and ease of implementation, and the bottom two were minimize customer impacts and cost-based rates. This order will determine which policy considerations are most important when the staff return with alternative rate structure proposals, according to Street.

Smith added that all of the policy considerations were deemed important by the commissioners in their rankings, but the rankings just provide an order of which they deem to be the most important. Stannard said consultants as well as WSSC finance staff and commissioners will also assess current WSSC rate structures based on the rankings.