Food Truck Amendment Voted Down by Town Council in Herndon 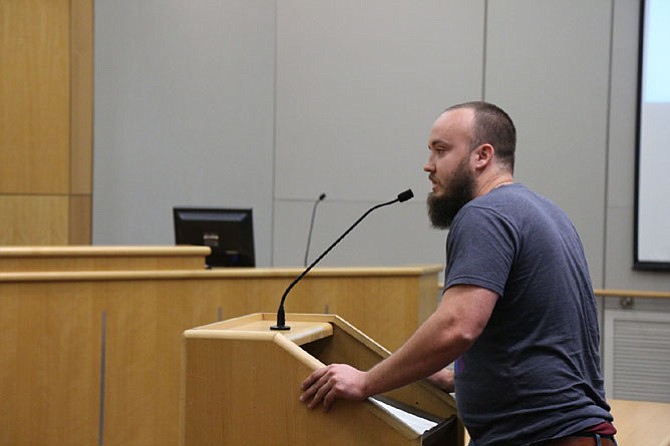 Andrew Kelley, co-founder of the Aslin Brewery Company, testified in favor of allowing his company to operate a food truck on their property without time limits. Photo by Fallon Forbush.

“If someone wanted to put a trailer in my neighborhood, I would be having a heart attack.” — Councilmember Sheila Olem

The Herndon Town Council proclaimed Sept. 15 as POW/MIA Recognition Day, which honors the commitment and sacrifices made by America’s prisoners of war and those who are still missing in action and their families. Herndon/Reston American Legion Post 184 Commander David Womack (center) joined the council and town staff to accept the proclamation.

The Herndon Town Council proclaimed Sept. 15 through Oct. 15 as Hispanic Heritage Month, which recognizes that Americans of Hispanic and Latino heritage have a positive influence on the town’s community. Nury Mena, co-chairman of the Hispanic Business Council of the Dulles Regional Chamber of Commerce (center), and Valerie Kaiser, partner of Elden Street Financial and executive board member of the Dulles Regional Chamber of Commerce (far right), joined the council and town staff to accept the proclamation.

During a public hearing on Tuesday, Sept. 12, the Herndon Town Council unanimously voted against consideration of an amendment to the Town of Herndon Zoning Ordinance that would have allowed food trucks to operate for an unlimited amount of time.

Food trucks are currently allowed in the town, but hours are limited. Food trucks cannot be operated on any street within the town; they can only park on property with permission from the tenant, owner or operator of the property. Food trucks are also limited to no more than 21 hours of operation a week, the seven-day period extending from Sunday morning through the following Saturday.

The amendment would have allowed food trucks to operate on private property within allowed zoning districts without time limitations.

“I fully expected it [to be voted down],” said Andrew Kelley, co-founder of the Aslin Brewery Company. “Food trucks drive economic development. They actually drive foot traffic … because there are more options. Being able to convey that to an older generation has been tough. That’s what we’re trying to do.”

There were several older residents who attended and spoke against the amendment. The councilmembers agreed with them.

“I think we have worked so hard to really revamp the downtown and make it this wonderful place that people want to come that I think this is going backwards,” Councilmember Sheila Olem said during the hearing. “If someone wanted to put a trailer in my neighborhood, I would be having a heart attack. To me that’s kind of what a food truck would do. This is our historic downtown.”

KELLEY AND HIS COMPANY were the ones to petition the town to relax its rules on food trucks. The brewery is located in the Sunset Business Park and will open a second location downtown.

Kelley and his colleagues thought a permanent food truck could be a good solution to provide its downtown customers with more options until it fully builds out the space. They also thought it could be a solution to keep business going during anticipated construction for the redevelopment of downtown.

“We would have to have a larger site plan to add a kitchen at this point, so in the interest of time and after our tasting room has been shut down, we thought a food truck would be a good introduction to our permanent option, while we further develop the site in downtown,” he said.

Town staff recommended a down vote for the amendment because they did not approve of the language and the implications it could have: Allowing food trucks to become permanent fixtures.

“We’re happy to work with the applicant to find out if maybe there is some other type of business model that would work for them; and if that includes maybe a more minor change to the food truck ordinance, staff might be able to support that and we would bring that back to you as an initiating resolution,” Lisa Gilleran, director of community development for the town, said during the hearing. “But right now, we think this is way too broad.”

“We as the town came down to [the food truck ordinance] as looking at it as a temporary use, and that’s one of the reasons why we have the limitation in the number of hours for any given food truck is that we want it to definitely be temporary and accessory to the primary use of the property,” Gilleran added.

Though the amendment failed to move along in the process for approval, the council was adamant to reassure Kelley, who was present for the vote, that they want staff to work with him so the brewery could thrive in downtown.

“I know that the applicant that has brought this forward is an owner of a wildly popular business in Herndon that is moving to downtown who has grand plans for expansion; and if this is denied, I do trust that the staff will work with him and try to find a solution that helps get them over the hump and help them meet their goals, but while also meeting the goals of the downtown,” Mayor Lisa Merkel said during the hearing prior to the vote.

“I think I can safely say the council is excited about this particular new project in downtown and we want to do what we can to help make a suitable solution so that they can meet their goals and we can have an exciting brewery in downtown Herndon,” she added.

Also during the meeting, the council: