Restonians Speak Out on Density Increase

Restonians fill the auditorium and side room for the County of Fairfax Planning Commission Meeting Jan. 23. Photo by Mercia Hobson. 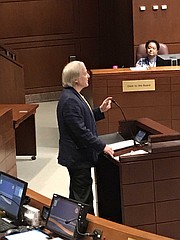 Dennis Hays: "The key for Reston's continued success is found in the guiding principles of the Reston Master Plan.” Hays said community participation had not been honored in the development of proposals.

Given the number of speakers at the County of Fairfax Planning Commission Meeting Jan. 23, 2019, Zoning Amendment-Article 6- Density Provisions for the Reston PRC District (Hunter Mill), here is just a sample of remarks by individuals who represented a cross-section of thoughts, ideas and concerns.

Mark Ingrao, President and CEO of the Greater Reston Chamber of Commerce (GRCC) said he supported the PRC Amendment and his remarks represented the 600-plus member companies that, through the chamber board, supported the PRC Amendment. "Once the Reston community went down the path of funding the Metrorail extension, the paradigm in Reston was going to change. ... Our founder (Robert Simon) knew this Master Plan would support his vision. … Stable residential neighborhoods, as one moves from the Transit Station Areas are protected. The plan calls for the highest commercial and residential density be at the TSAs. … A diverse housing stock is expressly protected under the plan. ... The concern of the Task Force was not that we would have too much residential but that we might not get enough to achieve optimal jobs-to-household ratios. … Adequate transportation infrastructure and programs, and other infrastructure components such as schools, parks and other public facilities should occur with development. … $2.4B of transportation-related infrastructure is planned, and dedicated revenue streams are already in place. ...It took Reston over 50 years to reach its current population, and it will likewise take decades to achieve anything close to full build-out under the Plan."

John Mooney spoke as a representative of Hampton Pointe Condo Association in Reston. He urged not to adopt the proposed PRC amendment but instead that the consideration of any PRC ordinance change be coupled with the next review of the Reston Master Plan. "The County has very likely underestimated the amount of traffic generated by the new development in the Transit Station Areas...The County’s 2018 Reston Network Analysis: Final Report modeled how new TSA-generated trips will impact TSA Reston but did no modeling of their impact on non-TSA Reston. Those new trips will very likely create significant cut-through traffic as mounting TSA congestion leads drivers to find new routes through non-TSA Reston into and out of the TSAs."

Sherri Hebert, a member of the Board of Directors of the Reston Association, and the immediate past president urged the Commissioners to reject the proposal to increase the population density of the PRC areas of Reston. "RA is convinced that no genuine community planning process would endorse 50 dwelling units per acre over the entirety of the non-residential portions of these village centers (Hunters Woods, South Lakes and North Point) ... RA believes that any change to the PRC zoning must be done concurrently with a review of the Master Plan. We believe this Commission was right when you raised concerns about having “uncoupled” planning and zoning for the PRC when the Commission approved Phase 2 of the Reston Master Plan revisions in 2015."