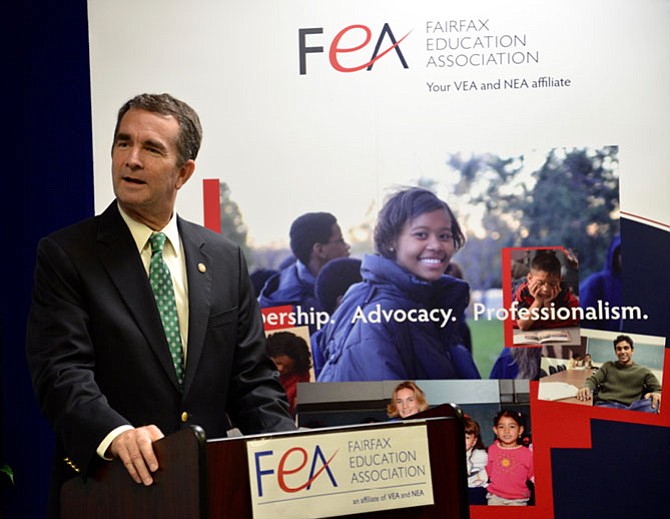 Lt. Gov. Ralph Northam, the Democratic candidate for governor, outlines his platform on public education in Virginia at the offices of the Fairfax Education Association. Photo by Andrea Worker. 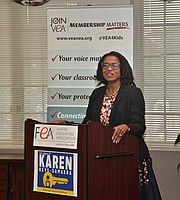 Karen Keys-Gamarra, a Democrat running for a position on the Fairfax County Public Schools Board, has received the endorsement of the Fairfax Education Association. “You need to be fully served and well equipped by your school board, and I want to make that happen.”

Gubernatorial candidate, and current Lt. Gov. of Virginia Ralph Northam, visited the Fairfax Education Association’s (FEA) offices in Fairfax on Thursday, Aug. 24, to outline his educational platform and offer his thoughts on the importance of education in the Commonwealth.

“I attended public schools,” Northam said to a conference room filled with association officials, educators, and phone-bank volunteers. “I remember the names of every teacher I had from kindergarten through high school. Public education is one of the reasons I am standing here today and why I have been able to do the things I have done.”

The FEA, an affiliate of the Virginia and of the National Educational Associations, has endorsed Northam for governor, and given their support to Karen Keys-Gamarra, a Democrat who is running for the Fairfax County Public Schools Board. Keys-Gamarra also attended the event. She said that her experiences on the campaign trail have made her believe “more strongly than ever that we need to fight for public education. You [educators and administrators] need to be truly served and equipped by your school board.”

In her introductions, National Education Association Secretary-Treasurer Princess Moss described the upcoming State elections as “life or death to public education in our Commonwealth.” Moss pointed to Northam’s record on supporting early childhood education and said “Ed Gillespie [Northam’s Republican opponent for governor] will not do that.” Citing financial support for Gillespie’s campaign by the family of Secretary of Education Betsy DeVoss, Moss added “he [Gillespie] will rubberstamp her agenda, pushing for more voucher programs and taking resources away from public education.”

Northam praised Governor Terry McAuliffe’s administration’s work toward building the “new Virginia economy,” much of the success of which he said is based on “our acknowledged world-class education system and workforce training.”

Going forward, the strategy for developing the priorities for Virginia’s public education requires “determining what 21st century jobs look like,” Northam said. A combination of reinforcing the basics and developing curriculum, resources and opportunities in “STEAM” – Science, Technology, Engineering, Arts, and Math – is the answer, according to Northam. “And add an “H” for Healthcare, so now it’s STEAM-H!”

Northam, Keys-Gamarra and the Educational Associations say that moving toward a voucher-system for schooling will mean less people will be prepared for those “new economy” jobs. Too many schools struggle today to fund their programs and to offer enriching electives to all students, they said. In their estimation, stripping those limited resources to provide “vouchers for some” will have disastrous effects on public education and the welfare of Virginians.

The highlights of Northam’s education platform include:

“People always talk about a politician’s legacy,” said Northam. “I don’t know about that. I just know I want to see world-class public education available to all our children in the great Commonwealth of Virginia.”