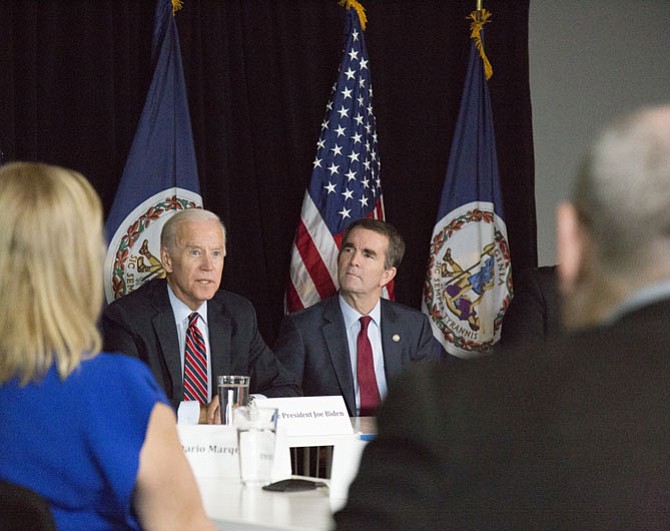 “This is a guy who understands what my dad always taught me, for real … ‘Everyone, everyone, everyone in the world is entitled to be treated with dignity,’” former Vice President Joe Biden (left) said of Democratic gubernatorial candidate and Lt. Gov. Ralph Northam (right). Photo by Fallon Forbush. 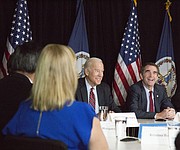 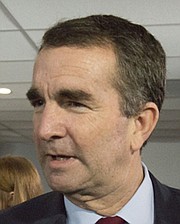 There are only three weeks left until Election Day and the race for the commonwealth’s next governor is heating up. Candidates are bringing out the big guns of their political parties.

The pair were touting the candidate’s “G3: Get Skilled – Get a Job – Give Back” workforce development campaign proposal, which would provide free community college educations to Virginians.

“The 21st century jobs, as you know, are much different from when I was growing up,” Northam said during the roundtable. “Even at the high school level, we could put a lot more emphasis on vocational and technical training,” he added.

THROUGH THE G3 PROGRAM, commonwealth funding would be used to cover tuition and fees for any Virginian who would like to pursue a workforce training credential or an associate degree from the commonwealth’s community college system in a targeted, “new-collar” job area, including cybersecurity, computer programming, clean energy, healthcare and other “high-need” areas. In return, students would be required to commit to one year of paid public service for program beneficiaries after their studies are complete.

“It allows them to do that without incurring any debt with the understanding that once they have become certified that they will give back a year of public service with pay,” Northam said to applause. “It allows everybody really to achieve the American dream,” he added.

Biden was “excited” to lend his middle-class moniker to the campaign.

“I know they call me ‘Middle-Class Joe,’” Biden said during the roundtable. “In Washington, that’s not a compliment. And I know what it means; it means you’re not sophisticated.”

Biden said Northam’s authenticity is what earned his seal of approval.

He didn’t want to speak ill of Gillespie, but he generalized.

“The difference between the Republicans generally … is that they don’t think ordinary people can do extraordinary things,” he said.

“Ordinary” people can meet the skill gaps and employment vacancies in information technology, nursing and other “new collar” industries as long as they’re given the chance, Biden said.

But it won’t be cheap.

“As we say out there; there’s no free lunch,” said Northam, Army veteran, doctor and medical practice owner.

The plan would take a large investment from the commonwealth’s coffers, which has already budgeted more than $36 billion for education in its fiscal year 2017 and 2018 biennium budget.

“There will be an initial investment,” Northam said. “We have estimated that to be $37 million. But after five years, it actually pays for itself because we have more, better, high-paying jobs in the commonwealth and that revenue comes back to the state. So, it’s a program that allows individuals to go without incurring any debt and that at the end of the day, will bring money actually back to the Commonwealth of Virginia.”

The Virginia unemployment rate is low at 3.8 percent with most jobs in government and the professional and business services industry, according to the U.S. Bureau of Labor Statistics.

Reston, however, was likely not the target audience for Northam’s message.

This is because the median household income in Reston is greater than $110,000 and more than 66 percent of the population 25 years and over possess a bachelor’s, graduate or professional degrees, according to the U.S. Census Bureau.

“It was just great to have [Biden] come in here and really get people enthusiastic,” Northam said. “As you know, we have an election on Nov. 7, but at the same time, we need to be prepared after that date to move Virginia’s economy forward and we do that through preparing our workforce for 21st century jobs.”

The Northam campaign is hoping voters lean blue once again for the commonwealth’s highest office. So far, polls are promising: Northam leads Gillespie 51-41 percent, according to the latest Quinnipiac University poll released on Sept. 19. Libertarian candidate Cliff Hyra gets 3 percent.

According to the Fairfax County Office of Elections, 2,901 absentee ballots have already been submitted for the upcoming general election. As of Oct. 5, 1,170 were submitted by mail and 1,731 in person at the county’s 10 absentee voting locations.

The deadline to apply for an absentee ballot is 5 p.m. on Tuesday, Oct. 31. Absentee ballots must be delivered to the Office of Elections by Election Day, Nov. 7, at 7 p.m.

The deadline to register to vote or update an existing registration for the upcoming election (Monday, Oct. 16) has already passed. Virginia voters can access their voter record and locate their designated polling place through the Virginia Department of Elections Citizen Portal at www.Elections.Virginia.gov/Citizen-Portal.